There’s a Time and a Place for Poker

I’ve just returned back home to Israel after a month-long trip to the U.S. with my family. We were on the East Coast and did a massive 3,000 miles of driving, including a road trip from New York to Atlanta and back.

As you could well imagine, one of the things I love to do while I’m in the States is play poker, especially as there are no live poker rooms in Israel. This was meant to be a different kind of trip though, with the focus on my kids. It’s not as though I made an overt promise to my wife or anything, but it was more of a silent, mutual understanding. Aged 9, 7, and 5, we knew we’d be responsible for providing our kids with a constant flow of activities and had planned for this accordingly. Coming up with daily activities for little kids is certainly time consuming and carrying out those activities, namely keeping up with them and their boundless energy, can really drain you (in more ways than one! #mypoorcreditcard). Between all of that and carving out some time to sit in front of the computer and work, I’ll admit that I was pretty tired by the end of each day. What better way to relax than play some poker, right?

Heading into the trip, I had mentally prepared myself for a month without playing. After two sojourns in Las Vegas earlier in the summer to do my own WSOP coverage and then work with Poker PROductions during the Main Event, I had spent over five weeks away from my family, and this latest trip was in part meant to try and make up for that time. Similarly, you’d think that a month without poker would be the appropriate “balance” to the numerous sessions I played during my stints in Vegas.

Well, poker doesn’t work like that, at least for a guy who loves playing the game as much as I do. An insatiable thirst for poker can’t ever be fully quenched. You can’t stay away for too long; the itch has to be scratched. As busy as I was, my mind turned to playing poker relatively often. There I was, in such a relatively rare (for me) situation, tantalizingly close to a number of great poker rooms…. and yet I wasn’t playing.

So jealous of the millions of people who can just drive to a poker room any time they want… Then again, it’s probably good that I can’t. ?

We were based out of the NY/NJ area for much of the time, so I kept on wishing I could head out to one of my favorite Atlantic City casinos, or perhaps head north to visit Foxwoods for the first time. The closest poker room was just under two hours away at Parx Casino, which I thoroughly enjoyed on my last trip there. But when could/would I go? Heading out to a poker room would necessitate anywhere from 4-6 hours of round trip driving. The only “free time” I had was at night, and it’s not as though I hadn’t pulled some all-nighters for poker before, but I needed to be well rested for each subsequent day’s activities. I’m crazy enough about poker to go to great lengths to play, even for just a couple hours, but that would have been the “logistically irresponsible” thing to do while on my family vacation.

I happily would’ve taken part in a local home game, but unfortunately I faced a couple of critical “obstacles” with that idea as well:

To be sure, I was having an awesome trip and truly enjoying myself. I just missed poker. I missed my home game. I missed the sounds of chips being shuffled and stacked.

It’s one of those days where I just feel like playing home game poker all day long. Here’s how I’d keep it exciting: https://t.co/U3WRwHN2XO

One Tease Too Many

Just over midway through my trip, my desire to play had reached a fever pitch. I have to hand it to the marketing teams. In a similar way to how Spanish online casinos have gotten great at online advertising, the land-based casinos in the Northeast have gotten pretty good at offline advertising. Billboards, buses, “Adopt-A-Highway” signs, rest stop brochures; when you REALLY want to play some poker, you notice it everywhere. Heading south past Washington DC on I-95, we passed right by the beautiful MGM National Harbor. I was dying to go in (especially after reading Jack Laskey‘s poker room review), but the timing just wasn’t right. 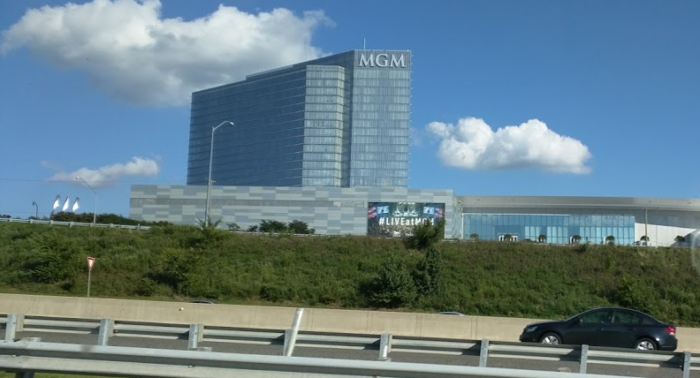 At some point I just couldn’t take it anymore. I knew that I’d be kicking myself for a long time if I ended up flying back home without having had even just one poker night for myself. Towards the tail end of our road trip we’d be passing through and sleeping in Baltimore for a couple nights. This would likely be my one realistic chance.

Hypothetically, Horseshoe Baltimore or Maryland Live! tonight, and please explain why. Please keep it positive. Never been to either.

When I finally found the right moment to ask, and noted that the nearest casino was just 20–30 minutes away, Miriam’s “sure, go!” was music to my ears 🙂 . Thus, my next post is a review of my poker night at Maryland Live!

Now I sit back here in Israel wondering if I should’ve asked for two “nights off,” but I suppose there’s a time and a place for everything. All those beautiful poker rooms are once again thousands upon thousands of miles away.

…and I’ve got the itch once again. Three cheers for home games!