A Stroll Around Poker’s Hallowed Halls at the WSOP

I suppose you could say that my first visit to the World Series of Poker, a few scant weeks ago, started off in the wrong place. 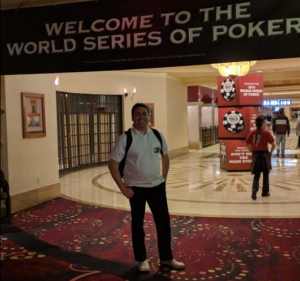 Not realizing that there was a distinct parking lot on the far side of the property and a separate, direct, entrance there to the Rio’s Convention Center area, my Dad and I parked and walked in through the hotel-resort’s front entrance. Dad gripped my hand tightly, and I’m sure he felt me trembling with excitement, as we followed the signs to the far end of the complex.

WATCH THE VIDEO: My First WSOP

Sitting and reflecting on the experience now, back here in Israel, that incredible feeling still hasn’t worn off. Time seemed to slow down as, slowly but surely, I approached poker’s grandest theater. My eyes darted, Ivey-like, from right to left and back again, trying to take the entire scene in. After all those hours spent in front of TV and computer screens consuming WSOP footage over the years, what and who would I recognize first?

Then, I saw it in the distance. A black banner draped across the width of one of the hallways with a white-lettered greeting: “Welcome to the World Series of Poker”. I looked down at my phone – it was 11:18 pm on Monday, June 20th, 2016; that’s the moment my “poker life” changed forever. After 13 years of yearning, I had finally reached “Destination WSOP“.

After picking up my media credential, I asked where WSOP Media Director Nolan Dalla was seated. After forging a great relationship with one another over the last couple of years and using social media to keep in touch, I couldn’t have pictured a warmer in-person welcome; it was a true pleasure finally getting to meet him for the first time. Nolan was kind enough to give me and my Dad “a tour of the place”. “You’re standing in the Amazon Room,” he said. “There’s also the Pavilion Room and the Brasilia Room.” I’m usually not at a loss for words, but during those few minutes I sure felt like a deer in headlights, simply overwhelmed by the occasion. Of course I knew where I was, but it felt too surreal. 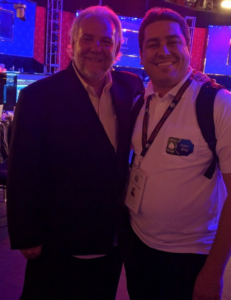 Most things don’t appear the same during the day as they do at night, and the World Series of Poker is no different. Thus, I also thoroughly enjoyed “tour #2”, which I got the next day when I met Kevin Mathers (a.k.a., Kevmath) for the first time. Actually seeing the masses throng the hallways, I suppose that’s when things started to feel a little bit real.

Taking It All In, Bumping Into Poker’s Superstars

Over the next few days, I would spend a good deal of time walking around the Rio, witnessing up-close a poker world that had been painfully out of arm’s reach for far too long.

The sheer enormity of the World Series of Poker is difficult to describe, but my feet can attest that I did my fair share of walking around. For the six days and nights that I got to spend at the WSOP, it seemed as though every new step I took brought along new delights. Every place I looked I was surrounded by poker and it’s standout performers. All those faces and Twitter handles I’d gotten so used to seeing were suddenly real, walking those halls along with me.

To any Las Vegas local, Rio employee, or tournament circuit grinder, bustling WSOP hallways full of poker celebrities are “the norm”. For a poker fan who lives half a world away, having the briefest of opportunities to be immersed in that mythical poker culture is practically indescribable. So many things happened over those few days that have given me so many mini-stories to tell. Here’s a small sampling: 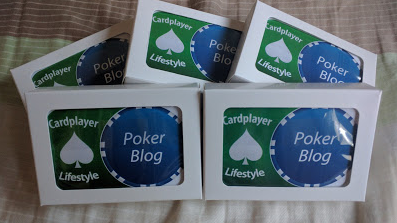 I decided to give out close to 150 decks of branded Cardplayer Lifestyle cards while I was in Las Vegas. When was the last time anyone looked at a business card, right? A free deck of cards though? THAT, someone could use 🙂

Anyhow, among the recipients were Jason Mercier, who got engaged about a week later, and Brian Rast, who won the $50K Poker Player’s Championship a few days after that. Now, I’m not going to claim that my decks bestowed upon Mercier and Rast any sort of magical “run good”, but if great things start happening to the other 148 deck recipients in the coming weeks , you’ll know why… 🙂

I gave another deck of cards to Jason Somerville, who I had first met at the PCA six months ago. Walking through the Pavilion Room, I noticed Jason playing at a table where he was seated next to actor James Woods. I stood there, observing quietly for a minute, when Jason looked up. He immediately spring out of his seat, and greeted me with a big hug, saying “Robbie, SO nice to see you again!” After a couple minutes of catching up, I asked Jason if he wouldn’t mind giving Mr. Woods a deck of cards as well. He did far more than that, saying some incredibly nice things about me and this blog to Mr. Woods. I’m blushing just recalling the experience, but hopefully next time I won’t be so bashful and will go up to Mr. Woods myself for a proper introduction.

I felt a constant need to take pictures of everything and everyone. Happiness was bursting out of me. I had to do everything in my power to document the experiences.

After almost a week traversing those Rio hallways, I wanted to somehow pack it all up in my suitcase and bring it home with me. Of course, I’m hopelessly addicted to that WSOP poker drug, already looking forward to the next time I’ll hopefully get to make it back to those hallways and experience everything all over again. 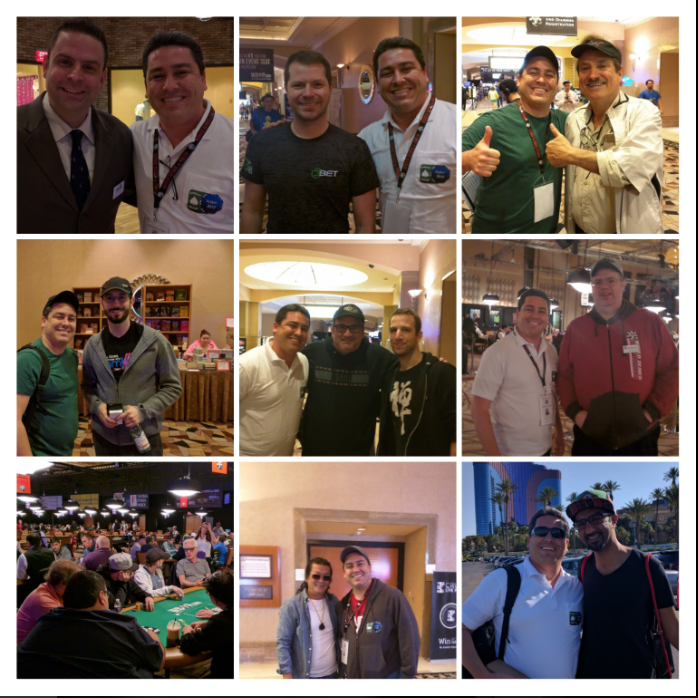 There’s so much more that I experienced during my first trip to the World Series of Poker that I’d like to share with you, and I will in future blog posts.

For now, I’ll just end off by saying that while I may have started my maiden WSOP pilgrimage off in the wrong place, I sure ended up in the right one 🙂 .