Welcome to stop number five on the Great American Poker Trip. If you are just joining us, my name is Jack Laskey and I’m a co-host of the Just Hands Poker Podcast. My co-host (and fellow Cardplayer Lifestyle contributor) Zach Resnick and I threw some stuff in a car and are taking a road trip across America playing poker and seeing the country. Here, I am recounting highlights from the trip and taking a deeper look at the poker culture I’ve experienced throughout my journey. Last week we were in Tallahassee, and now we are in Biloxi, Mississippi.

My hotel evaluation process for poker trips takes in three important factors; distance from the casino, price, and risk of bed bugs. It’s a minimization operation at its finest. In my search, I noticed, but did not give that much thought to the fact, that all of the casinos in Biloxi were located on a small strip-like island in the Gulf of Mexico just south of the mainland. As I journeyed from my likely bed-bug-free AirBnB across a long bridge to this island of casinos, the nature of this sturdy sandbar suddenly became extremely apparent.

Unknowingly, I’d stumbled upon the Southern gambler’s Mecca. This was a glowing (literally) bastion of class and degeneracy. Towering, glorious casino hotels were flanked by 24-hour fast food spots, dingy strip-clubs, and tiny beaches that were more for show than for swim. This was Vegas on the beach with breathing room and some cheap eats. Who knew?! Well, probably a lot of people, but not me and not many of my Yankee pals, many of whom were similarly ignorant of the existence of this fine gaming outpost. This discovery gave me a renewed sense of vigor, both on my current journey as well as for future explorations. 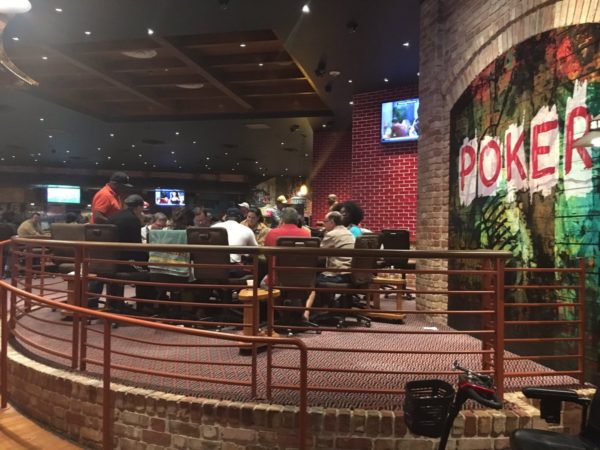 Back in Tallahassee I received some fervent advice to take my poker talents to the Beau Rivage. I was warned that the games weren’t what they used to be (never heard that one before…), but that the action was still excellent on the weekends. Luckily, it was Friday night, and the Beau Rivage poker room was bumping. After weeks in the dingy racetrack/card rooms of Florida, it was revitalizing to be in an over-the-top elegant establishment. The crowd was much more reminiscent of Vegas than a local casino. People were dressed to impress, likely engaging in some combination of gaming and partying rather than the drink/smoke/pull-the-lever grind. I was pumped, and not just from the artificial daylight.

After a brief buzzkill upon discovering that of the 10 or so poker tables running only one was $2/$5, I was given an exciting piece of news: all of the games at the Beau Rivage are uncapped. In the past, any uncapped game I’d found myself in was too big for me to take advantage of potential starting stack-depths. At $1/$3 or $2/$5, it’s a different story. Greater stack-depths often magnify the mistakes of amateur players. Price insensitivity is a rampant and expensive quality. It had been a while since I was this thrilled to sit in a $1/$3 game while I waited for $2/$5. 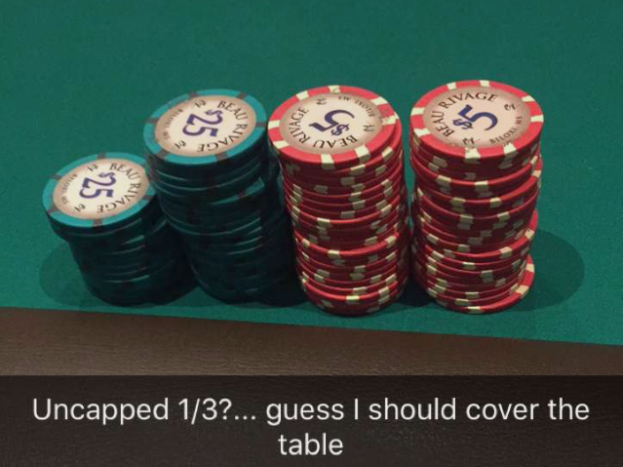 As excited as I was about the uncapped $1/$3, it didn’t take long for the floor to come by and whisk me away to $2/$5. Sitting down at $2/$5 at Beau Rivage was simultaneously the closest and farthest I’ve ever felt to being at home in a new casino. The alien qualities of this game were to be expected. I was greeted by one of the classiest old-school Southern accents there is by the archetypal Southern gentleman. A conversation that did not include me quickly revealed the cunning and ruthless businessman underneath the sophisticated exterior, a predictable alter-ego in this environment. The long and short of the matter was hiding oil money offshore and retreating underneath the “ignorant Southern guise” when confronted by the national authorities. “What would a good ol’ boy from the South know about Lichtenstein?” While the occupation and the dialect differed, it just goes to show the entrepreneurial spirit of the poker player.

So you may be asking yourself, how could I have felt so at home playing with oil barons in an uncapped poker game a few hundred yards south of the Gulf Coast. Simple, I knew everyone! OK, I didn’t know everyone, but I knew 3 out of 8 players in the game. I was utterly shocked to see so many familiar faces, and they were shocked to see me. A guy I’d played with in $5/$10 at the Palm Beach Kennel Club immediately greeted me. Playing together in two poker games separated by 700 miles in the same week served as an impetus for us to make more formal introductions. In time, I reacquainted myself with my other chums, one of whom was a particularly prickly pro who actually remembered some of the needles he used to unsettle me over a year ago at Maryland Live! The other was a rec player who I played with at my single $2/$5 table my one night at the MGM National Harbor the first night of the road trip. I’d even go on to run into one of the other players again in New Orleans a day later. Like I said, I’d stumbled upon a Southern gambling Mecca. This familiarity allowed me to settle right into what was clearly a game among good friends.

Among those good friends was a man often referred to as “the assassin.” He was a special-ops soldier whittling away at the time before his next tour at the poker table. His biggest concern was clearly not the money in front of him, but whether or not he would be able to find a life-insurer who would sell him a policy. We got to talking as a table about the pros and cons of the uncapped game. Given the stacks at this $2/$5 game, it was clear that everyone was more than partial to the possibilities brought on by an uncapped game. Playing devil’s advocate, I mentioned that the cap can often serve to make players more comfortable sitting down in a game. There might be more than one $2/$5 game in this very room, in fact, if there was a $500 or $1,000 cap. The assassin, a few Crown Royals in, made short work of this theory. “As far as I’m concerned,” he began, “poker is supposed to be a bunch of rich guys from Texas with guns sitting around a table smoking, drinking, and gambling for as much money as they have to their name.” For mostly positive reasons, the game of poker does not much resemble this ideal. Still, I found it very humbling to embrace this nostalgia for the poker of old that neither myself nor the assassin had ever experienced or would likely ever experience.

I saw a PLO list, but you will very likely be playing Hold’em at the Beau Rivage. Also, on Friday and Saturday night there was only one $2/$5 game running at any given time.

If you like being able to put as much money on the table as you can, this is the casino for you. The ease of deep-stacked play makes the games more fun and more profitable. The $2/$5 game is far from the softest around, but when the fish can put down as much on the table as they’d like, the possibilities are tantalizing.

I’m biased here, but playing two nights at the Beau Rivage was the closest feeling to a home game that I had felt on the entire trip. By my second night, people were greeting me by name asking about my day at the New Orleans jazz-fest. I met a bunch of cool people that I could never encounter in any other circumstance.

Service at the Beau Rivage was excellent. Both nights I was there I could not find my M-Life card and a chip-runner happily waited in line for me at the membership desk. Also, the dealers here are hilarious. They are extremely sassy and elevate the mood of the game.

Getting in and out of the Beau Rivage was extremely easy. It’s really a gorgeous site seeing all of these casino-hotels coming over the bridge from the mainland with the Gulf of Mexico as the backdrop. The interior is similarly stunning. The only issues for me are that much of the casino allows for smoking and that there is an extremely loud dance bar right next to the poker room.

If you are a poker player and you have never played in the South, make a trip to Biloxi and play at the Beau Rivage. It’s like going to Vegas with half the number of drunk people and twice the amount of beachfront, a worthy trade-off. 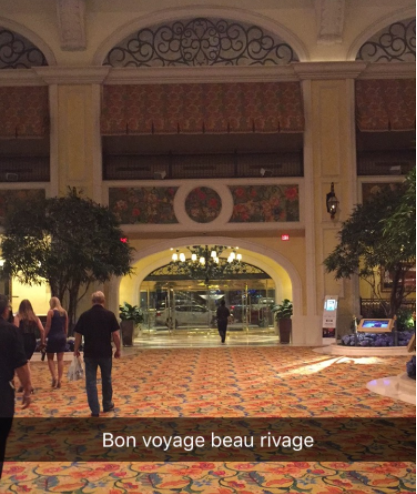