This is the third installment of The Great American Poker Trip series. As those of you who’ve read previous installments now know, my Just Hands Poker Podcast co-host (and fellow Cardplayer Lifestyle contributor) Zach Resnick and I are traveling around the U.S. and visiting a number of poker rooms along the way. I’ve been documenting the highlights here as well as my thoughts about poker culture in different regions of the country. In our previous installment, we visited bestbet Jacksonville. This time around, it’s time to take a look at the poker scene in South Florida.

When I first played in Florida about a year ago, I expected to be spending most of my time at the Seminole Hard Rock in Hollywood, FL. Then, I discovered the Palm Beach Kennel Club. Now, I’m a man who appreciates a bit of luxury. Elegant decorations, plush chairs, high-end waters; I’m not immune to the allures of the “good life”. So take it as evidence of an excellent poker room that I’ve opted on many occasions to spend time at a dog track rather than a casino-resort (which is also great in it’s own right). 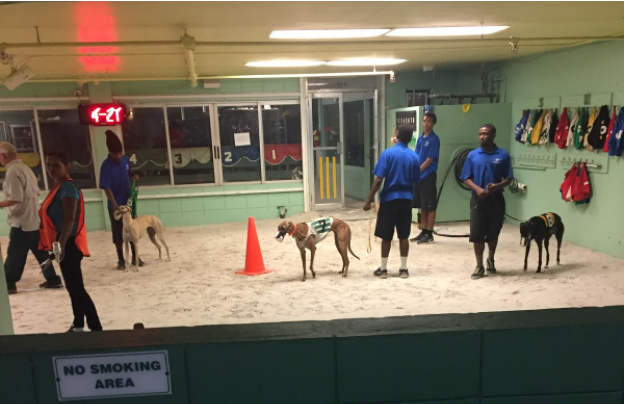 Just outside the poker room at the Palm Beach Kennel Club

What the PBKC lacks in grandeur it makes up for in excess with the action. This room is packed from open to close (I’ve experienced both ends) with an excellent selection of games. While the player pool is extremely diverse in all non-gender categories, they are unified in an extremely relaxed attitude towards poker and life. This disposition is magnified when someone at the table is tilted. Very often, one player can ruin the vibe of the whole table, but at the PBKC, the contrast of one player being unhappy just accentuates what a great time everyone else is having. Very often the tilted one is an older retired gentleman for whom sympathy is hard to come by.

South Florida can sometimes feel like a different country. Hanging around Miami, you’ll hear a different language at every corner. The mixed cultural heritage of the region along with the tourist factor promotes a truly metropolitan feel. All that being said, there are many unifying factors among the otherwise diverse PBCK clientele. Most of these, predictably, are South Florida stereotypes. For one, everyone seems to be in some stage of retirement, regardless of age. This is often true playing a game that attracts all sorts of hustler-types, those who love money but also have a lot of free time. In most rooms, the major exception to this tends to be the pros who often project a strong “I’m at work” vibe.

At the PBKC, the pros are hard to spot based both on their play and demeanor. The players who are clearly pros still fit the mold of the room and are embraced by the rest of the player pool to an unusually high degree. Another unifying quality is the “chill factor”. Both dress and approach to poker are very casual. The atmosphere at the $5/$10 game which got off only once in four sessions was an excellent encapsulation of this mood. 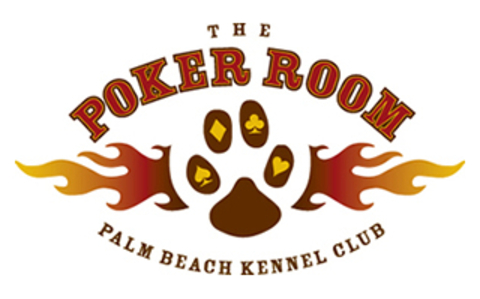 Zach and I sat down with seven other guys who were clearly happy to be back together again. We quickly agreed to do “time-flop”, a credit card roulette-type system where one player is stuck paying the whole table’s rake for the half-hour. Typically the desire to gamble on the rake correlates with a good game. This was no exception. The table talk was constant, especially among the players involved in the hand, the majority of which was needling about both play and appearance. One such comment was handed to a muscular gentleman whose physique and poker-aggression were both praised by the assertion that “your steroids are clearly working”.

The out-of-towners were not left out of the fun either. A concerned player inquired about when my mom would be picking me up before ordering me an ice-cream sandwich. Not wanting to leave anyone out, he ended up ordering all of the remaining ice-cream sandwiches for the table, most of which he consumed himself. Unsurprisingly, no one uttered a word about work the next day.

At the PBKC, you are either in a good game or a great game. The room is very rec-player heavy and due to the shortage of higher-stakes games, the pros are not elite. Couple that with the atmosphere of the room and you have the recipe for a good time.

People at the PBKC are there to have fun. Unfortunately, that just isn’t the case for many people in a lot of poker rooms  around the country, thus making the PBKC a uniquely enjoyable place to play poker.

If you play poker for the comps, the PBKC is not the room for you. While this is a no-frills poker room, the service is generally good and the games are well-run.

While the PBKC definitely feels very safe, it has an aura of degeneracy to be expected at a dog track. It’s not a place for those who can’t tolerate a bit of animal cruelty. That being said, the dog races are sort of amazing to watch and can be seen from the poker room. I’ve never seen any part of the facility other than the poker room that you can enter directly. The actual room has a cozy feel. Everything is clean and in good shape.

For any casual to semi-serious poker player heading to South Florida, the PBKC is a must. The action is great, the people will make you smile, and if the poker doesn’t go well, you can always bink a dog race. 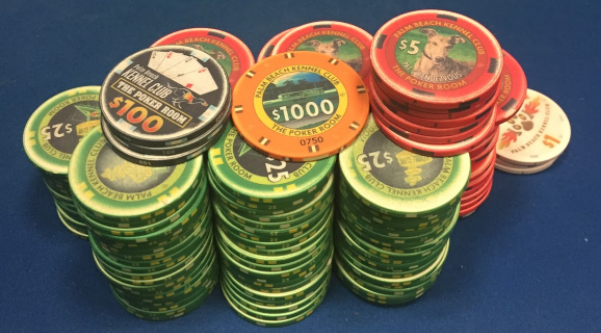 They should put animals on more chips.

Poker action goes around the clock in South Florida, but all hours were not created equally among the various venues. For the day-shifters, the Isle Casino has the best poker game in town. Just be ready for an old-school experience. Walking up to the place already feels a little like stepping into a 70s hustler movie.

Corroborating the easily disprovable fact that the Isle has not been updated since the 70s are the chips. Those boys are seriously scuffed, and the picture below lacks the most extreme case. The black $100 chips seriously look the same as the white $1 chips. I asked a few of the regs about it and they pointed out that the black chips had to be bleached at some point, as if this was a very natural reason for having grey white and black chips (for what it’s worth, they were unable to provide as sanitary a reason for the extreme greyness of the white chips). 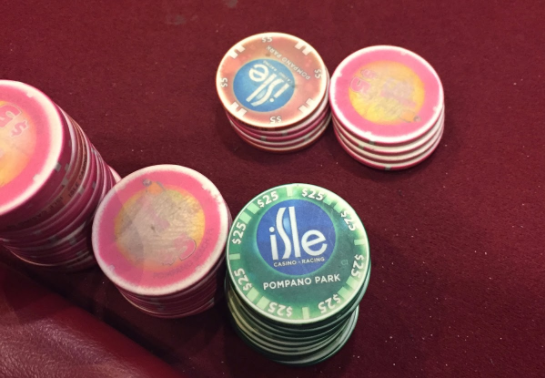 Jokes aside, the Isle is the home of some serious action. I never made it before 1 PM, but they must be giving away breakfast, as the place is full by 10 AM. If you’ve made any assumptions about the demographics, you might expect half the tables at that time to be $4/$8 limit. Not so fast! Almost all of the action is no-limit other than a $100/$200 mixed-game, which looks pretty epic. 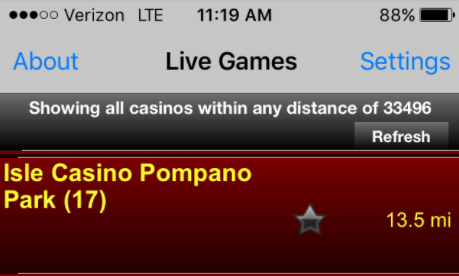 The diversity among the Isle Casino poker players lies mostly in their tri-state area neighborhood of origin. Other details are slightly more predictable. It really is an odd experience sitting down in a $2/$5 game as the only player within 40 years of 21. Unlike many of my other experiences with this age group, I was not asked about my career plans or for help with an iPhone. In fact, there seemed to be a sincere attempt to ignore me and what I represent, a greedy interruption to a friendly game. I understand the sentiment and am happy to tolerate a little coldness for a seat in such a soft game. Truthfully, my presence really is a disturbance. Throwing a player like myself into a limp-happy small pot oriented game makes playing almost every hand, a favorite strategy amongst much of this player pool, much more expensive.

For NLH players at the $5/$10 stake and below, the Isle will have your game spread during most hours of the day. PLO action was limited, but there were a few daily tournaments that were always well attended. The $2/$5 game has a $500 cap and plays fairly small. The number of tables and the ability to table select is a big plus for the $2/$5 games.

There are some good pros in the $5/$10 game, but they opt to play $100/$200 mixed when it runs. As long as that game is going, the rest of the room is easy pickings. Most players are fit-or-fold types and are unlikely to run a bluff of any significance. It’s not a super gambly game, which caps the upside a little, but you really can’t beat the action here until around 5 PM.

This very mild-mannered room would start to really bore me if I were grinding $2/$5 for too long. The $5/$10 game boasts a much friendlier and smaller player pool that is more accustomed to having young poker-pro types. Still, as a millennial, this is the last place I’d go in Florida if I had aims to meet someone to hang out with outside of poker.

The service was excellent and the table-side food was affordable and delicious. Of course, the coffee was next to undrinkable, but that’s just the nature of a poker room, unfortunately.

The outdoor parking is a drag late at night or on a particularly hot Florida day, but everything else about the facility is solid. The one exceptional thing about the poker room specifically is a huge wall with two clusters of four large TV screens airing exclusively sports. Unlike most poker rooms, which are full of TVs at terrible angles or distances for viewing, the Isle actually facilitates watching the game, at least for one side of the table. 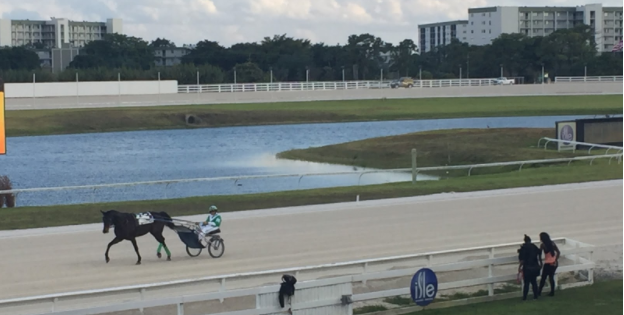 If you want to get in on the South Florida action and the Miami nightlife in the same day, checking out the early shift at the Isle Casino Pompano Park might be your move. In addition to some excellent poker, you’ll probably get some tax advice and hear a war story or two. Fine way to spend an afternoon, if you ask me.