All aboard for the fourth installment of the Great American Poker Trip. For those of you just joining us on this leg of the trip, my name is Jack Laskey and I’m a co-host of the Just Hands Poker Podcast. My co-host (and fellow Cardplayer Lifestyle contributor) Zach Resnick and I have seized upon a great lack of other opportunity to take a road trip across America playing poker and seeing the country. Here, I am documenting highlights from the trip and exploring the microcosms of poker culture I’ve experienced throughout my journey. Last week we were in South Florida, and now we are in  the state capital of Tallahassee.

The aforementioned lack of opportunity was put on hold for this part of the trip. Zach had to fly back to NYC for a conference and I was tasked with getting the car to New Orleans where we’d meet a few days later. Not wanting to do too much driving or too little poker playing on any given day, I devised a four-day itinerary. I’d spend a night each in Tampa and Tallahassee and two nights in Biloxi, MS, a road-tripper’s stone’s throw from New Orleans.

After a forgettable night playing in a terrible $5/$10 game in Tampa, I set out for Tallahassee. I arrived at my hotel on the late side and almost decided not to play that night. The thought of this very article, however, motivated me to get back out of my hotel room and head west 25 miles to the Creek Entertainment Gretna (CEG). The CEG is not on Bravo Poker Live, the essential poker app that tells players what games are currently happening, how many tables are running, and the length of the wait lists at live poker rooms around the world. Driving through the pitch-black Florida panhandle without the assurance of the Bravo app, I was sincerely concerned that I would arrive to find there would be no game, or worse, a single $4/$8 limit table.

My fears were alleviated not when I took the exit or headed up the long driveway, but when I actually arrived in a somewhat full parking lot. The CEG almost has the look of a renovated plantation home, the truth of which which is far from out of the question. Increasingly self-conscious about my New York plates, I took a back-row spot and made my way inside.

The Creek Entertainment Gretna is a seriously bare-bones establishment. Like the Palm Beach Kennel Club, the room offers poker, poker-related table games, and has a separate room for betting on horses and dogs. I made my way past the Ultimate Texas Hold’em tables and up to the front desk to figure out what to play. Notably absent from the establishment were slot machines, and other typical casino game fare like roulette, blackjack, etc. In other words, people come to CEG to play cards and place bets on animals, not for free spins and the like.

There was a list for $1/$2 NLH and open seating for $1/$2 PLO with a $5 bring-in. I asked if they ever ran $2/$5 and was promptly told that there hadn’t been a $2/$5 game in over three years. While my doubts at the truth of this statement were heightened by the aggressive head-shake by the floorman standing a few feet behind the woman at the front desk, I nevertheless accepted the seat in the PLO game, which at least had a $500 cap.

While I had been South of the Mason-Dixon line for a couple of weeks at this point, it wasn’t until sitting at this PLO table at the CEG that I truly felt like I was in the South. I got seated next to an older gentleman who looked strikingly familiar. He had sort of a beardless Jack Sparrow look that, when coupled with his intense familiarity, made me consider the possibility that he was some sort of character actor, although there were certainly factors competing against that hypothesis. A few minutes into our session, I quietly mentioned to him that I suspected we had played together before. The accent that emerged in his response totally shook my foundation. I was almost transported to a recent trip to Scotland, another place where you know English is being spoken but it takes intense focus to pay attention to what is being communicated rather than just enjoy the sound of the accent.

He told me that he was living out in Vegas for a while before moving back to Florida and, if we had played together before, that was probably the venue. I told him a bit about my trip and he made what I found to be a somewhat disturbing comparison between the two of us. He, too, was spending most of his time traveling around playing cards, unburdened by things like a wife or a family. While the shared drifter-gambler quality was currently fitting and promoted a sense of kinship, it certainly brought on the twinge of a dark omen, a look at one seemingly gloomy future among all of the possible outcomes of my life.

This sobering augury aside, the game was fantastic. There were four tables running in the room. Two PLO tables, one NLH table, and a Pai Gow table. A core of players were actually participating in PLO and Pai Gow concurrently. Overall, the same types of players existed in this small cardroom west of Tallahassee that exist in most poker games across the country. You had clear-cut all-American fish, savvier gamblers who just have too little discipline to win, young aspiring professionals who are still refining their live poker fundamentals, and your mid-thirties grinder types who act like pros but don’t always play like it. The differences were mostly aesthetic. With slightly different wardrobe choices and Midwestern accents, this could easily be a PLO game in Cleveland. 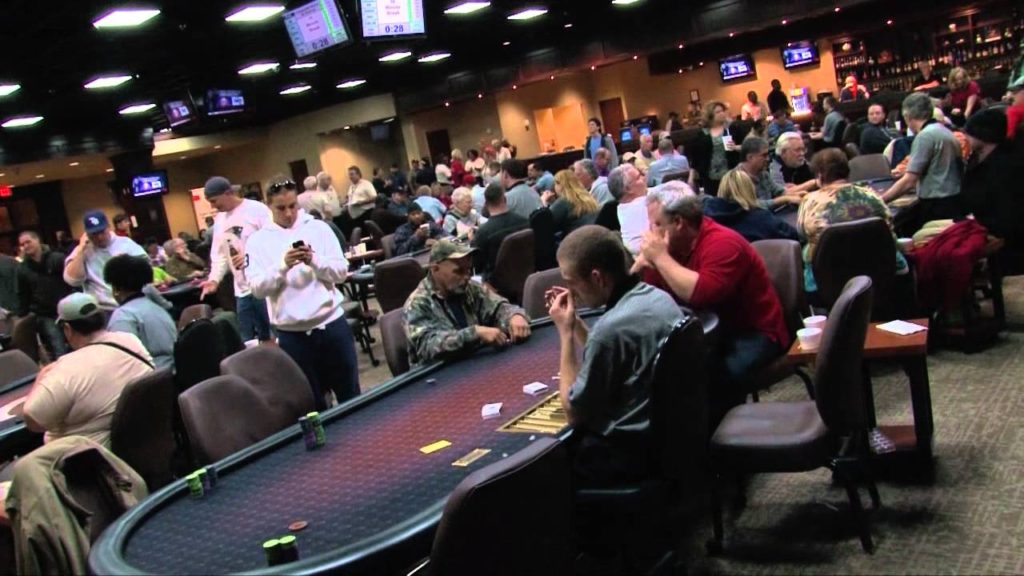 Eventually the NLH table broke and my must-move PLO game got short-handed. After an hour or so of 4- or 5- handed play, all but one other player left. It was about 2:30 AM at this point and the place closed at 4:30 AM. I wanted to stay to play in what looked like a fantastic main game, but I noticed that no one had left the game for a couple of hours at this point. I asked the other remaining player if he thought a seat would open before the room closed. Absolutely not, he told me, before heading over the the Pai Gow table.

From looking around the room, it seemed like the only game worth playing was $1/$2/$5 PLO. That being said, the structure of the game was perfect and there were two tables running most of the night.

Live PLO games tend to range from good to fantastic. The true gamblers tend to have a hard time going back from PLO to NLH, which does wonders for the overall game quality. The main reason for this is the illusion of possibility that comes with a PLO hand. Almost any experienced NLH player realizes that J7o is a bad hand. On the other hand, KcQd4s5s, a very bad PLO hand, is just a lot sexier. The ability to regularly build a $200+ pot pre-flop against people playing terrible holdings makes for a very profitable – if not highly swingy – game. The action at the CEG was no exception. There were just enough fish at all times to keep pots large, free of redraws, and full of second-best hands.

Admittedly my sample was extremely small, but my table was generally friendly and kept a conversation going outside of the shorthanded periods. PLO tends to have more constant action than NLH, so the table tends to pay a lot more attention to what is happening in pots, particularly since people probably see twice as many flops on average. For that reason, table talk tends to be more limited in a PLO game and often revolves around the action. This made the presence of friendly non-poker chat unique.

The service at Creek Entertainment Gretna definitely left a better taste in your mouth than the water. Like the Palm Beach Kennel Club, there was no rewards program. Soft drinks and such were still free, which was more than can be said about the poker room I visited in Tampa.

The CEG is truly in the middle of nowhere. It’s very much a locals card room. There are (to the best of my researching abilities) no hotels within 15 miles of the place.

My experience with the interior was skewed by a recent carpet cleaning that left the whole room damp and musty. I learned of the carpet cleaning by mentioning the mustiness, which triggered a hilarious mixture of vehement agreement and fierce prideful denial. Regardless of the lasting ability of the odor, the room could use some work.

If you find yourself cruising down I-10 in West Florida with a hankering for Omaha, head just north at exit 174 for the Creek Entertainment Gretna. While the CEG is certainly not a place you are likely to stumble upon or make the destination of a poker trip, it is a shining example of the game of poker thriving on a local level in the USA.