Well how about that? We actually made it to double digits!

Humble beginnings, indeed, and I couldn’t be more filled with pride and gratitude to look back and see how far Cardplayer Lifestyle has come in 10 years. Throughout most of this poker media site’s existence, I’ve published an annual anniversary post that reflects on the years prior, which de facto sort of acts as a “State of the Union address.” This year, since it’s a special anniversary, I thought I’d do something a little different.

Poker players almost universally love numbers and graphs. Though numbers and graphs are of course not the only barometers of success I have for Cardplayer Lifestyle, they certainly tell an interesting story when you take a look at the year-by-year progress.

As the old adage goes, Rome wasn’t built in a day. So, too, as much content as we’ve got on this site, it’s all been a matter of steady, consistent building.

I’ve included the last month of 2009 in 2010’s (aggregate) numbers and 2019’s numbers are obviously only reflective up until and including today’s publish date.

That comes to a total of 1,227. That’s 1,227 times I clicked Publish; 1,227 articles I’ve shared over the years via social media; 1,227 pieces of content we’ve released in the hopes of providing you all with interesting, entertaining poker stories, offers, strategy pieces, interviews, op-eds, and more.

Our best month on record was May 2019, in which we recorded a whopping 21,294 visits. I remember the feeling I had seeing that number for the first time and it was so incredible that I felt compelled to write a dedicated article to document the occasion.

READ MORE: How I Grew My Poker Media Website from 0 to 20,000 Visitors Per Month

All in all, when you add the above numbers together, it comes to a total of 671,176 visits to CardplayerLifestyle.com. That’s close to 700,000 times someone found something we published interesting enough to click and spend some time reading. With attention being (in my opinion) the world’s most valuable currency, I can’t help but be honored and humbled by the fact that so many people have given us that much attention over the last decade. Thank you!

Our Most Popular Articles

The poker world has gone through numerous developments, plenty of ups and downs, and an inestimable number of news cycles over the last decade. It’s pretty cool to look back and realize “hey, we were around when that happened!” I’ve gone back through the archives and analytics to find which our the articles we published was the most popular each year. The results brought back some great memories for me, and I imagine longtime fans will feel similarly seeing some of the titles below. To an extent, the list of our most popular articles of each year also offers intriguing window into poker’s recent past, and what’s gotten people buzzing the most.

Interestingly, it’s one piece of content that doesn’t appear on the list above, which ended up tops for our most popular article of all time. In testament to its enduring and evergreen message, I’m very proud that since its publication many years ago (in January 2012) and up until this very day, people are still finding our guide for How to Run a Successful Charity Poker Event worthy of reading and learning from.

In terms of the immediate future, it’s getting to be the time where I try to put together a list of goals for the coming year. On the one hand, continuing to “just keep doing what I’ve been doing” would be an understandable modus operandi; after all, that’s what’s gotten Cardplayer Lifestyle to this point. On the other hand, precisely one of those things I’ve done in recent years is set goals. Doing so has always had net positive results, and it’s important to be actively aiming to do better, achieve bigger things, and be committed to further growth.

For instance, I know that nobody out there keeps track of what we do here at Cardplayer Lifestyle as closely as I do. That’s one of the many reasons I compile a monthly newsletter, namely to keep people in the loop. That said, there’s an average of 15,000+ people visiting this site each month, but only 1,000 or so newsletter subscribers, so one of my goals for 2020 will be to close that gap (click here to subscribe). Besides recaps of our monthly activity, we also often reveal exclusive offers and giveaways in the newsletter, as well as give subscribers the first peek at other great planned poker content we’re working on. It’s FREE to sign up, so you can only gain from doing so, and I’m sure you won’t regret it.

As for the more distant future, I can’t help but crack a smile wondering what Cardplayer Lifestyle’s 20th anniversary blog post will look like. For a poker blog that started on a lark, making it to 10 years (let alone 1 year) seemed like a pipe dream. From where I stand now though, two decades of doing this poker media thing seems utterly achievable and it’s a milestone I’m 100% enthusiastic about pursuing. Together, we’ll make it. Thanks, as always, for your support! 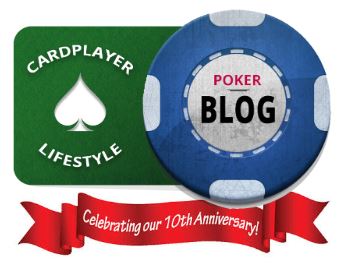