How I Grew My Poker Media Website from 0 to 20,000 Visitors Per Month

“An overnight success that took almost a decade to happen.”

That’s how I describe Cardplayer Lifestyle to people after they react when I say that this poker media website has 20,000 visitors per month.

Of course, it wasn’t always this way… 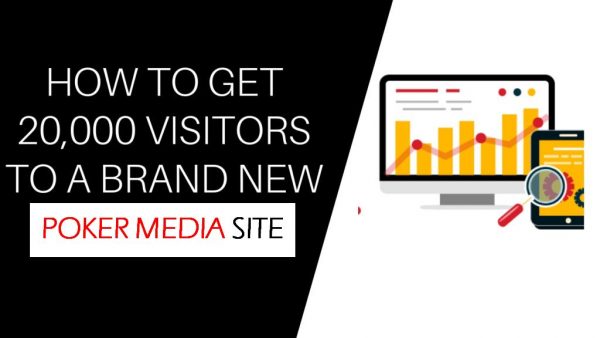 Back in late 2009 and early 2010, when this site went live, I used to obsess about the statistics. “We got a dozen, honey! 12 people checked out my article today!” I used to exclaim to my wife. It was genuinely exciting. She laughed, of course.

That a couple hundred people each month cared enough (or mistakenly typed in the wrong URL enough) to see what Cardplayer Lifestyle was all about was pretty cool. Hell, I didn’t even know what Cardplayer Lifestyle was supposed to be about back then! All I knew was that I loved poker, loved to follow poker, knew how to write, and felt fulfillment after writing an article about poker. (We didn’t call it “creating content” back then…)

Traffic during our first full year online. August was the high point…

I didn’t even know how to publish articles yet! I didn’t know how to add images, insert links, embed social media posts; nothing. I would write up the article in Microsoft Word and send the document via email to my good friend Avi Buchbinder, who co-founded the site with me. He would then publish the article, notify me, and I would sit and wait for everyone to read it and start telling me how amazing the article was.

And I would keep waiting. And waiting some more. After a week or two of waiting I’d figure “hey, I probably ought to write something else… maybe THAT people will read?”

Why weren’t my few dozen Twitter followers (most of whom were my real-life friends) all retweeting the article? Didn’t my couple hundred Facebook friends think my recap of High Stakes Poker Season 6 Episode 4 was the best thing they’d ever read?!

I obviously had a lot to learn. 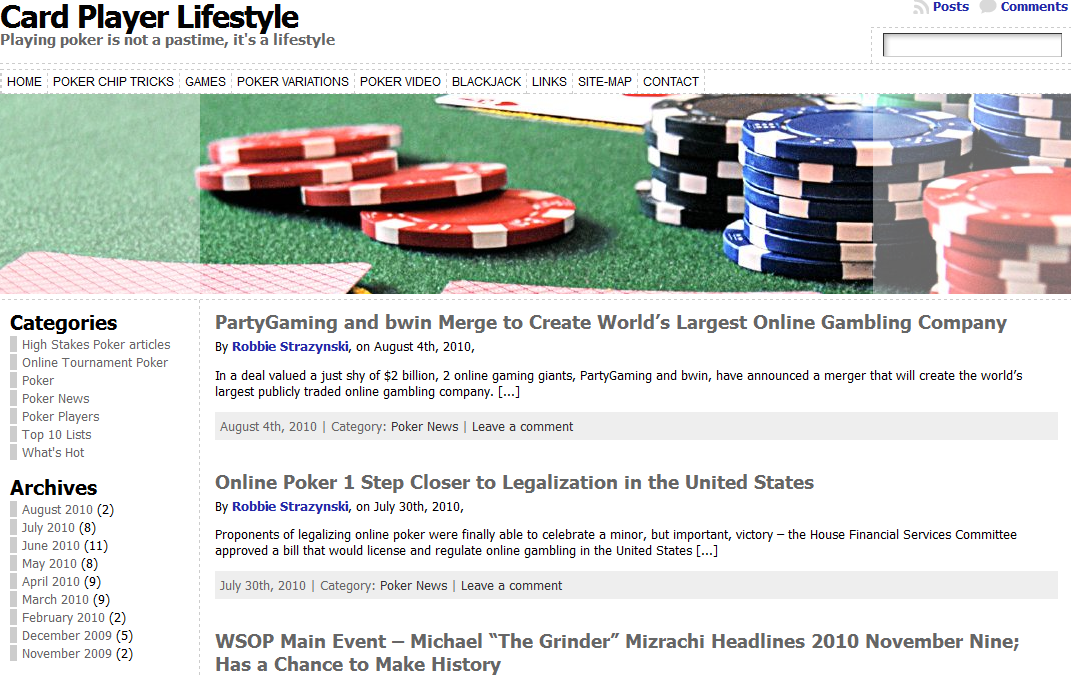 A bit embarrasing, but yup – this is what Cardplayer Lifestyle used to look like when we first started out

I Find My Voice and My Stride; I Become a Webmaster

During the first couple years of Cardplayer Lifestyle’s existence, I spent truckloads of time trying to figure things out. I must’ve asked Avi thousands of questions about WordPress, Google Analytics, and how to do all the things he did, which I later learned was called “webmastering.”

I didn’t (and still don’t) have any sort of budget for paid promotion of the content I published, but I had time — or, rather, I chose to have time rather than to sleep…. So, quite literally for years, I have dedicated time and effort to learning more about what it takes to run a successful website and keep an audience coming back for more. The results of all this learning have slowly but surely manifested themselves in my:

Cardplayer Lifestyle will soon undergo a total design overhaul – our brand new site will make you stand up & applaud … well, we hope 🙂

To this day I continue learning about the ever-evolving field of SEO, and while I have a much better than average understanding of it, I know I’m no professional. To that end, I’m grateful to have been able to call upon some wonderful people for assistance. Take Mike Johnson, for instance. I’m friendly with many SEO professionals who’ve all helped me when I’ve been in a pinch, but Mike aided me in resolving a number of persistent back-end issues that had long been plaguing this site, enabling Cardplayer Lifestyle’s search engine presence to finally break through to the next level.

When social media accounts for over two-thirds of your visitors and only about 20% of people who visit your website discover it via Google search, either there’s something you’re not doing, you’re doing something wrong, or something’s broken. Thanks to Mike’s help, all three of those issues are but distant memories.

What a thrill to fixing over 1,500 broken links on my website within 1 hour! What a shame I wasn’t aware of them for over 3 years though…

Beyond all the technical stuff, I also came to understand the audience I was writing for. You guys! I started to find my voice as a writer. After some ludicrously unsuccessful attempts, I realized that I shouldn’t be trying to compete with other poker media sites, but rather to “find my own way” and develop a different kind of niche.

All of this personal and virtual development happened on nights and weekends, while I toiled away at a regular 9 to 5 (more like 8 to 5 plus two or three hours of commuting) job.

Rome Wasn’t Built in a Day, or By One Person

Traffic spikes are a beautiful thing; music to a webmaster’s ears. A few years ago, getting a retweet from one of poker’s “Big Four” (Phil Hellmuth, Daniel Negreanu, Phil Ivey, and Doyle Brunson) meant a very significant surge in web traffic (it’s still pretty awesome; just not as “impactful” as it used to be traffic-wise). I vividly remember back in May 2013 getting a notification to my phone that Phil Hellmuth had retweeted my article about his then-13 bracelets and 13 people he follows on Twitter. It had been two weeks since I had published the article and I had all but given up hope that Phil would see it, then somehow it (finally?) got his attention and he deemed it worthy of sharing.

Speaking of getting Phil’s attention, at the time I’d never have dreamed of THIS happening 6 years later…

That beyond surreal moment when @phil_hellmuth sees you in the Rio hallways and comes up to you to say he “noticed you played in your first bracelet event… that was really cool; I’m happy for you.”

Such an incredibly touching gesture, sir. I will never forget it. 🙏#classact

Anyhow, I rushed to the nearest computer to see the numbers indicating that HUNDREDS of people were simultaneously reading the article. The spike remains one of the biggest in the history of this website. 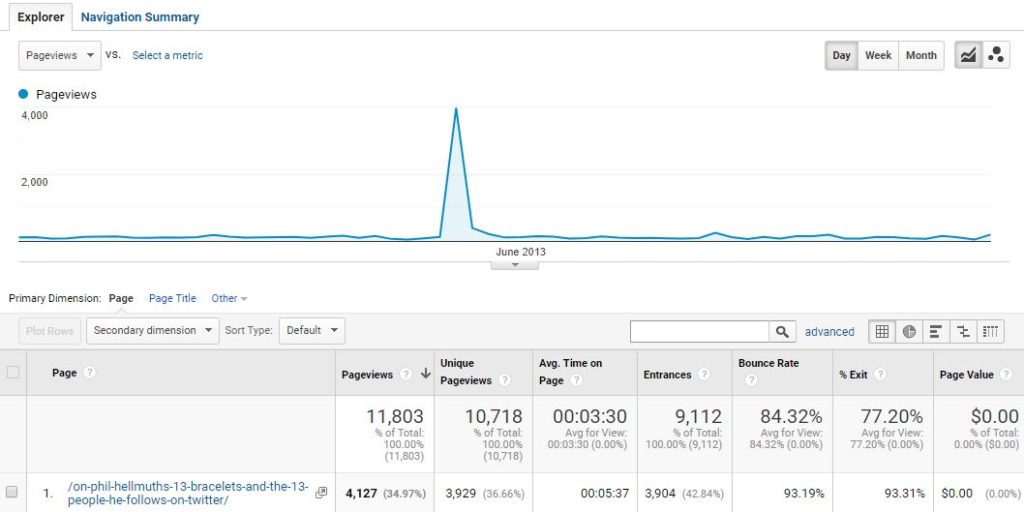 What happens when Phil Hellmuth notices you for the first time…

But as you see by the rest of the graph, spikes don’t really last. Much like an online poker player’s graph, spikes (tournament wins) are wonderful, but they’ve got to eventually take you to the next level where you see a consistent rise. I’m grateful that, ever so slowly, that has happened.

Just as I’ve gotten a lot of help over the years from SEOs, graphic designers, and front end developers, I of course can’t claim to be responsible for all of the content you’ve read on these webpages over the years. While the large majority of it was penned by my keystrokes, a very significant amount was authored by contributing writers.

By mid-2014, quite frankly I had reached my output limit in the available time I had. When starting to more regularly publish articles written by others, I quickly realized the myriad benefits. I wasn’t handing over my baby to someone else. I was merely switching my “writer” hat with my “editor” hat. More voices means the potential to appeal to a broader poker-loving audience. It’s been a real thrill to give dozens of other writers a platform via which to share their views and talents. By the same token, it’s just as thrilling to have watched the tide of visitors continuously swell higher in tandem with the increased content output we’ve collectively been able to generate.

By early 2017, the proverbial dam was beginning to break and I knew that to tap into Cardplayer Lifestyle’s full potential to succeed, I needed to devote my full attention to it. No longer limited to nights and weekends, pushing full throttle with this website has led not only to increasingly significant traffic milestones, but also an increased speed at which those milestones keep getting reached. Watching the traffic graph rise ever higher each month has been and continues to be incredibly fulfilling.

It’s hard to fully capture all the emotions I’ve felt while writing this blog post. I’ve written close to 1,000 articles over the years and have edited so many hundreds more from my amazing contributing writers. So many thousands of hours dedicated to pecking away at the keyboard, tending to my bonsai plant with the love of a devoted parent. When you’ve spent a decade building something, you can’t help but reflect upon your work with immense pride:

I did that. Sure, I had TONS of help and plenty of good fortune along the way, but THAT graph right there exists overwhelmingly because of the sustained effort I’ve put forth.

I also can’t help but laugh a little: “A DOZEN! Honey, a dozen people checked out Cardplayer Lifestyle today!”

How new to the world of webmastering I was. How naïve to the world of social media. How blind to and out of touch with the poker community. Yet those dozen people meant the world to me back then.

While it takes far more than 12 people visiting this site in a single day to get me as excited nowadays, I’m so happy that my enthusiasm for this endeavor hasn’t worn thin. If anything, it has grown by leaps and bounds, and I legitimately still do care about each and every single visitor to this website. I am honored and flattered that you’ve taken that many minutes out of your life each day to see what’s new at Cardplayer Lifestyle.

If on November 29, 2009 someone had told me Cardplayer Lifestyle would still be around 9 years later, I wouldn’t believe them.

Getting to spend every waking moment doing what I love is the biggest blessing.#gratitude #grabbingatissue pic.twitter.com/QPFQjYLU84

The world of 2019 is similar to, but quite different from, the world of 2009. With each passing day it becomes that much harder to capture an audience. It’s an era overflowing with amazing content of every imaginable variety, all competing for the world’s most valuable currency: your attention.

Wouldn’t that be something?

Whenever that day ends up coming, the landscape with once again likely be different than it is now. I’ll know that much more about webmastering, have that much greater of a social media presence, and be that much more ensconced within the poker community. Hell, I might even have a budget available for a full-time SEO professional, graphic designer, and Web developer to start really taking this poker media site into the stratosphere! A guy can dream, right?

What I can guarantee won’t change, however, is my enduring gratitude and appreciation for each and every single one of you website visitors.

And there you have it, folks. That’s how you put together a (what you hope will be successful) article in a single afternoon. It just takes about 10 years of effort.

Thanks, guys. For everything.