Disclosure: Please note that post contains affiliate links and I will be compensated if you make a purchase after clicking on them.

I had a totally different plan for how I was going to spend my day, but upon discovering that MasterClass had just debuted a brand new Poker Strategy Course by Phil Ivey — that’s right PHIL IVEY! — I dropped what I was doing and spent the next few hours devouring his course (and producing this review).

When Phil Ivey, arguably the greatest player in the history of poker, comes out with a MasterClass, you pay attention! 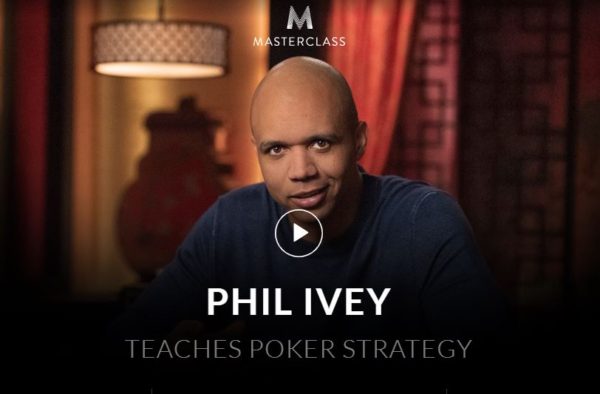 Unlike dedicated Poker Training Sites produced by other outlets, this course utilizes the built-in MasterClass price structure: $90 for the single class, or $180 for an All-Access pass to every single MasterClass course (there’s nearly five dozen of them as of this publication). 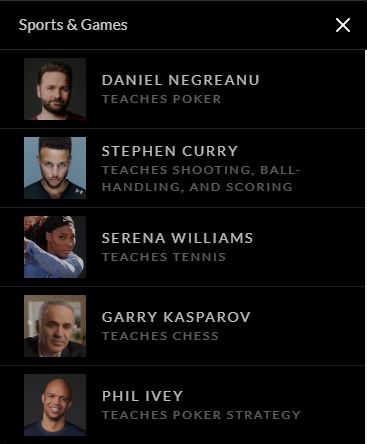 After more than two decades in the poker limelight, Ivey to this day remains a Michael Jordan-like, albeit somewhat enigmatic figure. His public appearances outside of poker events are exceedingly limited, and even within the poker world, as he typically plays in high stakes cash games in Asia, he’s rarely seen stateside outside of the World Series of Poker or, more recently, the PokerGO Studio.

A couple verbal clues give away that filming of the course was done late last year. At one point during a lesson Ivey reflects that “I think I played a hand this year at the World Series” (clearly referring to 2018). Moreover, towards the end of the course he says “I’m 41” (he turned 42 in February). Obviously it takes quite a while to do post-production editing of a course of this caliber, but I’m positive that Phil and the folks at MasterClass knew exactly what they were doing, waiting to release the course just ahead of the 2019 World Series of Poker.

Poker players’ excitement is at a fever pitch right now. Not everyone has the desire to read through a list 50 Tips for the 50th Annual WSOP, but who wouldn’t relish the chance to absorb some great strategy and tips from one of the game’s true legends just ahead of what’s sure to be a red hot poker summer?

As such, the announcement of this new course is nothing short of AMAZING. The opportunity to watch Phil teach (as well as share a few delightful short personal stories from his time at the felt) for three hours is alone is worth the asking price as a poker fan. Throw in the first-rate production quality always associated with MasterClass, and I’m wondering why you haven’t already made your course purchase?!

Phil Ivey’s MasterClass is comprised of 11 lessons, broken down as follows:

Those with a more discerning eye might glance at the course’s first and last “lessons” and feel it’s actually just nine lessons bookended with an introduction and conclusion. While there’s a little bit of truth to that, I can say with confidence that there are still insights to be gained from both Lessons 1 and 11, respectively.

Moreover, many might be wondering what target audience this course is aimed at.

Negreanu has one as well. I just wonder, will these be catered exclusively to pros, or will noobs get something out of the classes?

I certainly don’t feel that this is a course that world class players can learn too much from. That’s not who it’s designed for. The material covers No Limit Texas Hold’em exclusively, along with general poker tips and strategies. That said, the game’s elite might perhaps be able to learn a little bit about Phil himself and use their inferences next time they face off against him at the felt.

When Phil was still in his late 30s, he took an active role in a brief media push to promote (his now defunct) Ivey Poker and Ivey League ventures. At the time, I was granted a rare Ivey interview during which, among many other questions, I asked him what his goals were.

He responded that “I’m working on my legacy, now. Poker has been very good to me, it’s been through some ups and downs, and I want to help build the industry and help the world understand why I say that poker is the greatest of all games.”

True to form, those sentiments were echoed right from the get-go of Lesson 1 of his MasterClass:

I’m happy to give this because I think poker deserves it… The game has given me so much, an amazing life… this was an incredible opportunity for me to give a little back to the game and help some of the players coming up.”

Longtime poker fans have surely heard the legendary stories of Ivey’s start in poker as “no home Jerome”, sleeping under the bridge in Atlantic City, but it’s another thing entirely to actually see and hear Phil himself relate that story on video. Moreover, it’s genuinely humbling and inspiring to hear an Ivey in his early forties discuss his beginnings, playing $1-$3 7 Card Stud in Atlantic City (as an underage minor).

While the Phil Ivey mystique will continue to live on, the emergence of this MasterCass makes him that much more relatable to the masses. Moreover just like what Daniel Negreanu does with his MasterClass, as per the company’s modus operandi of having “Office Hours,” it appears as though Ivey will be making himself available to interact with students.

The thought of being taught mental toughness and table image lessons by a poker player with arguably the fiercest mental game and most intimidating table presence is tantalizing, to say the least.

Ivey instructs via letting us all in on his thought process during some of his most famous televised poker hands, such as the “mucked winning flush” at the 2009 WSOP Main Event and “the Paul Jackson hand” from the 2005 Monte Carlo Millions.

Pearls such as “It’s how you play when you’re losing that shows the mark of a champion,” “knowing how to deal with losing should make you stronger,” and “trust your gut/instincts and act on them; usually your gut is right, for me anyway” are quotes from Ivey that can’t help but inspire confidence in students.

I couldn’t help but laugh upon hearing Phil say that “I don’t try to intimidate anyone,” but then nodded appreciatively when he continued by saying “I just play. If they choose to be intimidated, that’s their choice; that’s not my goal. I’m just trying to do the best job I can… I don’t think about creating a table image as I play; that kind of just happens naturally.”

“Intimidation comes from your history… you can’t sit at a table where nobody knows you and try to be intimidating…. Your play needs to speak for itself.”

He got even more laughs out of me relating a funny story about how he used to get needled by Larry Flynt, back when they used to play together often. It’s gems like those that not only guarantee students will smile, but also stay laser focused on deriving insights from Phil’s experience-rich career.

A Look at the Mind of Phil Ivey

One new (to me) idea that I’ll surely integrate into my arsenal of poker tools is something I picked up when Phil took us through a hand he played against Doug Polk in the 2015 Aussie Millions $250,000 Challenge (an event he’s thrice won). Already knowing what action he’d take, Phil decided to tank for a minute or two to gather information about Polk’s body language. My “aha!” moment occurred when Phil said that “The information I was gathering wasn’t for a tell in that moment; it was for the future.”

Beyond equipping themselves with useful poker tools, students hear firsthand who Ivey’s poker inspirations were. Doyle Brunson is perhaps an obvious name that would come to mind, but the names of two other players he mentions might surprise you. Ivey credits them as having taught him numerous lessons not via one-on-one instruction, but rather via having competed against them. A humble Ivey then states that “The only way that you could learn is by playing against people that are better than you.”

He extols the value of speaking with poker peers; finding players who are better at certain aspects of the game, learning from them – and in exchange giving these players some tips on certain things when they ask for help. “Take your ego out of the equation,” he intones.

Here are some additional knowledge bombs Phil drops on us:

While none of those quote are necessarily Earth-shattering, the fact that they came out of the mouth of Ivey himself all but guarantees that players will be scrambling to download a poker note-taking app, become more fastidious about their study and game play, and begin focusing on non-Hold’em poker variants. To point, I don’t know if there will be a concrete way to measure the impact of that last point, but I wouldn’t be surprised if in the coming years we start seeing more crowded fields in mixed game tournaments.

Such is the impact of the greatest the game has seen.

One of the most stories series of poker games ever to take place was “the Corporation vs. Andy Beal” back in the mid-2000s. Accounts of those games have been told and retold by numerous members of the Corporation, but this MasterClass represents the first time (that I’m aware of, at least) that Ivey himself reflects publicly about facing the billionaire banker.

Another “Easter egg” Ivey drops when talking about the success of some of today’s top players is that “a lot of these guys are only playing for 8% of themselves.”

As mentioned at the outset, Phil Ivey’s MasterClass makes him entirely relatable. A very human Phil looks right into the camera lens and opens up about having made a lot of mistakes and bad decisions in his 20s; that he honestly wasn’t ready to handle all the big money he made back then.

As much as I was trying to learn while watching the course, I couldn’t help but fanboy, and I imagine many students will, too. It was just plain awesome to see Phil smile. Perhaps he smiles no more or less than anyone else does, but he’s so rarely on video outside the poker table, where he’s so serious. He’s a good looking guy and carries himself with an aesthetically pleasing presence through the three hours of video footage. I was reminded of how much I enjoyed watching him play on Season 2 of Shark Cage when he got heads up with Negreanu. Smiling, fun Phil Ivey is a GREAT Phil Ivey.

Four years after getting a “bucket list” poker interview with him, I finally got my bucket list photo op. ✔🎉

The course is instructive both for on-felt tips as well as in peeling back the layers of one of the most intriguing and sensational poker personalities the game has ever seen. Acutely self aware, he closes with a message to the kids he may someday father.

His final four words, obviously enhanced by the fact that it’s Phil Ivey saying them directly into the camera, are among the most motivational ones I’ve heard. The perfect culmination to a wonderful course.

I’m pretty sure that a serious recreational poker player like myself represents precisely the target audience Phil Ivey’s MasterClass is aimed at. In my opinion, the course was phenomenal. In an era overflowing with poker content, this is quite literally the rarest breed of them all and it stands out almost by definition.