Out of 6,865 registered poker players, in the end, only 1 person could take home the bracelet. The final three participants in the 2011 World Series of Poker Main Event, Ben Lamb, Pius Heinz, and Martin Staszko, showed up ready to stake their claim the championship. After the stunning elimination of Ben Lamb just about 10 minutes into 3-handed play, an almost 7-hour-long heads-up battle ensued between Staszko and Heinz over the next 120+ hands of poker play. The final hand, in which Heinz emerged victorious, was dealt shortly after midnight local time. 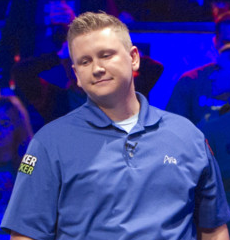 Three-handed play could not have started out more unexpectedly. In the first hand, holding K-J, Lamb decided to make an aggressive 4-bet move, but found himself pot committed against Staszko, who pushed all-in with pocket 7s. The board didn’t improve Lamb’s hand, and, reminiscent of what happened to Joseph Cheong last year, suddenly it was essentially a 2-man game. Holding just 12.7 million in chip ammunition, Lamb shortly found himself on the rail, eliminated by Staszko’s pocket jacks a short 3 hands later.

Lamb, though stunned by the immediacy of his fall from contender to bystander, behaved admirably in his post-elimination interview, saying “Every poker player dreams to have a year like I’ve had, so I’m not going to sit here and have people cry for me… I’ll be okay.” Talk about focusing on the positive! Lamb leaves this year’s WSOP stage with Player of the Year honors as well as a big fat check for just over $4 million.

Heads Up for the Title

Entering heads-up play, Staszko held just over 117 million in chips to Heinz’s 88.6 million. In a seesaw battle that raged over the next 6+ hours, the lead changed hands between the two approximately 10 times. At one point Heinz, the 22-year old from Germany, was outchipping Staszko, the 35-year old Czech Republic native, by a more than 2:1 margin. Staszko then turned things around to dominate the next couple hours of play, eventually climbing to a 3:1 chip lead.

The tide eventually turned once again in Heinz’s favor, as he was able to double up when Staszko missed a flush draw that would have ended it. In the final hand, Staszko open shoved for his last 40 million or so and found his 10-7 suited clubs dominated by Heinz’s A-K offsuit. The board ran a dry 5c, 2d, 9s, Jh, 4d and it was suddenly all over. 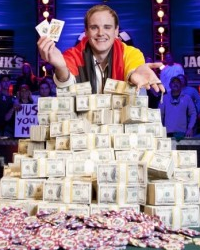 Heinz’s victory continues two different trends: a World Series of Poker champion in his very early 20s, who represents the world’s largest online poker room, PokerStars. He’s the first German to win the Main Event and takes home $8.7 million in prize money for his efforts. Ever the good sport, Staszko, though disappointed, smiled even after being defeated, no doubt buoyed by the realization that he too gets to take home some serious prize money for his runner-up finish: $5.4 million.