Negreanu and Brunson Sound Off on Lederer, Ferguson, and Full Tilt Poker

Anyone who’s ever played a hand of poker online has an opinion (usually a negative one) on Full Tilt Poker and its former figureheads Chris Ferguson and Howard Lederer. Nothing makes for as riveting headlines, however, as when other public figures in the poker world decide to share their thoughts on FTP, Jesus, and the Professor with the rest of us mere mortals at the felt. Over the last couple days, the Web has been abuzz with reactions to Daniel Negreanu and Doyle Brunson sounding off on the issue. 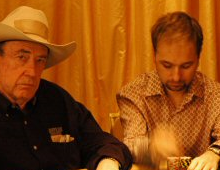 Chris Ferguson Still Hiding? Where the Hell Is He?

Never one to shy away from expressing his truest feelings about everything, regardless of however controversial they may be, Negreanu has repeatedly publicly taken the standpoint of being pissed off at Full Tilt Poker and the people who allegedly ran the operations there. His most recent rant on the matter came in the form of a video blog, where he calls for those responsible to be brought to “Old Vegas-style” justice. If you watch the video (starting at minute 6:00), you’ll see that he pulls no verbal punches whatsoever and is quite expressive in how punishment should be meted out (talk about an understatement!).

Pretty much silent on the whole Full Tilt matter up until now, Doyle Brunson issued a lengthy rebuttal of sorts on his blog, essentially defending his friends’ innocence until proven guilty. Backing up his opinions by reaffirming his many-years-long personal relationships with those poker pros involved, Brunson indeed agrees that plenty was wrong with the whole Full Tilt Poker operation. In a clearly targeted rejection of Negreanu’s rant, however, he protests their innocence until proven otherwise and definitely sees no place for their needing to enduring any physical types of punishment like “taking a baseball bat and crushing their grapes”, the sort of which is advocated by Negreanu.

While Negreanu accuses Ferguson and Lederer of hiding out and Brunson doesn’t argue that they’ve indeed all been silent, Cardplayer Lifestyle did manage to scoop an exclusive story on a chance encounter one of our readers had with Chris Fergsuon at London’s Heathrow airport recently. Unfortunately, Ferguson was pretty tight-lipped then too… With all due respect to Doyle, and though we agree with the idea that “innocent until proven guilty”, we have to side with Negreanu here that Ferguson and Lederer’s deafening silence reeks of guilt. If they have nothing to hide, there would be nothing stopping them from coming out with statements and communicating with the players whose money they’ve allegedly lined their pockets with.

Update Feb. 23rd: Daniel Negreanu has replied via another video blog to Doyle Brunson’s rebuttal (start watching around minute 2:45). He basically echoes our aforementioned feelings on the matter about “silence speaking volumes” and he openly states that he himself has nothing to hide nor has a shady past, so he’s perfectly fine being called out by Brunson to “watch his own words”. It’s good to see that Negreanu has respect for Brunson, poker’s elder statesman, and doesn’t use any profanity in his latest video.