Playing Poker for the Love of the Game

Last month, I was on vacation with my family in the New York area. While our lengthy trip itinerary was overwhelmingly planned around our kids, I knew I’d have a couple of opportunities to play some poker. One of those opportunities was at the Parx poker room, which I’ve already written about. The other was a 2-day, 1-night trip to Atlantic City. Unlike previous trips I’ve taken to Atlantic City, I wouldn’t be able to just sit and play poker all day and night at the tables – after all, this was a family trip. We spent the first day at a great little kiddie theme park called Storybook Land (about 10 minutes from AC) and on the second day we visited the Atlantic City aquarium. My poker time would be during the evening in between and I was determined to maximize it. I ended up playing for 8 hours (8pm–4am) at Harrah’s, where we were staying. 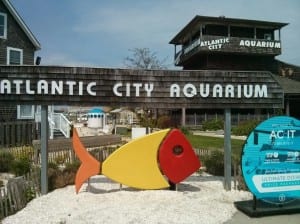 If you’re a poker player, know that THIS is where all the fish are hiding out in Atlantic City.

A Smart Poker Decision I’ve Never Made Before

In retrospect, what stands out to me the most about that night’s poker session is the mindset I had going into it.

As I was leaving my hotel room to head downstairs, I was recalling the fantastic discussion I had back in November with Jared Tendler, author of the Mental Game of Poker (by the way, he just became a daddy for the first time – mazel tov Jared!). When we had met, I revealed to him my biggest leak in live poker room play. What was it? Well, since I rarely get the opportunity to visit the States, I’ve unfortunately got a bug in my head that makes me feel pressured to try too hard to win, which inevitably throws me off my A-game and causes me to lose. 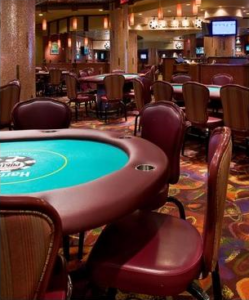 Jared’s solution to my problem was simple. He asked me why I play poker; I responded “because I love the game”. He then repeated the question and I repeated my answer. Then, it clicked. I realized a couple critical things:

This latest poker session would represent the first time I’d be able to put the lessons I learned from Jared into practice. I knew my mood would be ruined if I lost too much money, plus I’d have to transition back into “daddy mode” the next morning and nobody – especially a wife and kids – likes a Grumpy Gus. Why have the special family time ruined by remorse over having lost too much playing poker? THAT (not the money) was just not something I wanted to risk.

So, I decided to play in their nightly tournament and then vowed to myself that I’d just sit and play $2/4 limit Hold’em if I busted out. As it turns out, it was one of the smarter poker decisions I’ve made.

I’ll sum up the poker aspects of the session real quickly for you: I lasted for about 2.5 hours in the poker tournament before having my top two pair busted by a rivered straight. Then I kept to my (own) word and played $2/4 limit Hold’em for most of the rest of the night, losing another $30 in the process. But BOY, did I ever have fun! 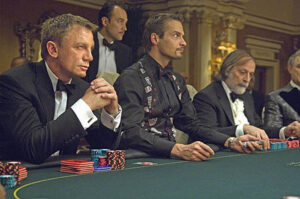 Entering the session with the aforementioned mindset allowed me to completely disregard whether I’d win or lose money, as even the largest potential loss at those limits wouldn’t faze me. It’s almost as if I was already freerolling. Once that issue was out of the equation, enjoying myself came naturally.

I met a lot of interesting people and had some great conversations with them. One guy, Jeff, was an air traffic controller who was on-duty during 9/11 – that was interesting to say the least. I just made sure that the conversation strayed away from the nine topics you should never discuss at the poker table, which wasn’t too difficult :-). Another two players were sitting next to each other and speaking in a foreign language. Rather than get upset, I just asked if they’d be kind enough to speak in English only while at the poker table, then I proceeded to ask them which language. They answered “Romanian” and we spent the next half hour talking all about Romania!

At some point during the night, the table was in danger of breaking, so I suggested the four of us remaining switch the game to Omaha. The other players kindly obliged, keeping the action going for almost an hour until another couple players joined us. Trust me; there are fewer poker games more fun than short-handed low-limit Omaha!

But among my top memories of that poker night in Atlantic City is the feeling I had at 4am, at the end of the session. I just didn’t want to get up from the poker table. It wasn’t because I was on a tremendous rush, hitting cards left and right. It wasn’t because I was stuck hundreds of dollars and felt pressure to play catch up. It was just because I was having so much fun – the same feeling I have at the end of all my poker home games. It was a feeling I’d never been fortunate enough to have in a poker room until that night.

Whether you’re playing by yourself in a poker room, with your friends in a home game, in top-tier tournaments against pros, or in your local poker league, the overriding goal should always be to have fun. Play poker for the money, sure, but first and foremost, play poker for the love of the game. So long as you do that, I guarantee you’ll end up a winner.

Nice article. Many pro’s use the term “recreational player” as a PC word for “fish”.
IMO, a good rec. player, who knows how the regs will perceive him, will have an edge.

Thanks Marc. Yup, I agree 🙂