One of the newer faces in poker is Jessica Dawley. Seemingly popping up everywhere from televised cash games to big name tournaments, it’s hard not to take notice of this lovely lady. Her on-the-felt prowess has earned her the attention of numerous poker media outlets as well as a sponsorship with 888poker. It’s no surprise that Jessica is beginning to field an increasing number of interview requests, as poker fans are clearly eager to learn more about her. She was kind enough to spend some time answering our questions for this interview, and for that we thank her. We hope you enjoy the read. 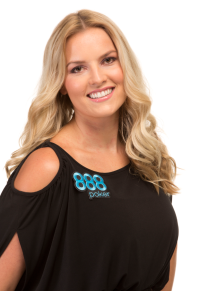 Many poker fans out there are starting to become increasingly familiar with your name and face via your TV poker presence. You seem to be on every episode of Poker Night in America. How did you first get cast for the show and what’s it been like being a part of it?

Originally I was cast for an episode in July 2014 at Maryland Live! 888 had asked me if I would like to play and of course I said yes! PNIA has been an amazing experience. Being able to play high stakes cash on TV was always a dream of mine since watching the pros play back in 2008-2011. I’m hoping to have the opportunity to play on there again in the future.

On the show, they play No Limit Hold’em for stakes of $25/50. Are those your normal stakes? Are you more of a tournament player? Do you actually play other forms of poker more often than No Limit Hold’em?

I normally play $5/10 – $10/25 depending on where and when I’m playing. I’ll play as small as $2/5 if the games are great. I’m definitely more of a cash player but I do enjoy playing tourneys every now and then. I play PLO as well but only if it’s a half/half game with NL.

You’ve talked about your military background in a number of previous interviews. Can you pinpoint a few specific skills you learned in the military that you feel have helped you succeed at poker?

My military experience has definitely helped in many aspects of my poker career. Discipline, situational awareness, critical thinking, and analysis are very important to my game and I owe much of those to the military.

If you weren’t currently playing poker for a living, you’d probably doing what (and why)?

I’d most likely be working in the intelligence field with/in the government or as a contractor on foreign soil. Obtaining a TS/SCI (top secret/sensitive compartmented information) clearance isn’t easy and I had one during my enlistment. Having one opens many doors in the Intel world. I have very analytical side that made working in Intel fulfilling.

You’re a sponsored pro for 888poker. What is it that you enjoy most about your role as a brand ambassador for them?

Being afforded the opportunity to represent a poker brand that continues to have a great reputation with the poker community is very rewarding. Bringing new players and more females to the site and to poker itself is most enjoyable.  I like meeting up-and-coming players on their site and chatting with people from all over the world.

The brand you represent is one of the few currently offering legal online poker play in the United States; specifically in New Jersey. Let’s pretend you had an unlimited marketing budget. What tactics would you try out in order to get more people to start playing online poker in the Garden State?

I have many ideas on that topic. I would first set up a massive live guaranteed tournament with one of our partners. This would bring in roughly 4-5k players and we could sign them up for 888NJ whilst they are they attending the tournament. Something to the effect of “if you sign up for online you get 2k more starting chips.” I would partner with the biggest live poker leagues to get our branding out there. I would partner with as many sports teams/clubs/colleges as possible to get more notoriety. I would sponsor charitable functions/military events to get communities involved. 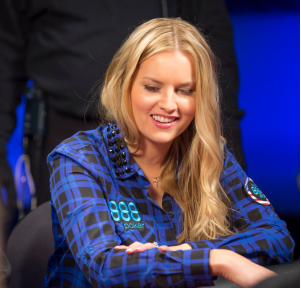 Everyone “in the know” in poker understands that for the game to keep on thriving, more people have to be introduced to the game. With the overwhelming majority of both professional and recreational poker players being men, why do you think that more hasn’t been done to market poker to women?

Laziness and history; two key factors that have kept female numbers down. It’s easier for casinos to keep doing what they’re doing, as changing their marketing strategies takes effort and money. Most of them don’t care enough about poker to focus their sights on this untapped market. Historically speaking, poker by and large has always been male-dominated. Therefore, poker companies mainly market to men. However, for poker to grow, it needs new player acqusitions; women to be exact.

Many people feel that a woman making the WSOP Main Event November Nine would be a “game changer” in terms of bringing more women to the game. Do you agree? Barring that, what else could qualify as a “game changer” to start off a new poker boom fueled by women?

To be honest, no, I don’t think there’s much to that. It’s more wishful thinking on the part of poker players who hope the boom returns. I think for that lucky lady, whoever she may be, yes it will be a game-changer for her. The only thing in my opinion that would change the face of poker would be the legalization of it online in every state.

You’ve got your legion of fans; they want to know: what are your poker goals for 2016 and for the next five years?

My goals this year are to focus more heavily on tournaments, especially during the WSOP, and to play better. Over the next five years, I plan to travel around the world at least two more times, play three EPT stops, and definitely head back to Aussie Millions.

Any last message you want to impart to our readers here at Cardplayer Lifestyle?

Never give up on your dreams/goals no matter how tough or out of reach they seem. Just take small steps each day and eventually you’ll get there. I never gave up on being a pro poker player even though many told me it wasn’t possible. Anything is possible if you want it badly enough and are willing to work and fight for it.

Thanks for this. Great interview.

Awesome 🙂 Glad you liked it. Thanks for reading, Howard, and please feel free to share with your poker buddies and on social media. 🙂