Who Will Conquer the U.S. Online Poker Market upon Legalization?

Exactly five months ago, American online poker players were sent to the rail on Black Friday by their Department of Justice, effectively wiping out almost half of online poker traffic worldwide. Some high-profile poker pros have opted to move abroad to keep playing, but 99% of American online poker fans are essentially locked out for now. Nonetheless, popular sentiment seems to be that legislation will eventually legalize online poker in the United States; the only question being when.

Whenever it does (finally) happen, what remains to be seen is which online poker sites will grab the largest slice of U.S. market share. One thing’s for sure: Full Tilt Poker and Absolute/UB have essentially disappeared from the online poker landscape. This poker blogger doubts they’ll ever reappear again, unless entirely new, trustworthy management teams take over their operations and rebrand them. 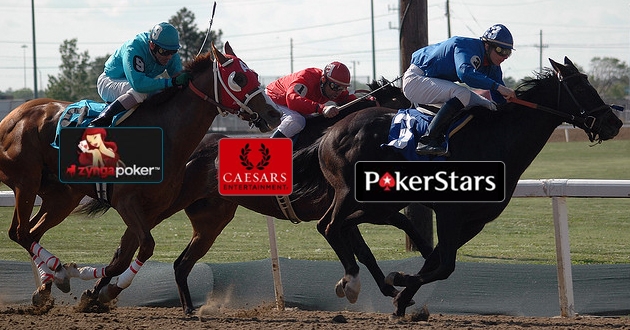 Racing towards #1 in U.S. online poker

PokerStars vs. Everyone Else

PokerStars was the industry-leading poker room before Black Friday. Despite losing a sizeable chunk of their traffic, they’ve successfully refocused their efforts on the European player pool to maintain a seemingly insurmountable lead over the competition ever since. Along with a stellar reputation and excellent brand name, PokerStars has something very unique going for them: they focus exclusively on poker. By comparison, competing online poker products are offered by larger online gaming companies like Bwin.PartyGaming and 888.

While PokerStars will likely be a top destination for U.S. online poker players upon legalization, it should be noted that their reemergence would hinge on whether the Department of Justice would allow it (not something that to be taken for granted at all, as they DID break the law).

In any event, legalization would open the door for some well-known American companies to try and position themselves for a solid market share. Most notable among these are land-based casino giant Caesars Entertainment and Zynga, the social network game developer.

A multibillion-dollar company, Caesars surely has the professional infrastructure and wherewithal to enter the online poker market. As they own the World Series of Poker, my guess is that Caesars would create and promote some sort of WSOP-branded online poker room. Already a known and well-respected entity to millions of American poker players, Caesars Entertainment would possess the unique ability to tie their new online poker room together with their unrivaled Total Rewards program. Furthermore, in principle, they would also be able to offer online satellites and prize packages to poker tournaments at any of their approximately 50 land-based casinos throughout the country.

As evidenced by their recent purchase of the Playtika social network, Caesars Entertainment clearly has their sights set on success once online poker opens for business in the U.S. With such incredible potential, this poker blogger wouldn’t be surprised to see Caesars Entertainment become a huge player in the U.S. online poker market almost immediately upon legalization.

Cardplayer Lifestyle first wrote about Zynga Poker back in March, and the social poker network’s growth has only increased since then. A database of approximately 40 million players translates into staggering potential revenues from real-money play.

Like Caesars Entertainment, Zynga too has taken steps towards preparing for the eventual legalization of online poker in the United States, having acquired MarketZero, an online poker tracker company. Moreover, Zynga Poker is no longer exclusive to Facebook, as it is now supported by Android, iPhone, MySpace, and Google+.

Aside from Caesars Entertainment and Zynga, other new players may emerge to try and grab a slice of the American online poker pie. To that end, some smaller land-based casinos, such as the South Point in Las Vegas and the Barona in San Diego, have already set up play-for-free online poker sites, which they’ll be sure to monetize once it becomes legal. In preparation for the opening of a wide open market, surely others are likely to follow suit.

Great article.I really enjoy reading your blog. Keep it up.Thanks for sharing with us.Keep up the good work.

Like I said in October IGT will be the one to bet on for online poker. Nevada yesterday passed into law to let online poker legal in Nevada. Nevada is the first. Put your $$$ on igt and buy their stock “NOW” It is up to the feds to complete the process

Thanks for your comment Ernest – yeah, you might’ve hit the nail on the head with this one. Anyhow, I encourage you to join our Facebook group, to have a more direct interaction with our fans.
https://www.facebook.com/pages/Cardplayer-Lifestyle/119861838081917