Sometimes you just have this gut feeling that you’re on the cusp of seeing something historic unfold. This is one of those times. Poker is about to change for the better, and it’s going to get a hell of a lot more popular – starting this Sunday. A brand new poker show is set to debut that will undoubtedly generate a whole new wave of mainstream excitement for the card game we all know and love.

This Sunday night, and every Sunday night thereafter for a long time to come, it’s going to be Poker Night in America. That’s the name of the poker show set to be broadcast on (no less than!) the CBS Sports Network. Finally a show has come along that has the potential to get the average Joe and Jane excited about poker all over again.

What Happened to Televised Poker?

Back in poker’s boom years, pretty much any time you’d channel surf you’d encounter poker on TV. Whether it was on ESPN, the Travel Channel, GSN, or another network, broadcasts were everywhere. Celebrities were playing; poker was hip and cool. 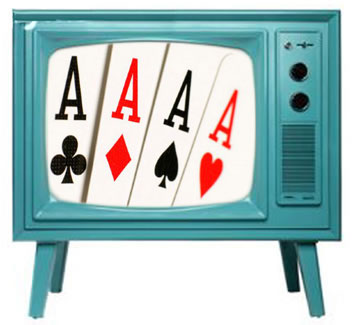 Though there are quite a few reasons why this happened, here’s an oversimplified summary of one of the main ones: the “poker story” that was being shown on TV just got too repetitive. Casual fans simply got tired of seeing the same standard all-in confrontations between a big pair and two overcards in broadcast after broadcast. Most shows evolved to showcase the poker being played in greater depth, both on camera and via the accompanying commentary, to cater to an understandably more knowledgeable fan base. The problem with that was that while hard core viewers might’ve stuck around, the recreational poker player fan base – i.e., the overwhelming majority of mainstream viewers – became alienated.

Post Moneymaker boom, as the years went by, most poker shows stopped dedicating airtime to creating stories around the game’s personalities, instead more often choosing to emphasize the game itself. Much as I hate to admit it, the fact is that watching poker being played just isn’t entertaining to the average viewer. And that’s even after a whole bunch of editing to show only the most interesting hands! When people watch TV, they want to be entertained. If they’re not, they’ll change the channel quicker than you can say “all in”.

While a couple of the better-produced shows, like the WSOP broadcasts, have survived and enjoy the “remainder” of die hard poker fans as their audience, most have gone the way of the dodo.

Indeed, it would seem that it would take a miracle to get a new poker show on TV these days. What it actually took, however, on top of a hell of a lot of persistence and hard work, was a visionary who understood how to get people to start tuning in again.

Two years ago, Todd Anderson had an epiphany. The original creator of the Heartland Poker Tour realized that viewers weren’t tuning into poker on TV anymore because, at the core, it wasn’t just the poker they had found so interesting, but rather the characters playing the game. Thus was born the idea to create Poker Night in America. 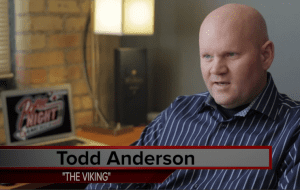 Anderson’s blueprint? Invite some of the best-known, most engaging people playing the game of poker to star on the show and sit them around a table for cash game sessions. Don’t make them play for amounts of money that make them uncomfortable. Have them play at stakes where, while they’re trying to win (it IS money after all), that aspect takes a backseat to them being able to have a good time. The less financial stress on the players, the more they can let loose and have fun.

This type of TV production strategy is designed to create characters out of these poker players. It lets their phenomenally engaging personalities shine through. People can – and DO – get invested in characters. Viewers can’t identify with poker players, but they sure as hell can identify with characters they see on screen.

I got a special sneak preview of the pilot episode. Anderson’s blueprint works. This is must-see TV. It’s no wonder Todd was able to get a reputable network like CBS Sports to agree to broadcast Poker Night in America. They’ve got solid gold on their hands and I’m sure they know it too.

Who Are the Poker Night in America Cast Members?

Anderson recruited WSOP Media Director Nolan Dalla to join the Poker Night in America team as the Creative Director and Head of Player Relations. A beyond-brilliant poker writer and the game’s foremost historian, I’d contend that there’s nobody in the world more in touch with the pulse of poker than Nolan Dalla. There’s also probably nobody in the industry more respected and well regarded by professional poker players. (Side note – PLEASE, somebody get this man into the Poker Hall of Fame already!) 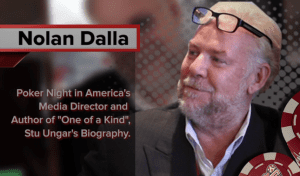 As a close observer of the poker scene, I can assure you that Dalla and Anderson picked a fine cast indeed to star on Poker Night in America. The show’s slogan is “bringing the personality back to poker”. I couldn’t think of a description more apropos. Just look at some of the amazing personalities they’ve got in their lineup: 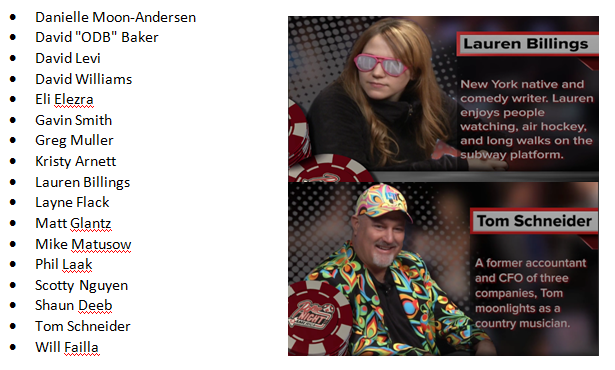 If you aren’t familiar with some of the people listed, don’t worry. Within a few episodes of the show airing, I believe almost all of them will be on their way towards becoming household names.

What Else Makes Poker Night In America Unique?

Right from the get-go, part of Anderson’s vision was that he wanted the show to be aired on national television at the same time every week. That makes perfect sense in terms of attempting to capture the largest possible target audience.

The show’s title is incredibly far-reaching, but it represents something every American can identify with (though I’m sure poker fans all over the world will love the show). Moreover, the set time slot each Sunday night helps anchor the show and lends to it an episodic structure – much like any other TV sitcom, drama, or reality show. All those shows feature characters that fans can get invested in; so does Poker Night in America. Moreover, because of the nature of what’s being broadcast, I’ve got a hunch that each episode will be able to stand on its own, which makes the show an excellent candidate for repeat viewing and attracting new audiences each time any episode airs.

Trust me when I tell you that, very quickly, people across the United States will come to feel that every Sunday night, starting at 10 pm Eastern/7 pm Pacific, is Poker Night in America.

I follow everything that goes on in the poker world pretty religiously, but even I stopped watching poker on TV quite a while ago. So have all my home game buddies. That’s not to say we don’t love the game of poker anymore – we’re all still very much into it.

We reminisce occasionally about some of the great poker TV we used to see on shows like High Stakes Poker. It used to be the case that each time we’d convene for a weekly home game we’d intersperse the poker discussion with talk about the great episode we had just seen a couple nights prior. We’d reenact the scenes and talk excitedly about what we saw on screen. We just don’t do that anymore.

But I’m pretty positive that this show is something we’re all going to be talking about. And you will too. And so will your poker buddies. Don’t be surprised if seemingly random people start nodding knowingly if you mention the names of one of the Poker Night in America players. They’ll be watching too.

The fun begins this Sunday night, with two half-hour episodes slated to air back-to-back. A total of 26 episodes are scheduled to air, with replays available both on CBS (in a different time slot) as well as online at www.pokernight.com.

Poker is about to become fun all over again.