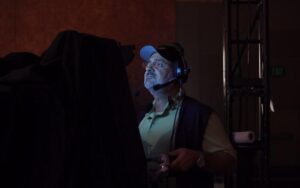 I had media credentials to the latter two of these events thanks to Cardplayer Lifestyle poker blog founder Robbie Strazynski and Sandra Yacura of Poker Central. It was very cool getting to stand on set while legendary poker pros like Daniel Negreanu, Phil Ivey, Scott Seiver, Antonio Esfandiari, and others competed for millions of dollars in the Super High Roller Bowl.

After the field narrowed down to just two players, Brian Rast beat out Scott Seiver in an exciting heads-up battle and took home a cool $7.5 million for his efforts. Also at the final table was the legendary Erik Seidel. It seems like he cashes in darn near every high roller event he plays in. It was a pleasure to watch him play in person.

All of the events that comprised the Super High Roller series are being produced by Mori Eskandani of Poker PROductions. You’ve probably seen tons of his work over the years (e.g., High Stakes Poker, Poker After Dark, etc.). I got to meet Mori while covering the eventsand he was gracious enough to answer some questions about the production of the Aria Super High Roller Bowl and the future of poker on television. I hope you enjoy!

Mori, thanks for joining us, how are you?

My pleasure, thank you.

Let’s start with the Super High Roller Cash Game. You previously produced High Stakes Poker, which was a very popular cash game show on Game Show Network a few years back. How will this one compare to High Stakes Poker?

I’ve been asked that question before. All cash games are inherently the same. It’s people who play every day. We try to go “into their office” and catch them while they’re playing. Poker After Dark and many European cash games were produced for television. High Stakes Poker was the first one, which is why it sticks in everybody’s minds.

The Super High Roller Cash Game featured today’s cash game players. The stakes are a little bit higher than they were on High Stakes Poker.

Comparison-wise, I would say it’s “just another cash game”. 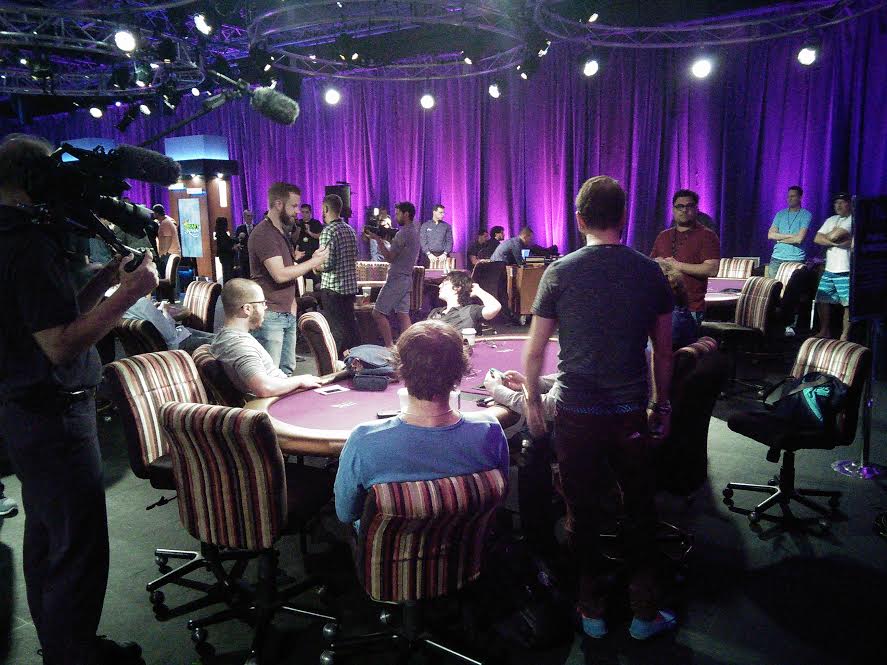 How did you go about selecting the players for each day?

For cash games, it’s almost as though the players select themselves. You go into big games and see who is playing. They’re not all pros, it’s also recreational player businessmen who like to put their money in big cash games; it’s a thrill for them. We try to catch some of those guys.

Of course we also try to catch some of the best known cash games players, like Doyle Brunson, Johnny Chan, Patrik Antonius – guys who are mainly cash game players. We try to bring a mix of guys who have been playing for a long time as well as guys who are new on the high stakes cash game scene.

Before Black Friday, poker on TV was very popular. But outside of the WSOP and niche shows like Poker Night in America, poker is pretty much gone from mainstream television nowadays. Do you envision the Super High Roller Series helping to bring poker back into the limelight?

It’s always nice to have the network get behind the programming. In this case, it’s Poker Central getting behind the Super High Roller series; whatever events we are producing for them. Once you have the network behind you and their salespeople finding sponsors for the show, air dates, and other things like that, it’s a big plus.

For the WSOP, ESPN is a huge part of it. The same was true of High Stakes Poker and Poker After Dark. With this one, obviously we have Poker Central, the 24/7 poker network. So, I’m looking forward to many years of Super High Roller events for them.

When poker became popular on TV a dozen years ago, the personalities were great. Hellmuth, Negreanu, Matusow, and others always put on a show. Do you feel that the new school players have the same sort of charisma to make the show entertaining?

The younger kids, most of them have been brought up on the Internet, where there’s so little interaction. Maybe they have to get used to live games a little more. In the old days when we taped, part of our work as professionals was to entertain the recreational players. If they got into the game, we made sure they had fun.

You come to the game or to a poker room and you see a table that is full of laughter and having fun, and you would want to get into that game. Being entertaining was part of the game of old school poker.

Kids we’re filming now may be plenty entertaining, but maybe not to the same degree as we’ve seen from the older players. 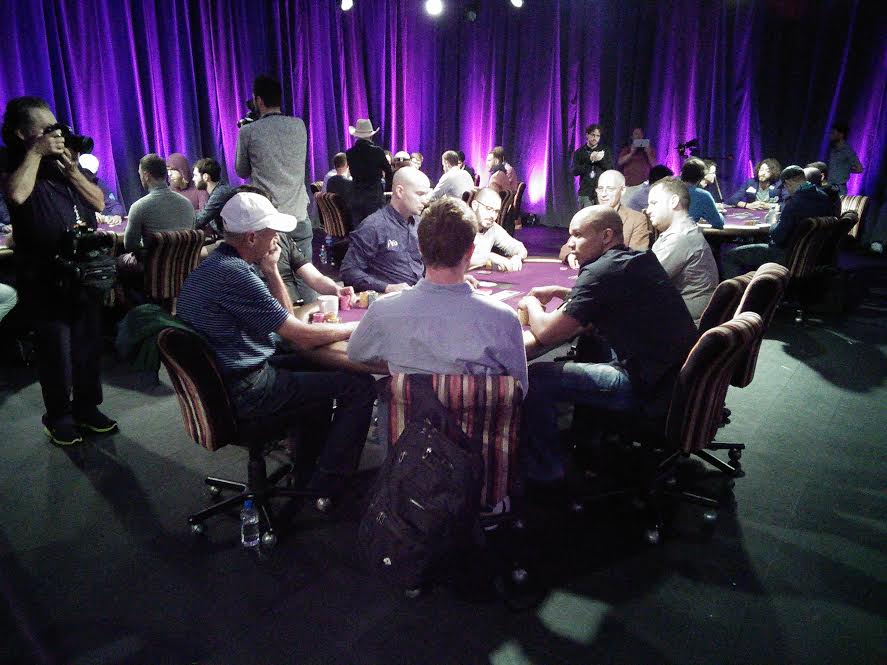 I got to see the $500,000 buy-in Super High Roller Bowl up close and I can’t wait to see how you put the tournament together for TV. Can you give me a hint of some features I didn’t get to see in person, but will when it airs on NBC Sports Network in the fall?

Most of it is going to be the poker hands and the poker tournament. The features will be geared towards introducing the new players. There will obviously be a ton of new faces. Our poker role is to let people know who they are. The issue is that you’ve got a lot of superior players who, one way or another, have not made final tables of big tournaments, so you don’t get to know them.

So, again, we’ll be focusing on interviewing new players.

A dozen or so players, guys like Tom Dwan and Phil Hellmuth, who originally committed to the Super High Roller Bowl didn’t play. Were you at all disappointed with the turnout?

I was not. Look, it’s a $500K buy in. If 40 players play it’s a huge win. The fact that it went over, it’s a testament that poker at the highest levels is still alive and kicking. It was nice to see that many players. A $21.5 million prize pool, I wasn’t disappointed one bit.

I know Tom Dwan wasn’t even in the country. Next year, poker players will know that this event is here to stay and they’ll plan better for it.

When producing a poker series for TV, do you try to influence the players to keep the banter at the table interesting or do you just let them do their thing?

I encourage them to talk a little because filling the silence is tough. You can only do so much commentary, unless of course it’s a huge hand, which doesn’t necessitate saying much. So, I encourage players to be themselves, which usually leads to a lot of table talk. 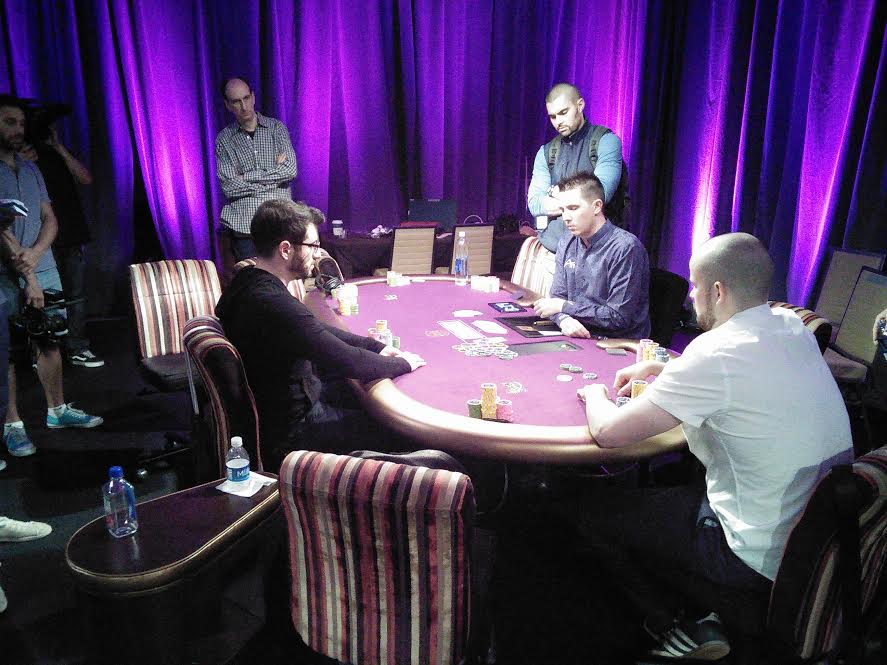 Any chance of bringing back the National Heads-Up Championships, High Stakes Poker, or Poker After Dark in the near future?

I’ve always said that there will be more poker shows in the future than in the past. That means a whole slew of new shows will come. The bottom line is what our government lets us do with Internet poker. If they allow people to play online and create more interest, we’ll obviously be able to do more of these shows in the future. I know the shows you mentioned were VERY popular. Those shows will be first in line to come back, someday.

About those big companies that sponsored that poker TV, like PokerStars and Full Tilt Poker… I don’t know how closely you follow the U.S. government regulation stuff, but do you have any optimism for those sites reentering the U.S. market and maybe that helping bring back poker on TV?

I don’t want to focus on the sites. I want to focus on the game. It’s not something that can be taken away from the fabric of our lives. It’s part of our culture. It’s here to stay. It’s not a fad. Millions of people will keep on playing. I’m sure our politicians and organizers will find a way to make this work.

When that comes to life, it’s not just going to be the online sites to take sponsorships in poker. We see it already right now – many sponsors aren’t connected to poker. So, I think it’s going to take a long time, but eventually it will come.

Of course! If lawmakers make online poker happen again, of course the game will boom once more. I don’t see any reason why it wouldn’t, especially if the big casino companies use their clout to get behind it. These guys know what to do with poker and how to market it and get us going.

In closing, can you tell our listeners and readers who the commentators are going to be for the Super High Roller events?

Kara Scott and Jesse Sylvia are going to be doing the Celebrity Shootout and the Super High Roller Bowl. The cash games commentators are yet to be announced.

Alright, we’ll wait for that news. Thank you Mori for joining us today; I appreciate it.

Thank you so much; you too!