Welcome back once again to the Great American Poker Trip. My name is Jack Laskey and I’m a co-host of the Just Hands Poker Podcast. My partner in podcasting and other degeneracy, Zach Resnick, and I started in Washington D.C. and are slowly making our way to California on a poker fueled road-trip. Along the way I’m taking some time to reflect on the trip highlights and the poker scene across the country. Last week we were in Houston, and now we are at our eighth stop, Las Vegas.

A quick aside… Tragedy unfortunately seems to be following the Great American Poker Trip. I just want to take a moment to acknowledge the recent shooting in Vegas and to wish my best to the friends and families of all those affected. I hope you will do the same. In the meantime, please continue to give to first responders such as the Red Cross, and don’t forget about the horrific hurricane damage in Puerto Rico. Once again, for a great guide to charities using their money well, head to https://www.charitynavigator.org. Now, back to the trip…

People headed to Vegas are generally in a rush to get there, but not often by necessity. For Zach and I, the sprint from Houston to Vegas was brought on by an upcoming rendezvous with two additional road trippers. Jon, a Cleveland-based pro and one of my oldest friends, would be beginning a two-month West Coast stint culminating in the WSOP. Mark, another Cleveland crusher, would have to get back to some dinky engineering job at NASA, but would be with us for our week in Vegas. We left Houston with 48 hours to get to Vegas, 24 of which would be spent driving.

Interstate 10, our primary highway since our second stop, in Florida, would take us through Texas into Phoenix. The Houston folk bragged to us through a number of home games about their own personal records getting to El Paso via I-10, taking thorough advantage of the 300-mile 80 mph section past San Antonio. Maybe doing Texas in 7 hours is possible during the day, but it proved to be a more harrowing journey under the moonlight.

As an Ohio native, I’ve met my fair share of deer, some face-to-face, others bumper-to-hind-quarter. The Midwestern variety are big, dumb animals. They clearly yearn for death by vehicular collision as evidenced by the sprinkling of carcasses along the major highways of the Buckeye state. Deer in Texas have a vastly different game-plan. Smaller and stealthier, these desert doe simply stand on the side of the road at regular intervals and stare, their beady eyes illuminated by headlights. In Ohio, you’ll see two dead deer for each living. On I-10 with 50+ miles between rest stops, we saw dozens of deer without a single casualty. It was extremely creepy.

Naturally, we arrived in Vegas exhausted and ready to gamble.

There are plenty of great poker cities in the US, several of which have been covered in this series. The best of those present options, multiple poker venues offering excitement and possible riches. Still, in basically every case you have to make a choice of venue and stick with it. For example, you probably aren’t going to hit National Harbor, Maryland Live!, and the Baltimore Horseshoe in one night. The Las Vegas Strip is the exception, with at least 10 viable poker rooms all within walking distance.

For the low- or mid-stakes grinder interested in maximizing profits, one has to treat the Strip as the world’s largest casino. The reason why is simple. The day-to-day faces in Las Vegas poker rooms are not the folks with whom one wants to be playing. This isn’t to say Vegas regs are too good to beat. It has more to do with style. The Vegas regs are some of the nittiest around, pros and weaker regs alike. The fewer of them at the table, the better.

So where are the tourists? Truthfully, they could be anywhere. There’s certainly some predictability. Aria, The Bellagio, and The Encore are always good bets, but for those who want to consistently put themselves into the best possible games, they have to be relentless in their pursuit. With the Bravo Poker Live app as one’s guide, take to the Strip, stroll the rooms, and don’t settle for a reggy game!

There aren’t many places with more of an insider-outsider culture than a Vegas poker room. The insiders, pros and bad regs alike, make surprisingly little effort to disguise themselves. This isn’t necessarily unlike other casinos, but the context of the behavior is rather different. In your typical American casino, most poker players will be semi-regulars and almost all will be locals. Against this familiar clientele, disguising one’s intentions from new players serves less utility, perhaps less than what bringing a backpack full of sammies provides. In Vegas, the plausibility of being a tourist would have a much larger effect on one’s bottom line. On the other hand, diving into a den of sharks is perhaps part of the appeal of playing poker in Vegas, at least to some tourists.

Regardless of the profitability of this divide, the result is almost that of two different worlds existing simultaneously. On the tourist side, there is a degenerative camaraderie very much unlike the typical poker game. Perhaps losses are less painful when already accounted for in the vacation budget. Free booze helps too. This reverie is sharply contrasted by the stoic presence of hooded headphoned grinders, and if these full-timers aren’t silent, they are more likely to be engaged in a neighborly discourse with another pro than involved in any truly upbeat banter. Unsurprisingly, the major unifier between the two classes is good action, although that isn’t always easy to come by in Vegas poker games. Nothing gets everyone smiling and cheery like a whale. 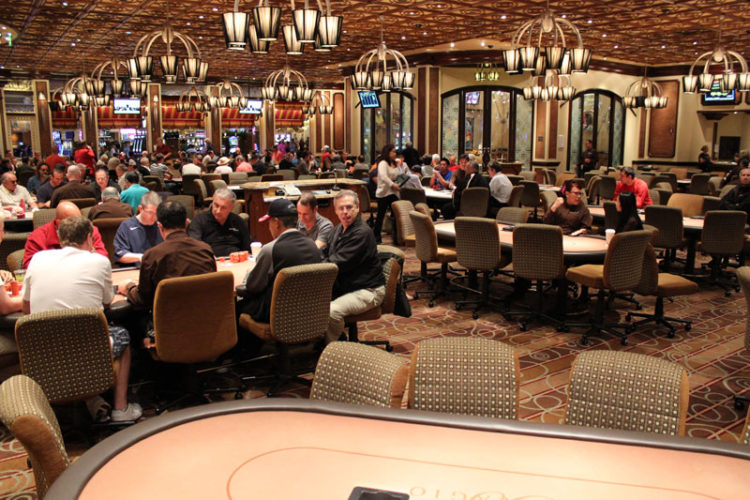 Vegas presents no shortage of options. Most games, stakes, and structures are offered somewhere on the Strip. The process of evaluating the profitability of these various options on any given day can be time-consuming. As mentioned above, the Bravo Poker Live app is your friend, and making friends with a few pros who stick to one room or another can be helpful in determining the best place to play. This is true for pros and rec players alike. A good game is a good game for all.

While the peak game quality in Vegas is fairly high, the average game quality is much lower. There are a lot of very tight games in Vegas which limits both fun and profitability. For the gambler who is willing to do some walking (or Ubering), great games are waiting to be found. However, sitting down at a random table is a much riskier proposition than doing so in South Florida, for example.

If you could play at a table with only tourists, then this would be a clear 10/10. Playing poker with people on vacation is way more fun than playing with people who’ve just finished a long week of work. The pros bring the vibe down a peg or two, but Vegas is almost always a perfectly pleasant place to play.

Even though most of the Strip is owned by just a few corporations, the poker rooms still benefit greatly from the competition. Free drinks, good promotions, and super-low rake are all standard fare in Vegas poker rooms. If one plays their cards right, a poker trip to Vegas can be an extremely affordable vacation, at least in expectation.

Who doesn’t love desert mountains? Vegas is a lot of things, but it isn’t boring. For a 90% poker trip, there may be superior destinations, but for a 50% poker trip, Vegas is hard to beat. Plus, whether by Uber, rental car, or any means of public transportation, pretty much every poker room in Las Vegas is easily accessible.

Vegas in 2017 may have lost some if it’s original charm, but it’s still a unique place for gambling. With so many tourists and so many poker rooms, it’s hard to go too wrong in this town. There are plenty of poker markets with softer competition, but Vegas is going to stay relevant to all poker players for a long time.