This is now the fourth year running in which I’m setting poker goals for myself. Importantly, I believe that there’s a difference between making traditional “New Year’s resolutions” as opposed to setting goals. Resolutions seem to me more like vague aspirations; e.g., “I resolve to eat healthier this year and lose weight this year.” Goals, on the other hand, are concrete achievements you feel you can drive yourself to accomplish despite the degree of difficulty. 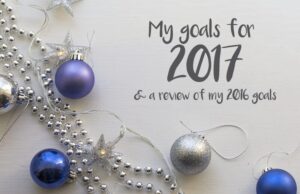 But, before diving into my poker goals for 2017…

What about Last Year’s Poker Goals?

An accounting of “how I did” for my 2016 poker goals is in order. In previous years I had set 10 goals, but last year I only had five:

Though I only got around to running my first one in September, I was able to sneak the second one in last week, just before the finish line. Here’s a recap of what it was like.

Over the course of the year, I played tennis 31 times and ran over 250 km, which resulted in my donating over $400 to Kids Kicking Cancer.

To be sure, I had my chance to accomplish this goal this summer, when I traveled to the WSOP for the first time. I was in Las Vegas for approximately 1 week and I sure played tons of poker; probably somewhere between 50-60 hours’ worth. What I realized as time wore on, however, was that I’d be risking too much “happiness EV” if I took my shot and wouldn’t be able to book a win.

I had the absolute time of my life at the WSOP – watch my recap video – and I know with 100% certainty that my happy memories would’ve been forever tainted with remorse if I’d have lost big. Sure, you can’t win big if you don’t play big, but as a recreational player I play primarily to have fun.

Perhaps this is a goal I’ll set for another time, but while I didn’t rise to the challenge this past year, at least I can confidently say that I have no regrets.

My stated goal was to try and take a public stand against personal attacks so as to inspire my fellow members of the poker community to do the same. Though it’s impossible to gauge how effective the message was, 2016 #pokertwitter was quite simply a cesspool, to say nothing of personal attacks levied in other poker media outlets.

Honestly, it’s just a shame. Perhaps it’s just really hard for people to change bad habits? Maybe as we all get older we’ll all get a bit more mature, too? Here’s hoping that, at the very least, there will be fewer personal attacks within the poker community in 2017.

As far as my own efforts were concerned in this regard, I’m proud to look back on a clean record. With that said, I do feel that one instance came up over the past year where I was at least partially guilty of a personal attack on a poker player. It bothered me at the time, and I apologized sincerely and profusely for it. The player was magnanimous enough to accept my apology, but I still feel a lingering guilt that will stick with me for a long time.

To me it feels better to miss a tough goal than to reach an easy one.

My stated goal was to maintain people’s trust and ensure that everyone who provides services for me, whether for my full-time position or for my independent side pursuits, would get paid in a timely manner.

Nobody likes someone who boasts publicly, but in a time when payment delays by companies sadly remain commonplace and players continue to welch on their debts, I will absolutely proudly boast about having a spotless record when it comes to paying my contributors in a timely manner, always within 48 hours of them submitting their work (and usually within just a few hours).

It’s a badge of honor to have (hopefully) developed a reputation as someone in the poker industry who pays on time, and this will continue to be my modus operandi.

As difficult and time consuming as this annual tradition is, I’m very happy that I do it as it forces me to take a step back from “getting on with life, running on autopilot” and, instead, think hard about things I’d like to achieve in the coming year. Plus, the long-term benefits of having specific things to focus on for an entire year – especially as I run this site as an extracurricular activity – are immeasurable! This exercise has helped me accomplish quite a few great things, so here’s hoping this year’s efforts will bear fruit.

Truth is, 2016 really kicked ass for me as far as all things poker were concerned. While it’s hard to imagine being able to pull off a poker year that “tops” 2016, I want to do everything in my power for this year to matter and to have as much of a positive impact as possible, so…

1. Rebranded Interview Series: Get to Know the Poker Media

Midway through last year, I decided to start a series called “Get to Know the Poker Writer,” which I’m glad to say has gotten a great reception. I realize, in hindsight, that I aimed too low – plenty of poker industry people deserve some spotlight and attention, not just the writers.

I’ve managed just fine running this poker blog for over seven years without what I would call a “comprehensive plan.” Overall, my goal is always to produce interesting and entertaining poker content for your guys to enjoy, and that’s not about to change anytime soon. That said, it’s obvious that approaching that goal in a systematic, organized fashion would be far more optimal.

So, from now on, right after I send out my monthly newsletter (usually by the 20th), I’ll aim to construct a poker content calendar for the following month. Hopefully, this will allow me to increase my productivity both qualitatively and quantitatively.

To fully understand why this seemingly innocuous desire is a “goal,” I feel the need to explain my “situation.” I live in Israel, where there aren’t any legal poker rooms. Also, I work a full-time job and am married with three beautiful kids. That basically means that I need to travel abroad and take vacation time away from my work and family in order to have a poker trip.

To quote my lovely wife’s response to hearing that I’d make this a goal: “if someone else funds it, I’m rooting for you.”

Realistically, I see three possibilities of achieving this goal:

Over the years, I’ve found that some of my best content gets created – and some of my best relationships are forged – on poker trips. So, here’s hoping the stars align at least twice in 2017!

As mentioned above, last year I managed to put together two charity poker nights, during which an overall total of about 40 participants raised a total of about $750.

I truly love running charity poker events and those who have participated over the years always seem to be clamoring for more. So here’s to doubling last year’s output on all fronts.

I’m not yet certain which charities will be the beneficiaries, but I’ll be sure to list them when recapping at the end of the year.

Also, I’d like to take this opportunity to publicly give a shout out to my awesome father, Dr. Josef Strazynski, who kindly offers us use of his office space to host each event. Love you, Dad!

I have a hunch that there are plenty of great poker stories out there that need to be told, so I’m going to give you an incentive to tell them!

The idea is to announce – via blog post – six different contests throughout the year whereby you can participate and earn a chance to win cold hard cash.

Winning entries will be published right here on Cardplayer Lifestyle and shared with the poker community, you’ll all get the chance to “see your name in lights.” 🙂

We’ll track everything on Twitter with #pokerblogcontest and the rules will be made clear prior to each contest. I look forward to giving away some money, but even more so to hearing all of your poker stories this year.

This is the REALLY big one. In a nutshell, I want to accomplish two things:

While 1,000km is indeed a challenging number, I’d just like to illustrate why that number will be extra tough for me to hit:

To be sure, I’ll be working hard towards all the goals I’ve said. With that said, I feel that Poker Hall of Famer Linda Johnson (read our interview here) hit it right on the nose with her message for the coming year:

Make 2017 your best year yet! Work hard and play hard. Spend time with loved ones. Be positive. Don’t sweat the petty things. Life is good!

That’s good stuff right there!!! I am inspired!!!