What’s It Like to Meet Antonio Esfandiari in Person?

As one of poker’s most popular and well-known personalities, there are millions of people around the world who know and love Antonio Esfandiari. It’s the rare poker magazine that you’d flip through and not see his picture included or name mentioned somewhere. As a matter of fact, just after typing that last sentence, I actually picked out five poker magazines at random from my collection to test the theory and, indeed, there was an image of Antonio in each one. Of course, he’s also been a ubiquitous presence on practically every poker TV show for over a decade.

I haven’t yet seen it, but I imagine that watching the Poker Central-produced Pokerography: The Story of Antonio Esfandiari is as close as most of us will ever get to knowing him.

Undoubtedly, most casual poker fans out there would relish the chance to meet “the magician” in person; myself included.

As many longtime followers of the Cardplayer Lifestyle poker blog know, I live in Israel – not exactly the world’s poker hub. We sadly don’t even have a single legal live poker room here in the Holy Land! Thus, the opportunities I get to meet professional poker players are few and far between. Naturally, I couldn’t believe my eyes when this Tweet from Antonio appeared in my feed:

Wine tasting at Chateau Golan Winery in Israel today. Special TY to my friend @noamlanir 4being such a gracious host pic.twitter.com/1lhoPKxnzS

Scrolling through his earlier Tweets, you could imagine my surprise – somehow I had missed that he was visiting my country and had already been here for five days!

@MagicAntonio Wait – whoa – you’re in Israel?! Will you be making it to the Tel Aviv area at all? — Robbie Strazynski (@cardplayerlife) December 6, 2015

Antonio was kind enough to reply at a little after midnight local time. I was already asleep, but I woke up to this message:

@cardplayerlife I am in Tel Aviv now. Near Rothschild Blvd. Leaving tomorrow back to the States. Amazing trip.

Realizing that I’d only get one shot, and putting my chances of success at roughly 1%, I got into work the next morning and nonetheless decided to try something out-of-the-box. I’ve come to realize over the last few months that as much as I love to write, sometimes a video has a greater effect. It resulted in this:

Lo and behold, Antonio responded a couple hours later – in the affirmative – with an invitation to come and meet him for brunch!

Is This Really Happening?

Spontaneity doesn’t happen all too often during my regular 8-to-5 workday, but believe me when I tell you that we jumped into a cab quicker than Antonio could bang out 62 pushups at the World Series of Poker.

Right as we stepped out of the cab, I noticed Antonio sitting in the window of the restaurant. Upon entering the establishment, he greeted us very warmly and introduced us to his friends, with whom he was traveling, as well as his father.

The next hour or so simply flew by, as we discussed a number of interesting topics. I particularly enjoyed hearing about the group’s travels around Israel during the past week and was happy to answer all of Antonio’s questions about my keeping a kosher diet.  I couldn’t help but smile when that topic led to a prop bet being made about whether there were more kosher restaurants or vegan restaurants in the world. While I can’t say I’ve seen every episode of “I Bet You”, it was pretty surreal to witness such a prop bet happen right before my eyes. 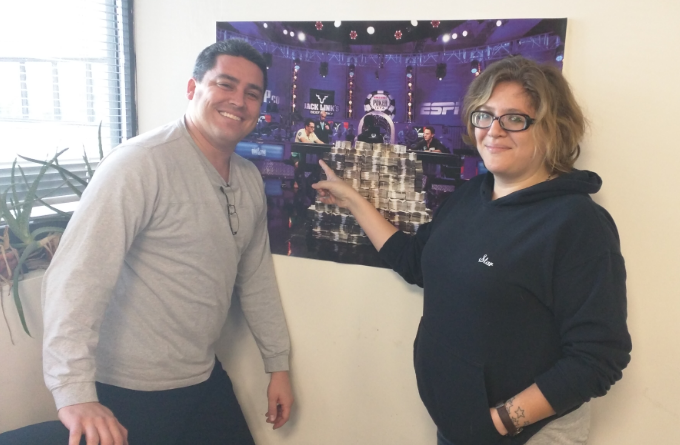 The picture of Antonio, heads up at the 2012 Big One for One Drop, that we have hanging in the office

The Apple Doesn’t Far Fall from the Tree

As noted, along with the thrill of meeting Antonio, I had the pleasure of meeting his father, Mr. Bijan Esfandiari. A soft-spoken man with a gentle demeanor, Mr. Esfandiari is the kind of person who I immediately felt I could sit and listen to for hours. I can’t begin to imagine how many fascinating stories he has to tell.

After the meal, we all stepped outside, where Antonio was kind enough to take a few pictures with us. What struck me throughout the meal, but particularly at that moment outside the restaurant, was just how close father and son were to one another. Anyone who has watched Antonio win the Big One for One Drop in 2012 has seen his father’s face. Thousands of miles away from the big ESPN cameras, however, it was crystal clear to me that Antonio and his father shared a very special relationship.

After handing a little birthday gift to Antonio, I had the good fortune of capturing this beautiful father-son moment: 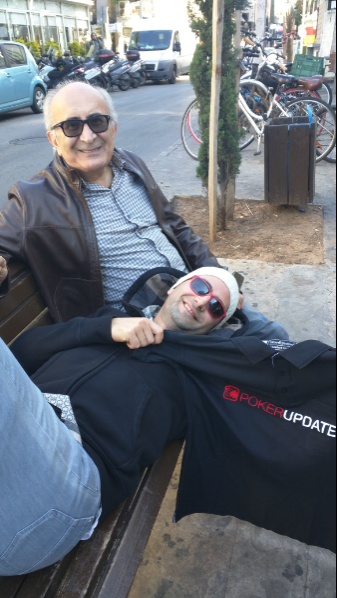 One of the greatest gifts of independently running this poker blog is that it provides me with a platform via which to occasionally tell some fun stories. Not every published poker article has to be a strategy piece, infographic, op-ed, or interview. There’s a time and a place for those types of content. By the same token, there’s a time and a place to wax poetic about the lifestyle of a card player.

A short while after I got home from work, I heard my phone beep with a notification of this message from Antonio, which he shared publicly:

i could not refuse once they dropped the ‘One Time’ on me. Was fun meeting up Robbie. Be well. https://t.co/qoutOX0FTy

Upon my arrival to the restaurant, Antonio had confided to me that, in all his travels around the world, he had never invited a fan to join him, and that it was that short little video that made the difference.

It’s no accident that Antonio Esfandiari is thought of as one of poker’s greatest entertainers and ambassadors. As I learned firsthand, one need not be playing cards with him to be captivated by his charisma and charmed by his zest for living.

How wonderful it was to have been given the opportunity to spend some quality time with him.

Thank you once again, sir, and happy birthday! 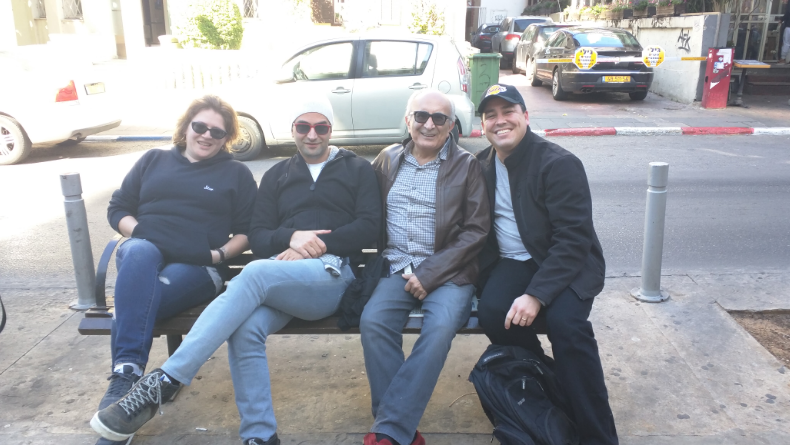