The attorney for the Bernard Tapie Group, Benham Dayanim, has publicly stated that among the issues holding up final settlement of Full Tilt player payments are the debts of a few high-profile poker pros. Dayanim claims that Phil Ivey, Layne Flack, David Benyamine, Mike Matusow, Barry Greenstein, and Erik Lindgren owe the now-defunct Full Tilt Poker between $10 to $20 million combined. That these monies haven’t yet been repaid is apparently a main factor preventing the Bernard Tapie Group from moving forward with their plans. 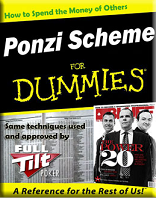 Cardplayer reports that Benyamine and Flack have owed more than $2 million apiece since 2007, while Ivey and Lindgren each owe the former online poker site about twice as much. The amount Matusow owes was believed to be less than $2 million, while Barry Greenstein’s debt amounts to $400,000. The site goes on to report that these monies represent direct loans from Full Tilt to these players as tournament buy-ins as well as direct transfers to their online accounts for cash game play.

Even if Dayanim’s claims are true, approximately $15 million will barely make a dent in the $150 million owed to U.S. players, to say nothing of the hundreds of millions also owed to non-U.S. players. This poker blogger finds it strange that a relatively small amount of money is causing delays, and issues a call for players to begin getting their money back now! Chris Ferguson and Howard Lederer are the ones Dayanim should be setting his sights on if you ask us.

Based on Ivey’s recent success at the Aussie Millions, it appears as though he might be in better shape than the rest of the pros named to pay up on his debt. At least for him though there might be more than meets the eye to this story. Many readers recall how Ivey boycotted last year’s World Series of Poker in protest of Full Tilt not paying their players. At the time we applauded Ivey’s move, but all the details that have come to light over these intervening months simply leave us in a state of not knowing whether to believe him or not. In principle, Ivey is innocent of any wrongdoing here until proven otherwise, but his relative silence on the matter isn’t exactly endearing him to the poker playing public (or us). The same could also be said about Matusow, Lindgren, Benyamine and Flack, who we also haven’t heard much from in quite a while… I guess time will tell and eventually the whole truth will (hopefully) finally come out.

There’s a fascinating interview with Barry Greenstein that was published a couple days ago on PokerNews. Specifically interesting about Greenstein owing money is that he’s officially contract bound to PokerStars. In Greenstein’s interview, he expressly admits that he owes Full Tilt Poker $400,000 but says that he has purposely refrained from repaying the money until now and does not want to pay his debt back to the Tapie Group for fears that it would only benefit non-U.S. players. Cardplayer Lifestyle readers may recall that a deal was reached between the Tapie Group and the Department of Justice back in November of last year whereby the Department of Justice themselves assumed responsibility for reimbursing U.S. players, while the Tapie Group promised to pay back non-U.S. players.

Barry Greenstein has always been one of poker’s “good guys”. We feel that his honesty and straightforwardness about his involvements should be commended. Nobody questions his ability to pay back the money he owes and we don’t doubt that he surely has the best interests of U.S. players in mind by holding out thus far.