Phil Ivey has certainly taken a few lumps over the past year. From the Black Friday fallout and subsequent dissolution of Full Tilt Poker, of which he was a Team Member, to his well-documented divorce troubles, Ivey sure made plenty of headlines away from the felt. Despite everything going on in his life, however, one thing’s certain: his skills at the poker table have not eroded in the slightest. Ivey has reemerged in Australia as an unstoppable force at the felt and is on an absolute tear. After just missing the final table of the Aussie Millions $100,000 High Roller challenge just a few short days ago, he made a deep run in the Aussie Millions Main Event, finishing 12th out of 659 players, winning AUD 100,000. To top it all off, just last night Ivey powered his way to a win in the $250,000 Super High Roller, the richest event of the poker tournament series! 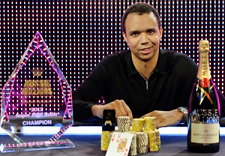 Along with a few well-heeled businessmen, Ivey took his seat along the biggest names in poker, including John Juanda, Gus Hansen, Jason Mercier, Patrik Antonus, Tom Dwan, Daniel Negreanu, and last year’s winner and runner up, Erik Seidel and Sam Trickett, respectively. Only 16 entrants meant that just 3 spots would pay. Dwan was the first to bust, while the rest of the pack were eliminated over the next few hours, leaving Negreanu, Ivey, Hansen, and Antonius to play for the win. Negreanu bubbled after his A 8 offsuit failed to improve against Antonius’ jacks. Hansen was next to fall, but at least collected AUD 800,000 for his efforts.

Ivey took a 2.2 million to 1.8 million chip lead into heads-up play against Antonius and locked up the victory in just about one hour. The Finn’s runner-up finish netted him a cool AUD 1.2 million, while Ivey walked away with his largest payday ever: a cool AUD 2,000,000!