Just when you thought Full Tilt Poker had nothing more to lose, here comes an absolutely shocking development: Preet Bahara of the Manhattan U.S. Attorney’s Office has amended the Department of Justice’s original money laundering complaint against Full Tilt Poker to allege that Howard Lederer, Chris Ferguson, and other co-owners of Full Tilt essentially defrauded players in a worldwide online Ponzi scheme! 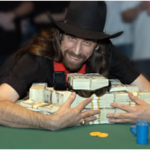 First they were shut down on Black Friday, losing their American players. Then, they lose their license and ability to operate anywhere else in the world. Now the poker world learns via a press release that Full Tilt Poker was one big lie all along?! Still reeling from the news and sitting slack-jawed as I write these words, this poker blogger is astounded by the brazenness with which the 2 dozen owners of Full Tilt Poker conducted their online operations. Though CEO Ray Bitar and poker pro Rafe Furst were also named in the amended prosecution complaint, the big fish with the most to lose are clearly Lederer and Ferguson.

The Professor Outsmarted… No Savior for Jesus…

Known to millions around the world as “The Professor” and “Jesus”, respectively, Lederer and Ferguson were among poker’s top names to become famous “brands” in the wake of the Moneymaker poker boom. Both are highly-decorated pros with multiple World Series of Poker bracelets, and Ferguson is a former WSOP Main Event Champion (2000). Clearly, the bigger they are, the harder they fall.

In the words of U.S. Attorney Bahara himself: “Full Tilt was not a legitimate poker company, but a global Ponzi scheme. Full Tilt insiders lined their own pockets with funds picked from the pockets of their most loyal customers while blithely lying to both players and the public alike about the safety and security of the money deposited … In total, approximately 23 individuals owned shares in Full Tilt Poker. The FTP Insider Defendants specifically owned the following approximate percentages of Tiltware LLC: Bitar (7.8%), Lederer (8.6%), Ferguson (19.2%), and Furst (2.6%). The FTP Insider Defendants were also, at all relevant times, members of the Board of Directors of Tiltware LLC, and Ferguson was Chairman of the Board of Directors.”

Some Very Disturbing Facts and Figures

According to the press release, Full Tilt Poker apparently owed $390 million to its players ($150 million to U.S. players) while only having $60 million on deposit in its accounts. The Ponzi scheme apparently took form when Full Tilt Poker credited players’ online poker accounts with money that had never actually been collected from them.

And here’s the kicker: During the most recent 4 years of it’s operations, Bitar, Lederer, Ferguson, Furst and the other board members were allocated a combined mind-boggling $440 million! Moreover, upwards of $10 million per month kept being paid to the company’s board members up until April 2011!!! So where’s the money? Apparently, in Swiss bank accounts and other overseas locations.

In addition to the original accusations of operating an unlawful gambling business, massive defrauding of the U.S. banking system, wire fraud, and money laundering, Full Tilt Poker is now also being charged with intentionally misleading its players to believe, through posts on reputable poker forums like 2+2, that all deposited monies were kept in secure, segregated accounts.

The amended complaint also contained details of internal emails sent by the Full Tilt Poker CEO directly acknowledging the financial distress the company was in and the danger of having this situation revealed.

Where Do Players Turn From Here?

Thankfully I never played even a single hand of online poker on Full Tilt, but I have lots of friends who had accounts there. Online grinders and poker pros, especially high rollers like Tom Dwan and Phil Galfond, had millions tied up in their FTP accounts. Canadians just filed a class action lawsuit against Full Tilt Poker, but now, more than ever, it appears that nobody will see their money again. I can only hope, for the sake of the players, that I’ll be proven wrong on this.

2 plus 2 has some great threads on this along with a funny take off of the Godfather Lederer is the Godfather Ive read some on these players over the years and surprised by this behaviour – thought these guys were tough stand up guys ( the poker players) at best they looked at it as debt they would be good for.