Last March, the new TV poker show Poker Night in America ran a $25/50 cash game at Maryland Live! in Baltimore. They held an open casting call to include a couple of amateurs who wanted to mix it up with the top pros. A poker fanatic, I applied for the “role” and was lucky enough to be selected. As Nolan Dalla put it in a blog post he wrote, it was like poker fantasy camp for me. 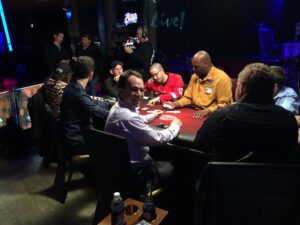 Me and the cast of Poker Night in America

The game was played in a TV studio-like setting, with lights and cameras all around. Walking into that game to play against a former World Series of Poker Main Event world champ (Greg Merson), a WSOP Main Event runner up (Steve Dannenmann), and poker heroes of mine like Matt Glantz, Jason Somerville, and Gavin Smith, was surreal.

The Privilege and Joy of Having My Own Rail

I notified my home game buddies about being selected to play in the big game and about 15 of them showed up to cheer me on. Even my wife, who is not very receptive to my obsession with poker, showed up, along with a couple of our neighbors. 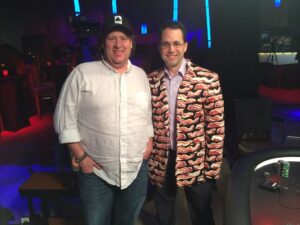 Gavin Smith, me, and the infamous bacon jacket

The support was unbelievable and, although outgunned by the poker pros, I felt like I had home field advantage. The rail was crowded with my friends who were chanting a home-grown cheer:  “Avi Avi Avi — Oy Vey Oy Vey Oy Vey”, and it really brought the house down. The other players teased me about my cheering section. When I folded a hand after Merson re-raised me, Gavin Smith said, “Avi, where are you friends now?!? Not cheering so much for that!” It was a riot. Matt Glantz told me that he wished all the players had cheering sections like I did.

From his vantage point behind me on the rail, one of my friends somehow saw all my hole cards and gave me advice between hands. Dannenmann yelled “no coaching from the rail”. He also trash talked me that my wife was hitting on him because he came in second in the Main Event. During the course of the evening, Dannenmann pronounced my name about seven different ways, none of them correct.

I don’t know if it was because I had so many friends there, along with my wife, or for some other reason, but I felt strangely calm and confident when play started. I bought in for $7,500, with another $7,500 in my pocket if I needed to re-buy. Holy crap! The most I’d ever bought in to a poker game for in the past was $800. Jumping from $2/5 to $25/50 is nuts, and the straddle was $100. A one hundred dollar straddle! I still can’t believe I played in that game.

How the Pros Stacked Up Against Me

Jason Somerville had a similar stack to mine, as did Greg Merson. Matt Glantz had a huge stack. An Internet pro named Scott, who works at PartyPoker, was shorter than me, and Dannenman was pretty deep. The other amateur, Robert, bought in for $10k. Gavin Smith had plenty of chips. He was drunk and outrageous. With Dannenmann on my right and Gavin two seats to my left, the chatter was non-stop and hilarious.

I expected a lot of straddling and 3-betting, but only Merson straddled every time and there was only slightly more 3-betting than in a regular $2/5 game. I was mostly card dead. I knew my image was super tight and I played very few hands. A couple of times I had suited connectors UTG and I folded them. One time I would have flopped trips and rivered a boat, but I never would have gotten there as there were two raises pre-flop and I was glad to have folded.

A Couple Hands and Highlights

Every time we got a new dealer, the players decided to do a run out. We each put in $300 and checked it down. Whoever had the best hand won. I wasn’t thrilled to do this, but I realized that an EV of 0 is actually better for me than most hands against this field. I showed my hands to the rail before I even looked at them. One time, I showed the hand and my friend Lori called out “You have a Lonnie” (otherwise known as 47, after my opponent of choice, Lonnie, whose favorite hand is 47). When the flop came 356, I almost jumped out of my chair. The pot had $2,400 in it. Of course, when I finally looked at my cards, I actually had 27, not 47, so I didn’t win that hand. I did, however, chop a run out one time with 83 when I hit the top end of a straight with my 8, as did Scott. So, I think I just about broke even on the run outs. Maybe lost one or two extra. 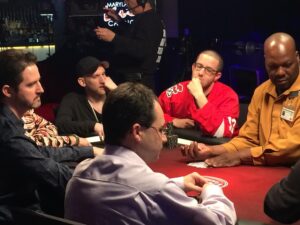 Holding my own(?) against the poker pros

It was such a thrill when, after winning a pot, my crowd went wild. On the other hand, I realized that I was definitely playing too tight in general and was thus not going to get much action.

Then again, this happened:

I raised pre-flop with KJo and Merson called me. I missed the flop and made a continuation bet, which he called. The turn gave me a gutshot. Merson checked. I fired another bullet, and he then check-raised me pretty big. I folded. When I thought about it later, I decided that I should have checked behind to see if I’d hit my gutshot, Q, or even a K. Why was I double barreling into a world champ?!

I didn’t really play in any big pots, but they all seemed huge to me. My biggest was this one: I was in the cutoff with AKs in spades. Merson had straddled for $100. It folds to me, and I make it $325. Jason Somerville in the BB calls and we go heads up to the flop. Flop comes with the J of spades and two low cards. Jason bets $700. I decided to float him, creating the biggest pot I’ve ever been in ($2,150), but it was smallish considering the blinds and the game I was in. The turn was the Qs, giving me a gutshot royal flush draw and two over cards. I was prepared to shove if Jason bet. He checked. I bet $2,000 (I said to myself, “did I just make a two thousand dollar bet?!?”). He folded right away. This hand put me well into the black. 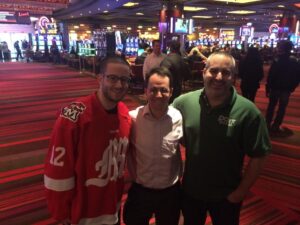 Me, Matt Glantz, and Greg Merson

Remaining on a Poker High After the Game

After the game broke up, I was interviewed on camera and also had some very nice chats with Nolan Dalla, the show’s Creative Director. Unfortunately, when the Maryland Live! episodes aired my session was not included, so I did not make it on TV. Yet, that does not diminish the experience one bit. Nolan told me that I’ll be invited back, and I’m looking forward to the challenge.

One thrilling outcome of my experience was that, when I played at the World Series a couple of months later, I ran into all of the pros I had played with in Maryland. They remembered me and I got to chat with them again. I even got to pitch my idea for securing online poker to them and to some other pros that they introduced me to.

What an experience. I remain starstruck!

Dr. Aviel D. Rubin is Professor of Computer Science, Technical Director of the Information Security Institute at Johns Hopkins University, and an avid student and player of poker. Rubin has testified before the U.S. House and Senate on multiple occasions and he is author of several books on computer security. In 2011, Dr. Rubin gave […]