Matt Glantz – The First Professional Poker Player I Ever Met

I’ve been in the poker industry for a while now. I founded this poker blog back in 2009. I’ve been playing poker since I was eight years old. I’ve visited and played in poker rooms around the world. I’ve been interviewed on multiple poker podcasts. I’ve written for one of the world’s top poker magazines. I’ve interviewed some of the biggest names in the business, including 2005 WSOP Main Event Champion Joe Hachem and even the great Phil Ivey. I’ve also co-created a note-taking app for live poker for Android and iOS mobile devices. But if you can believe it, despite all that poker and poker industry experience under my belt, I had never actually met a professional poker player in person until just recently. The fact of the matter is that I live in Israel; not exactly a poker hub (the thriving home game scene here notwithstanding). So you can imagine my excitement when, just a week and a half ago, I finally got to shake hands with a real, live poker pro. Looking back, I don’t think I could’ve possibly encountered any poker player more professional than the man I got to meet: all-around poker good guy and Parx poker room ambassador Matt Glantz. 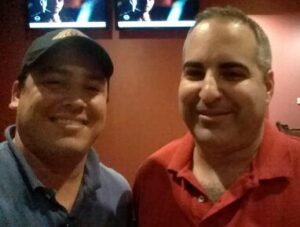 A Surreal Experience… From the Rail

When a floorperson informed me that Matt had arrived, I immediately made my way to the table at which he was playing. Not wanting to disturb him while he was in the middle of a session, I found a spot on the rail where I took in the (to me) surreal scene of Matt and two other players butting heads at $300/$600 Super Stud. Part and parcel of never having met a professional poker player before is never having seen poker being played at astronomically high limits. Eyeballing the stacks, let me tell you that it was beyond incredible to actually witness the two other players having stacks of approximately $5,000 apiece in front of them while Matt had them both covered – and then some – with his monster stack of about $25,000. Even more astounding? The three of them were laughing and joking around, tossing chips in as though they were playing $1/$2, or in a home game! Now I obviously know this sort of thing happens all the time, every day, in high-limit games all over the world, but to witness it in person for the first time is just sensational.

…and THIS Is What Makes Matt Glantz Special

Apparently taking note of my shy hesitation to go over and introduce myself, the floorperson politely tapped Matt on the shoulder and indicated to him that I was watching intently on the rail. Matt couldn’t have reacted in a more friendly fashion. He waved me over with a smile and invited me to sit next to him for a bit and schmooze while he played. I’m not going to kowtow here, and I apologize if it seems fanboyish, but the simple fact is that at this point I was jumping out of my skin that “this is really happening“! 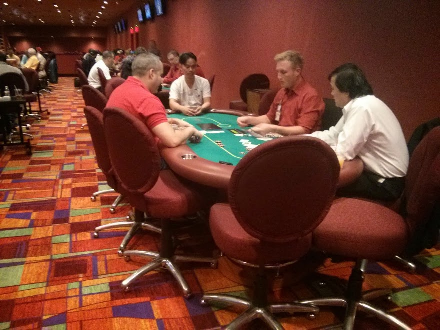 Immediately, and over the next five minutes we sat together, it became crystal clear to me why Matt Glantz is so highly regarded as a pro’s pro and thought to be one of poker’s top ambassadors. I was completely disarmed at how down to earth Matt was. For a man who has won millions, traveled the world, and who sits comfortably among his peers in the top tier of his chosen profession, that’s saying a hell of a lot. The first question I asked him was how often he came to play at the Parx. When he answered “twice a week, usually on Tuesdays and Fridays” my immediate follow-up was “what do you do the rest of the time?” His answer warmed my heart. He said “just be a dad.” As a proud father myself, I immediately felt a connection with him. Family first. Always! Over the next few minutes, we basically chatted not about poker, but about our kids. He mentioned that he wouldn’t be at the WSOP full-time, but that he’d be flying back to Philadelphia a couple times during the series to spend quality time with his family. At least in my eyes THAT’s a professional poker player.

Obviously, as both a local and global poker ambassador, Matt is used to fans coming up to him to say hi, but the fact is that he was 100% genuine and cordial throughout our encounter. It didn’t seem to bother him one bit to be interrupted while playing. He was kind enough to pose for a picture with me and, after he graciously agreed to do a proper interview for this site in the future, we parted ways.

So that’s it. I can’t say “I’ve never met a poker pro” anymore. Thanks Matt for making this poker fan feel like a million bucks. Best of luck to you at the WSOP – I’ll be rooting hard for you to finally win that bracelet you so completely deserve, specifically at the $50K event! That’ll be something really awesome to talk about during our interview 🙂