Welcome back to the Great American Poker Trip. My name is Jack Laskey and I’m a co-host of the Just Hands Poker Podcast. My partner in podcasting and other degeneracy, Zach Resnick, and I started in Washington D.C. and have slowly made our way towards California on a poker-fueled road trip. Along the way I’ve been taking some time to reflect on the trip highlights and the poker scene across the United States. Last week we were in Vegas, and now we are in our ninth stop, California’s Coachella Valley.

The obvious poker destination heading west from Las Vegas is LA, and don’t worry, we’re getting there – that’s the final stop on our road trip. But for Zach, our friend Jon, and myself, a detour to play in a legendary game was necessary.

OK, “legendary” might be an overstatement. This game obviously doesn’t have the celebrities of a Molly’s Game or the nose-bleed stakes of Bobby’s Room (thankfully so, since we would have been out-priced and out-classed in either of those environments). Rather, the legend brewing at the Agua Caliente casino in Rancho Mirage, CA was that of a semi-private mid-stakes PLO/PLO8 game of the juiciest caliber. 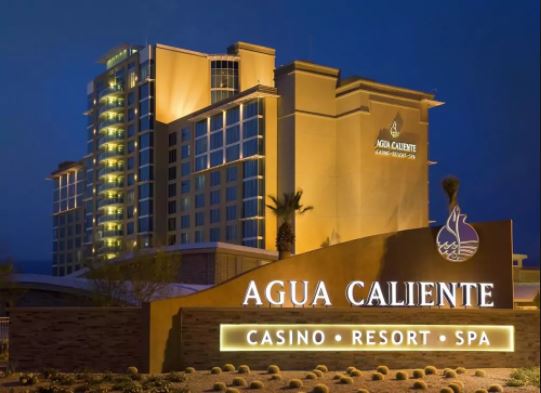 Zach, as had others before him, stumbled upon this game by chance while attending his grandfather’s 90th birthday party about 10 minutes down the road. He checked the Bravo Poker Live app and saw a peculiar selection of games: a few $1/$2 NLH tables and one $5/$10 PLO/PLO8 table. Intrigued, he made the short journey and discovered something of an El Dorado for the mid-stakes pro.

This was the game any self-respecting PLO player would dream of. Loose players with deep pockets and strategic ignorance to match. Typically, many great games are formed around one or two whales. This was a game formed around one or two competent players with the whales making up the majority of the field. But poker, even great poker, is still a game of chance. Zach, in his one chance to fill his bag with this mythic gold, was robbed losing a $10k pot where he got his money in as a 5:1 favorite. Naturally, he was anxious to return, and Jon and I were eager to join him.

Along our road trip, we prepared for the game, studying PLO and PLO8 during long car rides through the South. We called friends, coaches, and anyone else we could think of to add to our already substantial edge. Worryingly, however, the game was rarely appearing on Bravo, maybe once a week. Was our detour going to be worth it? After weeks on the road and long sessions in Vegas, we considered skipping the Agua Caliente altogether to head straight for LA where we’d have beautiful weather and lots of things to do outside of playing poker. Ultimately, Zach’s commitment to see his grandfather was the deciding factor.

After an initial trip to the casino, we concluded that the game that had brought us across the country would be running once during our three-day stay. We arrived ready to play as soon as the game popped up on Bravo, but found a full game. We placed our names on this list and sat at a $1/$2 table to bide our time. The $1/$2 felt like an extremely sharp contrast to the promise of great action on the horizon. Adding to the strange feeling of sitting in this $1/$2 game were the chips. For whatever reason, the largest chip in play at these tables was a brown $2 chip. My $200 max buy-in was given to me as a full rack of brown chips. It was quite discomforting in the interim, but eventually seats opened up, first for Zach and then for myself, and it became clear that we had been delivered to the promised land. 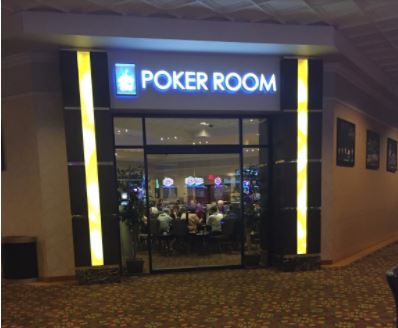 The browns were turned to reds ($5 chips), greens ($25 chips), blacks ($100 chips) and purples ($500 chips) and the retired $1/$2 squatters were turned into delirious gamblers frenzied by the amount of money on the table. Moods swung violently as chips flew across the table, turning great friends into bitter adversaries and back again. Zach and I sat back, somewhat apart from the rest of the tumult, simply accumulating what we could along the way. A game of this nature promotes tight play as an effective counter-strategy, thus much of one’s time is dedicated to observation and taking notes.

By the time I had arrived, Zach had built up a stack and was playing some serious post-flop poker. I decided to short-stack the game to limit variance and was committing as much of my stack pre-flop with premium holdings as I possibly could. The strategy proved successful in the sense that I got all-in several times pre-flop with aces, but was less successful in terms of winning once I had put myself in such an advantageous position. A whale nicknamed “Magic” (for his propensity to dispel such odds) was the chief beneficiary of my misfortune.

Eventually, with Zach a few buy-ins ahead and myself a few bullets in, the fish grew tired of putting more money on the table. Perhaps feeling like a positive day was becoming out of reach, they punted off whatever was left and took their leave. At a certain point, with Zach coming out way ahead and me having successfully climbed out of the hole, the game organizers announced the conclusion of the evening and we took our leave. 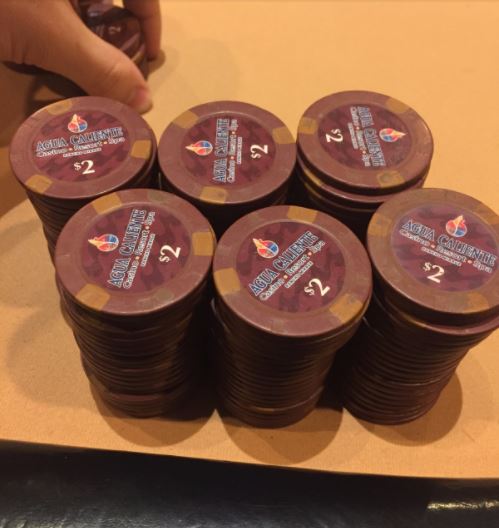 In many ways this room felt a lot like Florida. The lower-stakes games felt like daytime activity for retirees while the higher-stakes games had a totally different feel. This room was particularly heavy on the daytime activity vibe. There was heavy participation in room contests relating to the current NBA playoffs. Many local events were advertised on the walls and attendance was discussed at the $1/$2 table. Also, it was the brightest poker room I’ve ever played in.

The PLO game had a much more exploitative feeling. There was a camaraderie among the game organizers (who were the more competent players) and the fish, but there was still an understanding of where the money was flowing. Rather than the somewhat delusional sense of equal competition historically skewed by variance that often arises in these settings, there was more of a acceptance around the transactional nature of this gambling. That, however, did not halt the excitement surrounding individual hands.

Overall, my experience in many other games along the trip was a lot more fun. Most other games are used to outsiders and are much less used to the exact same set of faces time after time. I felt most like an outsider by far at this casino. It was totally worth it.

$1/$2 NLHE could easily be the biggest game in the room at any time. While some $2/$5 got off in our time there, it was not a constant in the room. The PLO/PLO8 game is a great draw, but it’s too big of a game for most and it doesn’t always run.

I’m normally the youngest at the table, but not normally by 30 years! For me, the atmosphere was quite dull outside of the PLO game, where the level of action kept a high-floor in terms of engagement.

There was a soft drink station, which is great for someone who like me who drinks a lot of water but doesn’t like to go through 10 plastic bottles in a session. The food was fine, although they messed up Zach’s order in a way that was particularly devastating to him… I won’t get into the specifics here.

The Coachella Valley is really beautiful, but it is not convenient to get to. I suppose a great game has to have some barrier to entry, and being tucked away in a snoozy California town helps.

As I explained above, the main attraction of Agua Caliente as a poker destination is the very special and lucrative semi-private PLO/PLO8 game. Much like the mythical El Dorado, it’s likely the rare few players who can claim to have had the privilege of experiencing said game. For the rest of the poker travelers coming upon the Agua Caliente poker room, there’s always the standard $1/$2 games you can find pretty much anywhere else on the map. But for the lucky few passersby who time things right, the California Gold Rush is still on.