You Have To Play To Win

One big regret that many people have later on in life is that they were too afraid of dreaming big and taking risks to achieve their aspirations. After risking it all in the pursuit of his dream to become a WSOP Dealer, Ryan Sackett can now reflect on his own journey from dream to reality. 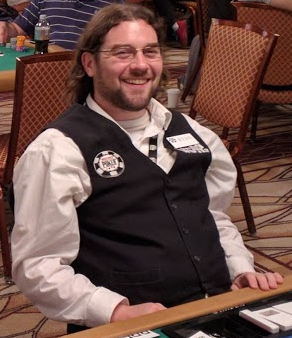 Ryan was always a very likable guy, so it comes as no surprise that after “playing several hours of poker at the Northern Lights Casino in Walker, Minnesota” he became friends with the dealers.

“After getting to know several of the poker dealers, I eventually started asking about dealing myself. It seemed like a good way to make money and stay around the game that I loved,” Ryan said.

For most people, that would have been the end of the story. A dream is born, a passion, a calling; a drive only to be thrown into park and remain a reverie because we dread the possibility of failure. There are so few of us who resist the urge to slam the brakes on the dream machine and throw it into park. Those few brave individuals who ignore their apprehension and instead press the throttle to the floor and hit top gear are inspirations to us all! Ryan Sackett is one such man.

Ryan explains his early card dealing role as follows: “It was very hard to get into the Northern Lights poker room, although they did let me deal tournaments when larger ones came in town (MSPT then Minnesota State Poker Tour, HPT, etc.). I also traveled to other casinos in Minnesota, for the same larger tournaments for extra help.”

I imagine being a dealer in the Midwest isn’t really living the dream, that’s just a job. No, this trip can’t stop until Vegas! 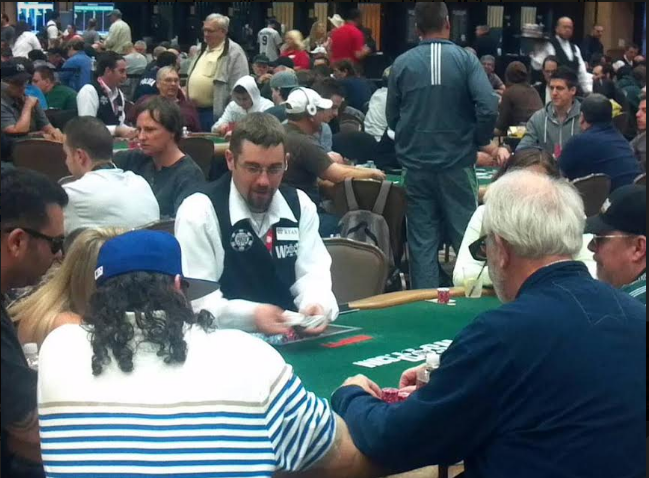 “I was on vacation… I was about 24. I had always dreamed of hitting up and frequenting Vegas, ever since the poker boom. My first time was a bit of a sensory overload,” Ryan says of his first time in Vegas. “I had already wanted to go there on a long term basis, that trip cemented me wanting to move out here.”

This is where the rubber meets the road, Vegas or bust. Most folks would have run out of gas at this point letting their dream sputter. Ryan is not most folks. He withdrew his savings and headed out to Vegas with a one-way ticket!

“I moved out here with a suitcase of clothes, a backpack, and a little over $6k in cash. Life was a huge struggle, when I pissed away my Vegas fund in September of 2010. That’s when I first moved here. After I blew through my moving-out-to-Vegas money, in about three months, a newly acquainted friend got me a job where he was working at the time, in a call center,” Ryan laments. I had a pretty tough year-and-a-half or so before I was dealing the WSOP. I had some crap jobs just to survive.”

Auditioning for a Dream Role

In the summer of 2012, after working at the call center for a couple years, Ryan took several weeks off to deal at the WSOP, but first he had to get through the grueling audition process.

“I heard I could apply for the dealing job at the WSOP on the Caesars website. I applied, and about a month later I got a call asking me if I was still interested in dealing the 2012 WSOP. I of course said yes, and he gave me an audition date which, if I remember correctly, was April 9th of 2012. The audition process is nerve racking, because there are 9 other dealers at the table as well as the person observing you. The observer names a game, and you deal it,” Ryan says.

“I have to admit, I wasn’t familiar with all the games that were dealt. So I did as much research as I could on the games I didn’t know, but you still have to know proper mechanics of different games. I was about the fifth or sixth dealer of the audition. So, I got to watch others. If I wasn’t sure about the game, I’d watch to see what looked proper, and repeat what they did. The guy giving the audition asked me to deal PLO, and that’s where I freaked out a bit. That game is all about math, playing, and dealing. I dealt three or four different games. I think it was one hand of NLH, one hand of stud 8, one hand of PLO, and one hand of deuce to seven triple draw. He told us we would know if we got the job after everyone auditioned. He’d have a one-on-one with everyone and tell us if we passed, or not. Turns out he passed everyone I auditioned with and told us as a group.”

Alright, we make it through the finish line, we win, dream come true! Well… hold on there. A race isn’t won simply by making it through the qualifying round!

Ryan goes on to describe how some of the dealers, after successfully making it through the auditions, buckle after the cameras and lights come on; after the big name poker pros have a seat and things get real! He said there were a few people who got up and left the table crying from the pressure. Ryan also had to overcome his first day jitters as well.

“The experience was surreal. I was so nervous pitching my first few hands. I was sweating after each down,” Ryan said. “I have dealt 5 WSOPs. I don’t get nervous dealing to big pros any longer. I get a bit nervous when I’m dealing in the spotlight, when I know many people are or could potentially be watching.” 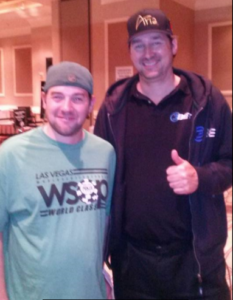 He wasn’t out of the woods just yet. The WSOP only goes on for 7 weeks. After that first WSOP, Ryan went back to his “crap job”.

Forced to Pursue His Love of Dealing

“I didn’t start dealing full time until I got fired from my crap job, in the spring/summer of 2013, which was a blessing in disguise,” Ryan said. “I had nothing else to fall back on.  I started getting more connections in the poker scene, found out some gigs around, and found out who was hiring for these gigs. My breakout WSOP was in 2013. I actually got a good amount of ESPN time, that year.”

That’s it. He crosses the line, takes the checkered flag and starts his victory lap! You never work a day in your life if you love what you do. Ryan now travels all over the country as an independent contractor doing what he loves mingling with the biggest names in poker.

Ryan’s story should be an inspiration to us all. If you don’t think you can do something, you’re right. Still, if you think that you can, you’re also right. I encourage you to go after it, chase your dreams and don’t stop until they are realized.