Who among us hasn’t fantasized about winning a prestigious poker tournament? Show me a group of home game players that hasn’t at some point in time spoken about what it would be like to head to the casino together, play in a big tournament, and hopefully all meet at the final table.

For recreational players, the thought of making a deep run, outlasting big names in the field, and being cheered on all the while by friends and family is the stuff of daydreams. Aside from the November Nine, however, or instances where a tournament is being played in a big city that you and your close circle happen to call home, it’s relatively rare to have in-person support. More often than not, your rail will be virtual. That’s especially true if you and your poker playing buddies live in another country halfway around the world.

Nonetheless, thanks to modern technology, a virtual rail can be incredibly exciting for everyone involved. Case in point: my good friend Amnon Eisner, who played his heart out last night at the 2017 Philadelphia Poker Classic Main Event while the rest of us from his home game sat captivated by what was unfolding right before our eyes…via WhatsApp… way out here in Israel.

About Our Home Game

There are about a dozen of us in our home game group. We’ve known each other for years and our friendship extends well beyond the poker table. Most of us live in the same small town, while others drive in when we organize a game. We usually manage to get a game together once or twice a month, and we play for small stakes; approximately the equivalent of $0.25/$0.50. The typical win/loss for our game is between $50–$75, with the occasional “big night” meaning that someone will walk away with $250–$300 in profit.

Living in a country where there are no live poker rooms, any time one of us travels abroad and plays some poker, the rest of us de facto become that guy’s cheering section, regardless of whether he’s playing in $1/$2 cash games or one of the ubiquitous daily tournaments that most casinos run.

It goes without saying that for any of us to enter a $500 buy-in tournament is a pretty big deal.

It All Started with a Picture

Around 8am Israel Time, Amnon posted a picture to our group – he was at the SugarHouse Casino and had decided to enter the Philadelphia Poker Classic. By the end of his Day 1 play, he had managed to run up a big stack. 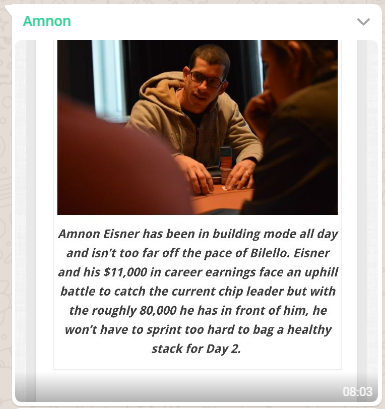 From that moment, we were all on watch and Matt Clark’s reporting via the SugarHouse Poker Blog instantly became must-read material for us.

While Amnon slept, the rest of us went about our day jobs and continued with our regular daily activities. By early evening, we were all set to rejoin Amnon on his virtual rail. As action was about to begin at the tables, he didn’t disappoint, grabbing our attention with a picture that I couldn’t help but share on Twitter:

Shoutout to my buddy Amnon playing in Day 2 of @sugarhousepoker #PhiladelphiaPokerClassic. He’s the one that you probably DON’T recognize. pic.twitter.com/aOgd9c8sjj

Indeed, while 8,000+ people were tuning in to the Cate Hall vs. Mike Dentale grudge match, our little home game group was on the edge of their seats, following along as Amnon updated us on big hands he played in throughout the night.

Over the next 30 minutes, Amnon went on a heater: 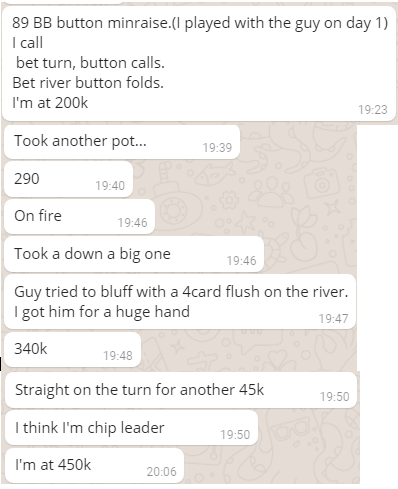 Soon thereafter, we were informed on the blog that none other than the great Phil Hellmuth had sat down to play:

The one and only Phil Hellmuth is in the Day 2 field of the Philadelphia Poker Classic Main Event. pic.twitter.com/7c6VVwNqmn

Playing in the same tournament as any Poker Hall of Famer is surely a memory any poker fan would cherish. Within a few minutes, however, we had an “insider” Phil update from Amnon… and some fun talking about it; the typical type of banter we always have on our WhatsApp group: 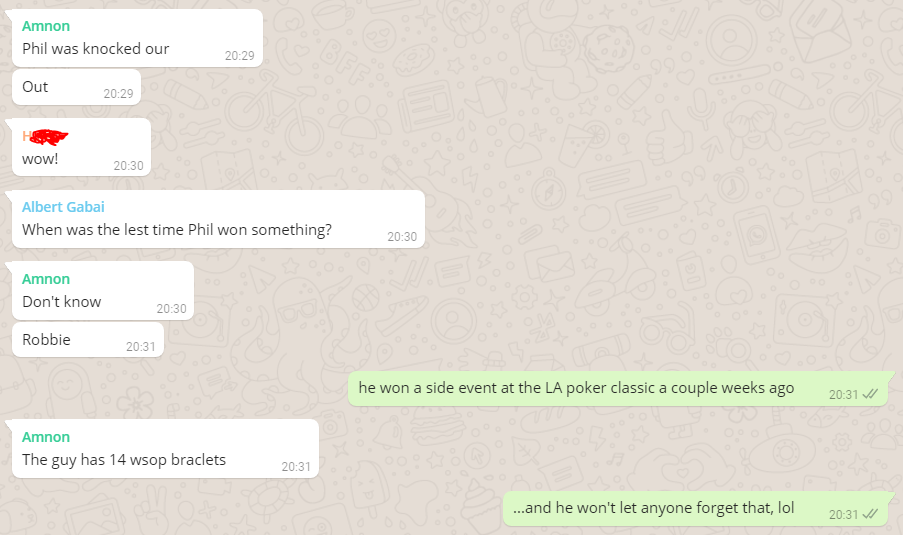 A couple hours into our virtual rail session, it only made sense to change the name of our group:

As play progressed, with Amnon not only still alive in the tournament, but chipping up nicely and staying near the top of the leaderboard, we all realized that the sweat was real. While nobody wanted to jinx the run, we couldn’t help thinking that:

As the night progressed, we got additional updates from Amnon: Matt Glantz had joined the table. Then, a few minutes later, Matt got eliminated. Play was down to hand-for-hand. Our boy was outlasting the big name pros, and he had made it into the money!

But wait… there was more: Amnon became the first to cross the 1 million chip threshold. 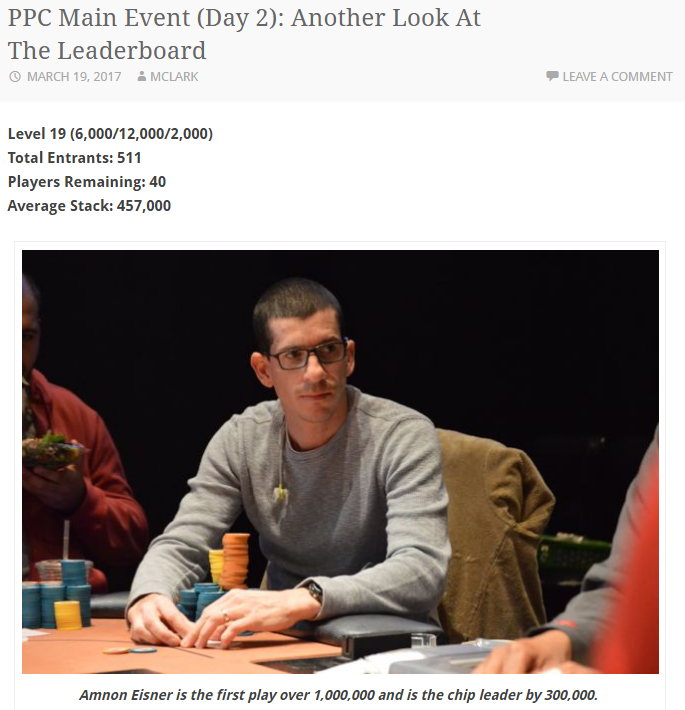 As play continued, excited as we were back home, the hour grew late and we started nodding off. After all, we had work to get up for in the morning. 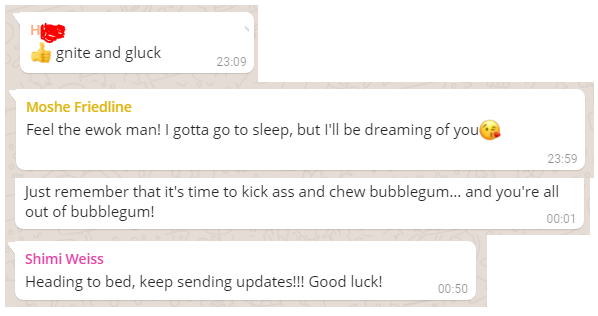 I’m pretty sure I was the last one left on the virtual rail, heading to bed at about 2am. Before my head hit the pillow, though, I Tweeted this out:

…but the way he’s playing, you may just start recognizing him by the end of the tournament! Go Amnon! Make proud! Rooting for you dude! https://t.co/JVqok5sMlU

One by one we woke up here in Israel, and I can only imagine that, like me, everyone else in the group had huge smiles on their faces while scrolling through Amnon’s updates as he continued powering through the tournament. 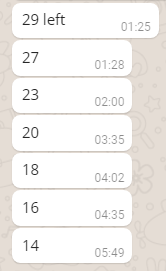 We also had an awesome official update to check out from the SugarHouse Poker Blog: 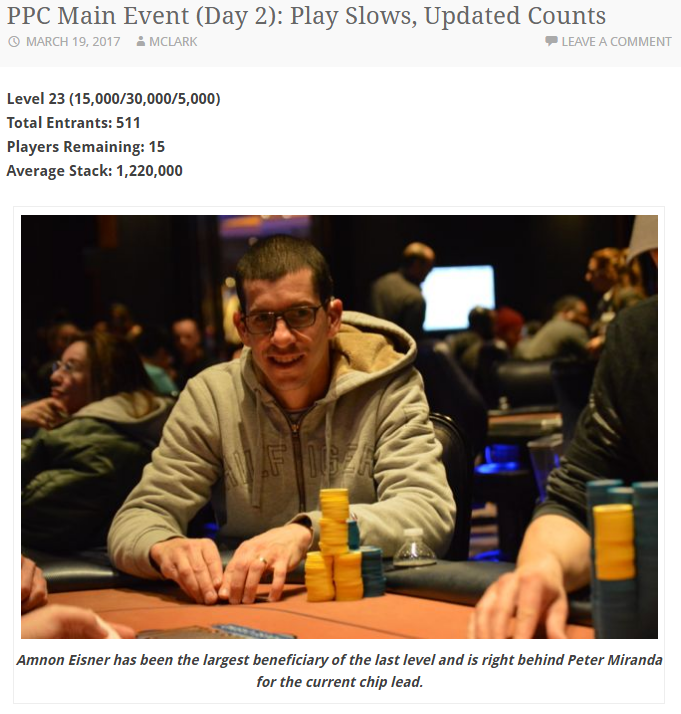 Once again, we were hooked: 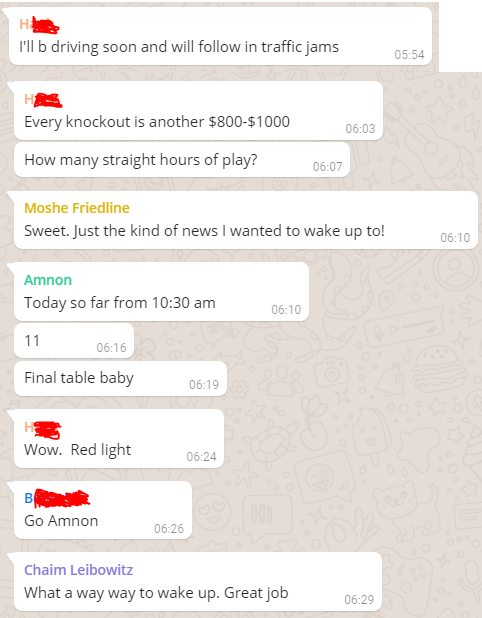 At that point, while dressing my kids for school, the idea for this story came to me. While busy making their sandwiches, I knew that no matter how Amnon would end up finishing in the tournament, the story of the virtual rail had to be told. Surely, tons of other recreational poker players and home game aficionados out there can identify with and understand the excitement we all felt for our friend. We might have physically been thousands of miles away, but while firmly ensconced in our morning routines our minds were on what was transpiring in far off Philadelphia. In our hearts, we were right there with Amnon.

A Winner, Even Without the Picture to Prove It

I would have loved to end off this post with a picture of Amnon in the winner’s circle – you all know the kind; a beautifully arranged chip stack, his hole cards carefully placed at or near the top. Maybe he’d be giving the thumbs up sign, or holding the winner’s trophy… but, alas, victory eluded our home game hero. 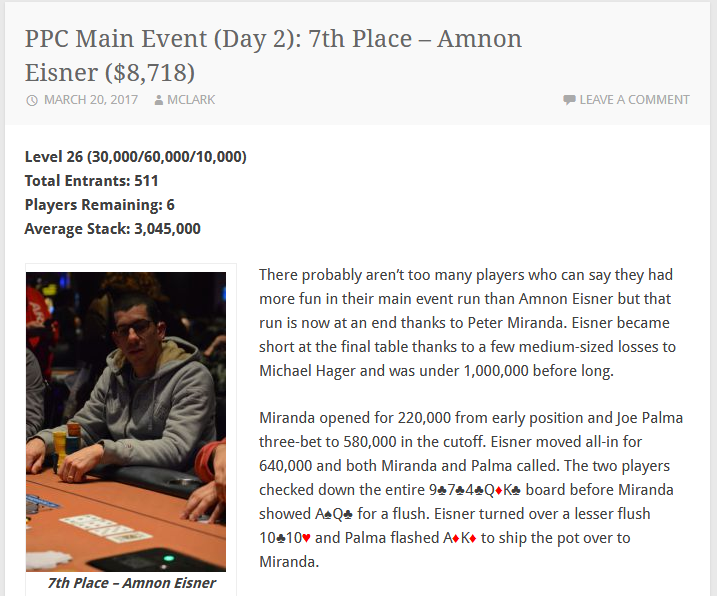 Had we been there in person, I’d probably say that “the air was sucked out of the room”. We were, indeed, standing united, but only via a WhatsApp group, in the virtual realm. Still, in what could be deemed a related metaphor, we all felt that we had had the wind knocked out of our sails.

After hearing about the hand from Amnon’s perspective and collectively groaning at the outcome, we rallied to salute him one more time. Reaching the final table, cashing for almost $9,000…. By our standards, that’s just…

There was just one specific thing that had been nagging at me the entire time while I was railing the action. I didn’t want to disturb Amnon with it while he was playing, but now that his run had concluded I just HAD to know.

As he was leaving the casino and heading out on the road, I called him up and asked the question that had been bugging me: How could he possibly have been concentrating on all the poker action taking place at the table while simultaneously and constantly updating us the entire time on WhatsApp? Wasn’t he worried about missing some action or perhaps not catching an opponent’s tell because he was looking down at his phone so often?

His answer was pretty awesome:

“It was actually exactly the opposite. You guys helped keep me focused and all of the talk in the group prevented me from doing stupid things and making mistakes.”

Go figure… maybe each of us should ask for a percentage 🙂

I have no doubt that Amnon will be more than happy to come back to our little home game, and that he certainly will be welcomed warmly. After all, we might be a bunch of “small time poker players”, but for one glorious 24-hour period on the virtual rail, we all got to experience the dream. 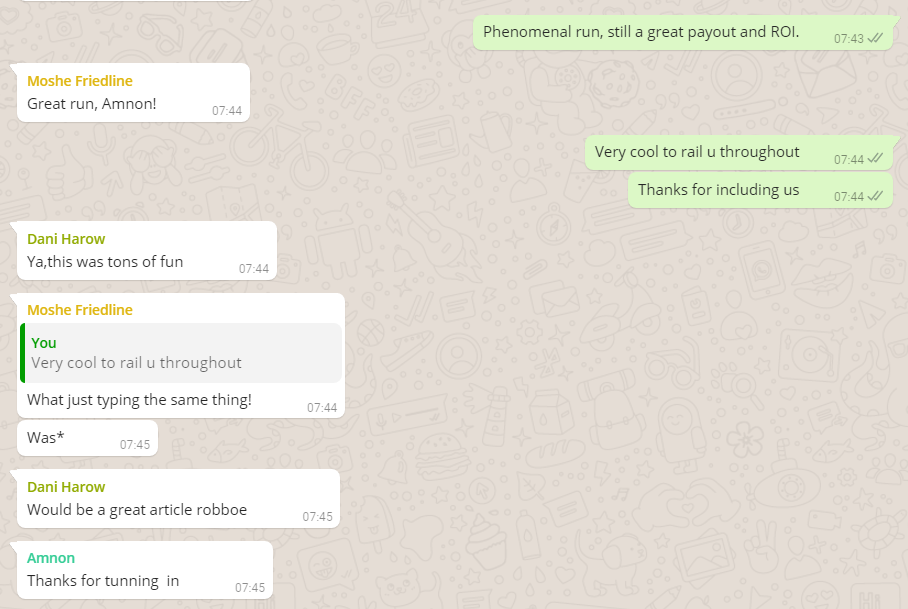 Great article, Robbie! It was definitely fun to run up the leaderboard with you guys!

Fantastic storytelling Robbie, thanks for sharing. And outstanding performance from Amnon, taking the team with him all the way. Real friendship and generosity to go with his poker smarts.

Thanks so much for the kind words 🙂