This is the final installment in my three-part series about live poker in London. In my last two columns (see Part 1 here and Part 2 here) I wrote about three of the major poker rooms in London: Aspers, Hippodrome, and The Empire. In this, the last of the three-part series, I’ll address the remaining major casino: “The Vic”, as well as the four minor casinos: The Grosvenor at Leicester Square, The Genting Mint at Cromwell, The Palm Beach, and the Horseshoe.

Of course, if you’re not planning on heading to London anytime soon, you can join a leading UK online casino.

“The Vic” is London’s longest-standing poker room. It’s official name is the more cumbersome, “The Poker Room at the Victoria Grosvenor Casino”. It’s located at 150 Edgware Road, up near Paddington Station on the east side of the city. There are 30 tables here, making it London’s second-largest poker room in size to the Aspers — though the poker room itself is physically larger, with much more space between the tables. 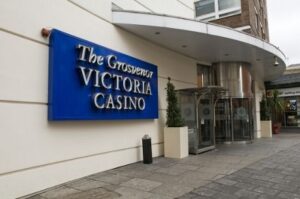 This is a 24/7 room, with as many as 14 or so cash games going at one time, the remainder of the tables often taken up by a tournament. They nearly always have either a £1/2 or £1/1 game — both of which were going on each of the three times I visited the room. They also had a £2/5 game going on the Wednesday evening I played in their 7 pm tournament. They get larger games as well, with £5/5 and £10/25 spread in their slightly elevated high-limit section. The rake is what it is in the other London rooms, 10% up to £5 in the lowest limit games, 5% up to a £10 max in the larger games, and a time charge for the biggest games. Their £10/25 game is raked at £13 pounds from each player for each 30 minutes of play

There are no player comps to speak of. The regular freeroll tournament is funded by a £1 drop from every pot of £20 or larger. There’s a reasonably priced poker menu with table-side drink and food service. They do make one accommodation to the players in the bigger game — as they will “run it twice” in the £2/5 or higher games, at the players’ option. I met a couple of guys who make their living here; though the lowest stakes games that I was in were fairly tame and beatable. The £57 tournament I played in seemed about as soft as the lowest stakes tournaments I’ve played in elsewhere (though I busted out fairly early and did not re-enter).

Of all of the six casinos I played in, the Vic seemed the most comfortable for the serious, regular player — though I actually preferred the atmosphere of one of the smaller casinos, The Mint. I got the impression that the most serious veteran players made The Vic their poker home — if only because there were fairly large stakes regularly available here — and they had been coming here before there were any other options. 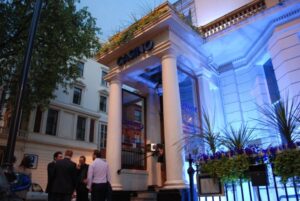 Unique to this room, as far as I know, is a version of dealer’s choice. The game is limited to PLO, but each button chooses whether it is the 4-, 5-, or 6-card variety of the game (assuming there are enough cards to sustain each game).

There’s a small bar in the room; and an extremely inexpensive restaurant downstairs, offering a buffet or a la carte items — with table-side beverage and food service. I found the place to be extremely hospitable, warm, and friendly — and the players more interested in having a good time than extracting a profit. I would make this my regular room if I lived in London; and I’ll gladly go back the next time I’m in town.

There is a single table on the gaming floor of the Grosvenor Casino in Leicester Square. I visited there on a Tuesday night at about 10:30 pm, after I had seen a show. They open precisely at 7:30 pm, and spread £1/1 no limit with a 10% £5 max rake. Compared to the other poker rooms, this place is kind of a dump, but it’s also clearly the softest game in town — the place where players with the least poker experience come to gamble it up for a few hours of leisure. Stacks may be relatively short — with a £40 minimum and £200 maximum buy-in; and the rake may be unbeatable, but you’ll definitely have the best chance here of being the best player at the table. Just don’t expect any freebies or amenities.

There are two other regular poker rooms in London: The Palm Beach and the Golden Horseshoe. I did not visit either of them, but I learned something about each. The Palm Beach, located on 30 Berkeley Street in the Mayfair section of London, opens at 7:00 pm and regularly spreads the very biggest games in London, from £5/10 to £25/50. It is generally known as an extremely classy club. Unlike all of the other live poker rooms in London, the Palm Beach Casino states that they require formal attire and membership 24 hours prior to being allowed to enter the casino floor.

The Golden Horseshoe, located in the Baywater section of London, is known as a very friendly, low-stakes, and casual place, with a regular £1/2 game.

I played at the Victoria once and I raised
with two kings a gentleman retained he must
have had two aces I passed and left the building.
Jack

Nice story 🙂 Hope I get to play at the Vic some day as well!

Thanks for the kind words, Michael, and for checking the articles out – we appreciate it!