Poker Journeys: The Dream of Becoming a Poker Writer

Just a little over a year ago, my girlfriend and I were texting each other about dream jobs.

Her dream, once upon a time, was to work in sports media, which she did for a while before finding her current and very fulfilling career path.

I didn’t have to think too hard about what my dream job would be; traveling around the world and crushing high roller poker tournaments for millions of dollars. Aside from that though, there’s no doubt; writing about poker is my dream job. 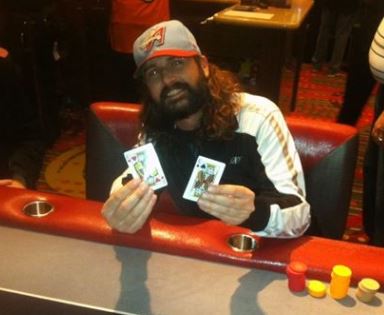 I dabbled in poker writing a little bit as a tournament reporter at the World Series of Poker in 2009 and 2010, and I was conversing with my girlfriend about that gig. We both came to the conclusion that it was time for me to start looking for freelance work in the poker media realm.

If you’ve ever tried to break into a particular niche of freelance writing, you know how much work goes into finding potential outlets to work for.

I started visiting every poker news site I think of, combing their websites to find out if any of them were looking for contributors. One of the first sites I came across was the Cardplayer Lifestyle Poker Blog, and much to my excitement I found this: 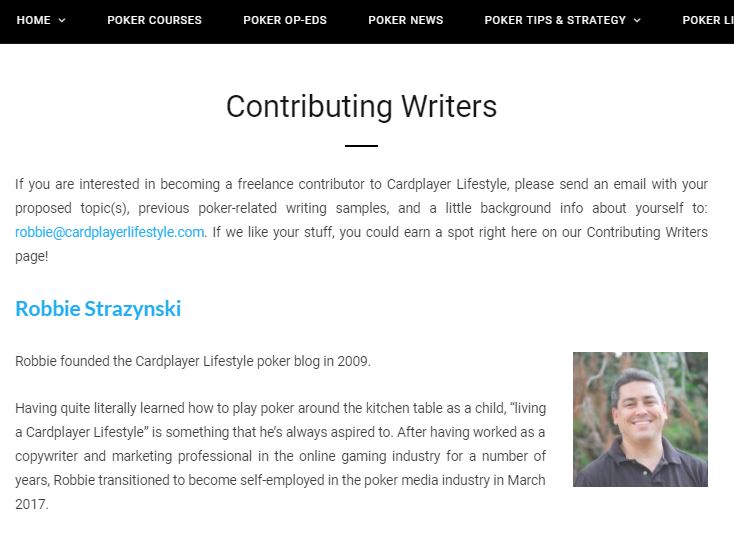 I emailed Robbie and pitched a couple of stories, introducing myself as someone who was pursuing their dream career in poker media. Much to my surprise and delight, Robbie responded within 24 hours and approved one of the pitches!

He informed me that if that article went well, it could potentially turn into a monthly gig for me. I had just started playing poker again around that time, after taking three-year break, so my first poker article in eight years was a story about the thrill of playing again after taking time off.

The thrill of having an article published was even greater. I started spending a lot of time watching the WSOP from past years, the WPT, YouTube videos, and anything else I could find related to poker.

I wanted to always have several story ideas ready for my monthly Cardplayer Lifestyle article, which I feel blessed to still be doing 13 months later! I also just wanted to soak in as much knowledge about the modern poker landscape as I could, while looking to go further in this poker writing pursuit.

Getting Back in the Game

I was also spending as much time as possible playing poker at that point. I was a Sit & Go specialist back in the day, but this time around I wanted to learn how to play cash games, something I had very little experience with.

If you’ve ever tried to transition to cash games from a tournament background, you know these are two different worlds. Dipping my toes back in the water, I signed up at Replay Poker as well as a couple other sites. After a nice start at the online microstakes, I started losing, decisively, and knew it was time to step up my study game away from the table.

Somewhere along the way, I came across this motivational speech from Doug Polk:

As it so happens, Doug Polk is one of the co-founders of Upswing Poker, a poker training site with an extensive library of learning materials. I signed up for the Upswing Poker Lab and started really trying to understand what it takes to be a winning player.

I was still looking for writing opportunities at the time as well, Googling things like “poker writing jobs”, sending cold emails to poker media outlets, and combing freelance job boards like Upwork every day, just to make sure I didn’t miss out on any potential opportunities.

During this search, I came across this Reddit thread from 2017: 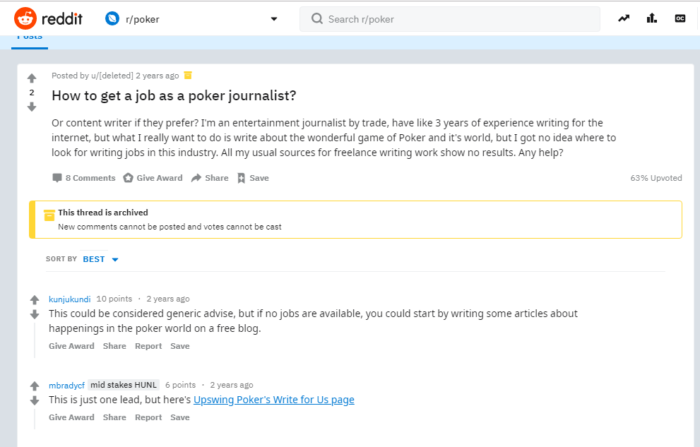 I had spent a good amount of time on Upswing, and that lead at the bottom of this screenshot was a potentially exciting opportunity. I sent in an application, and a few weeks later starting contributing.

So at this point I’m writing at least 3-4 articles a month total, for Cardplayer Lifestyle and Upswing Poker. I’m well aware of just about every other poker media outlet in existence, as I’ve contacted them all at this point.

I’m working out at the gym one day in early 2019, and in between sets I’m scanning Twitter.

Lance Bradley from PocketFives had tweeted that he was looking for U.S.-based poker writers and to DM him if interested. I finished up a set of shoulder presses and immediately went home, cutting the workout short. I needed to apply for that spot ASAP.

I came home and contacted Lance, and found out that he was looking for a writer to cover U.S. online poker legislation. As an avid online player, this topic is of great interest to me, and for the past few months I’ve had the opportunity to contribute to PocketFives, covering some of the developments as they happen in Pennsylvania and West Virginia, the two most recent U.S. states to legalize online poker.

So, at the one-year point of this journey, I’m now contributing to three great poker websites and spending much of my free time writing about poker. Between the poker writing duties and my other gig, which is working in the craft beer industry here in San Diego, life is good!

Getting up in the morning and having the opportunity to work in a field that you love is priceless.

We’re one month away from the start of the 50th Annual WSOP! What event are you most looking forward to?

Over the past year, I’ve been aware of a Live Reporting Blogger position that’s listed on PokerNews. I wanted to apply for it, but before I did I emailed Robbie.

Robbie is a self-made man in the poker media industry, and I wanted to get some insight from him about how I could really make myself stand out when applying for this position with PokerNews. He immediately emails me back and says “let’s talk about this over the phone.”

It’s 1 p.m. here in California, which means it’s 11 p.m. in Israel, where Robbie resides. Despite the late hour, and the fact that he’s feeling under the weather, Robbie is willing to talk about this right now!

After answering some questions I had, Robbie offered to make an introduction to Yori Epskamp, the Head of Live Reporting for PokerNews. A door had opened. Now it was up to me.

I’ve reflected on those summers working at the 2009 and 2010 WSOP many, many times. My life took a different path in the 2010s and I never thought I would be back at the WSOP.

But this year it’s happening. After corresponding with Yori, I received an offer to work as a live reporter at the 2019 WSOP, for PokerNews. I’ll be in Las Vegas for the duration of the 50th Annual World Series of Poker, which is now just a couple of weeks away.

Working toward a big dream comes in little steps, little pieces. If there’s something you want to do in life, think about what the very first step would be in moving toward that dream. And keep stepping, keep striding, keep running with it!