I had heard of Upswing Poker, but I had never even considered using it. In my own little world, I feel like I had plateaued. For the stakes that I play and the tournaments I choose to play I feel like I have reached a position where, with sufficient amount of luck, I should do very well. That isn’t to say I hadn’t heard of Upswing Poker. I had attended a small party of theirs in Vegas last year, and was struck by the approachability and professionalism of the group of people behind the brand.

The Upswing Poker Lab is in-depth. It says on the site that it was “crafted by Doug Polk and Ryan Fee” and I’m liable to believe them, especially considering the wealth of live-action videos that are included. If either Polk or Fee aren’t for you, then there are equally usable and in-depth written guides as well.

It’s a fucking impressive website; not presented in as-professional a way as possible, but the content is incredible. They make it clear that if you are struggling to take in more than a couple of sections a day, that you should come back the next day, and that no one is meant to consume all of their content in one sitting. You’d be hard-pushed to do so even if you tried! 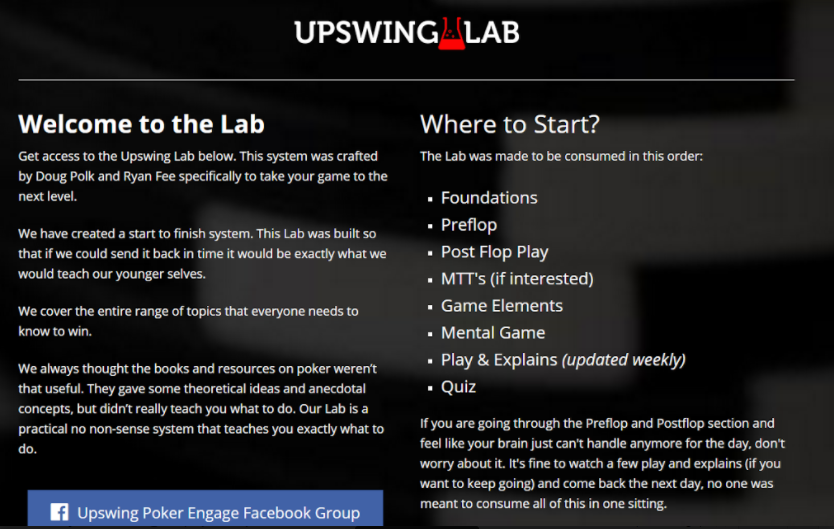 I’ve played poker recreationally for almost five years now, starting off playing for pennies at university, to putting down several hundred pounds for the odd tournament here or there. I have no plans – nor have I ever had any – of becoming a professional, but there are several terms that these guides have introduced to me that I can already feel have meshed with other cogs of previous poker strategy I have picked up along the way.

For example, the idea of RFI (Raise First In) was something I knew was important, but had never focused on as an individual asset to my game; something which can be analyzed in-depth, broken down into ranges. In my head I knew I had a raising range, but there’s something about a three-letter acronym that makes it more quantifiable; a more tangible aspect of my poker game.

Similarly, analyzing post-flop action with regard to whether it was a three-bet pot or a single-raised pot. Then analyzing that action where you were the pre-flop raiser, or the pre-flop caller. Then if that’s not enough, you move to the turn as the pre-flop raiser in a single-raised or three-bet pot. In one of the first episodes of the Lab, they show a decision tree for action on all three streets, and the subsequent episodes go some of the way to analyzing the potential play given the branch of the tree you choose to go down.

Just subscribed to learn more poker with @upswingpoker – Got a life membership for $500 – I see potential in this – good luck guys. #poker

What Could Be Improved?

There are a few things I feel need cleaning up, like a clearer Contents page for the episodes within the Lab. I kept on scrolling through the page being almost overwhelmed with the content and unclear of whether I had read/watched it or not. Another small gripe is that in some episodes Polk is seated in front of a clear background, explaining the episode very clearly and professionally. In another episode, Fee is seated in a house with a window in the background showing the reflection of someone, with another screen open that he keeps referring to. The disparity between these two styles shouldn’t be overlooked, and is something that – as the site continues to grow – I feel they ought to look back and redo certain old episodes. This is not because the content is outdated (although given how much the pair know about poker today, that could also be the case), but rather because their ability to make the content professionally presented and produced has grown. 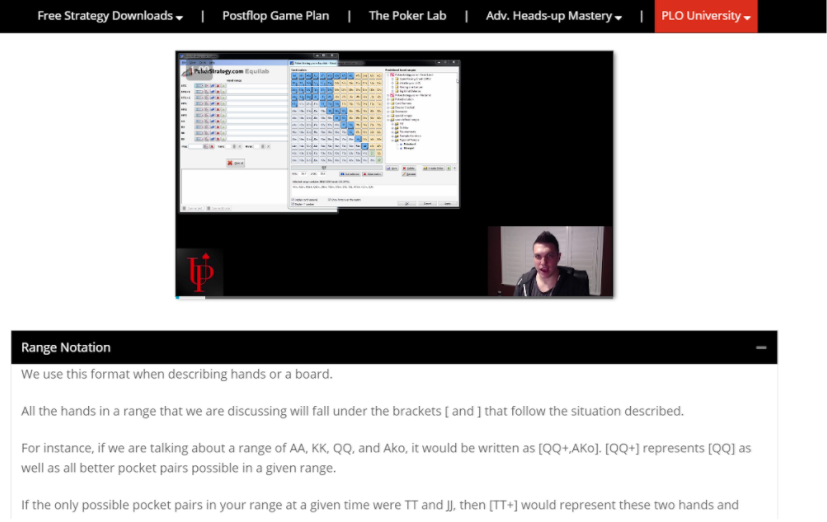 I can see myself coming back to this guide over and over again, either a) finding content that I didn’t pay close enough attention to or b) finding new ways to interpret content that I had already read, based on new situations that had come my way over the course of playing more poker.

I know that the Upswing Poker training site also has a number of additional add-on programs, including heads-up training, Mixed Game Mastery, and a PLO Lab that I’m excited to try my hand at in the future. Those are areas of my game that I know for sure need the most work, as I have never even considered playing either of them “properly”. That is to say that I don’t think I’ve ever played a competitive hand of heads-up poker (purely heads-up that is, not counting when you’re down to the final two of a tournament), and PLO has always been that elusive beast that in my head will require a lot of effort to finally tame.

I’m excited. Like I said, this is the first time I’ve properly sat down with a training site. Although at first glance there seem like a lot of gaps, I’m sure that for me it will take time to work out what kind of content on the website is for me, and what is for more beginner players. Furthermore, as more content comes along, I definitely envisage myself trying it out, perhaps branching out into mixed games and more elaborate games outside of the Texas Hold’em/Pot-Limit Omaha dichotomy.

If you think your basics are in need of a brush-up, or perhaps you’re curious about what the Upswing Poker Lab can bring to your poker game, by all means check out this training course. If you’re a grizzled and season veteran, in order to prevent yourself from feeling like you’re treading water in a sea of poker training content, I suggest that you aim for some of their more specific/specialized materials.

Will Shillibier is a freelance poker journalist and writer from the United Kingdom. Since 2014 he has covered everything from live reporting, interviews and photography, to online content writing, all whilst studying at university. His articles have featured on PokerNews as well as the PokerStars Blog.

He is also the Editor of Backdoor Quads, an independent poker blog, and can be reached at w.shillibier@gmail.com.