Next Year In Vegas. A Poker Writer’s WSOP Confession

I have never been to Las Vegas.

There, I said it. Despite growing up in the shadow of Atlantic City, despite playing well over a million hands of NLHE online, despite being a current Run It Once pro, and despite working on and off in the poker media for 3 years now, I have never been to Las Vegas. Not a single time.

And yet, improbably, I still feel like I’ve been to the hallowed halls of the WSOP summer after summer for the last 8 years. A fact that just goes to show you how powerful and important the WSOP is to those of us who have the game in our blood.

A Summer in Paris… Spent Dreaming of Las Vegas

My earliest memory of attending the WSOP in my mind was the 2009 Main Event.

I spent that summer interning at a law firm in Paris, and living in a dorm on the campus of a university whose name I can’t even recall anymore. But what I do remember about that dorm is the bathtub. Why the bathtub? Because that’s where I would relax and listen to the ESPN podcast every night, recapping the action that was going on an entire ocean and continent away in Vegas. I would lie in the water, eyes closed, visualizing the scene and hanging on the words of every update.

I remember being so desperate to play that I ended up playing some tournaments and cash games in one of the old Paris card rooms that was later closed down (I cannot find the name online, but it was not the Aviation Club – you had to “join” the Aviation Club to be allowed to play there, and in my estimation, no self-respecting American pays a cover charge to enter a casino). Even when I was supposed to be studying law in another country, the allure of the WSOP had me dreaming the impossible dream of poker glory as I spent evenings in the card room grinding away, and, one time, grinding until I saw the sun rise over Paris herself.

And so, with the WSOP as my lifeline to a poker world that I wasn’t even on the outskirts of, like I am today, I spent an entire summer in the City of Lights, dreaming about the lights of Vegas I had never even seen. I think I managed to learn some law in there too at some point, but my most vivid memories are of that bathtub, conversations in my adopted tongue going deep into the night, and playing poker until dawn.

Sometimes, I’ll still call out the French names for “call/check/raise” when I play in AC, just for nostalgia’s sake.

Nostalgic for the WSOP I Have Never Lived

Sometimes I don’t know why I’m not a professional player. And don’t mistake that for cockiness – when I say “professional player” I mean that in the sense of just playing all the time for money, even if I wouldn’t actually make any money. Life just hasn’t taken me in that direction. Did I, in another universe, become so enamored by the card scene in Paris that I never left it? Almost certainly. But it wasn’t this life, which I sometimes find odd because I went into law school in 2007, so it wasn’t like I had stellar job offerings to go to.

In fact, the irony is just dawning on me that I’ve never been a lawyer, either. I graduated law school and then did run away and move on to other things completely off the beaten trail. But not to poker. Poker continued to be that thing that I wanted so badly, but always kept at arm’s length for some reason.

But still, every year when the WSOP comes around, my life decisions give me pause. 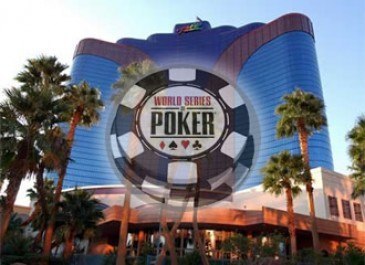 Somehow, more than the hours spent playing, or watching Twitch streams, or writing about poker, or just talking cards with friends, the WSOP always piques my nostalgia, imagination, and hope. Because really, isn’t that what the WSOP is all about? What else could possibly capture our imaginations other than that most elusive and cherished of emotions… hope? Nostalgia for those highs, lows, beats, brags, laughs and cries that another Bradley, in another universe, has been having in Vegas for nearly a decade now – has been having for 8 WSOPs running, while capturing 7 WSOP bracelets along the way?

What else could bring the thousands upon thousands of friends, acquaintances, and perfect strangers together to the middle of a lonely island of civilization in the sweltering heat of the Mojave Desert at the height of summer? A card game? A simple card game?

I think not. The thought that such a thing could induce vivid, near hallucinogenic memories of a Parisian dorm room seems too surreal to me to be true. It’s not the WSOP that we all love, but what the WSOP represents.

Next Year in Vegas

So this year, as I watch the WSOP on PokerGo, I’m thankful, as I am every year, for the all the memories my virtual-time spent at the WSOP have brought me. Thankful for the podcasts, ESPN broadcasts, articles, tweets, streams, and world-of-mouth details that are all I have to bring it alive for me every year.

Will I ever get to Vegas? I hope so. But it’s going to hard; every year there seems to be some reason why I can’t make it.

I did once get a direct offer to go there for a bachelor party. But at the time, I only had $100 to my name, and that didn’t seem like enough to bring to Vegas without slowing everyone else down. And anyway, as I always tell my wife (who has been to Vegas many, many times), I’m saving my first trip for when I can get off the plane, enter the Main Event, and ride that beginner’s luck all the way to a bracelet the way I’ve envisioned it so many summers before.

So I confess that, once again, I’ll be experiencing the WSOP the same way I’ve experienced all the others I’ve lived through – in my mind’s eye. And all the while, I will continue to dream the dreams that only a poker player can understand.

Next year in Vegas.