Back in June, the Cardplayer Lifestyle poker blog reported that there would be a $1 million buy-in event at the 2012 World Series of Poker. Over the last half year, another few players have paid the buy in, bringing the total number of confirmed entrants to 22.

The poker tournament will in part benefit Guy Laliberte’s One Drop Foundation, which works to increase access to clean water worldwide, as $111,111 of each $1 million buy in (11%) will be donated to charity. Laliberte, owner of Cirque du Soleil, has worked closely with Caesars Entertainment, which owns the World Series of Poker, to organize the “Big One for One Drop” event. 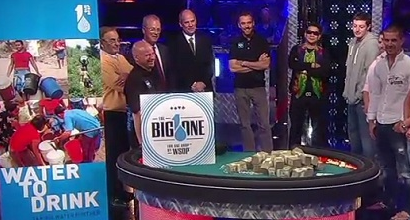 Some of poker’s biggest names have ponied up the 7-figure buy in, including: Daniel Negreanu, Tom Dwan, Gus Hansen, Tony G, Johnny Chan, and Patrik Antonus. Recent confirmations include other top poker pros like Betrand “ElkY” Grospellier and 2010 WSOP Main Event Champion Jonathan Duhamel, who has promised 5% of his winnings to the One Drop Foundation if he cashes in the event. Joining the sharks in vying for the multimillion-dollar prize pool will be Laliberte himself, along with billionaire banker Andy Beal, Treasure Island owner Phil Ruffin, and former WSOP Main Event Champion and current MGM-Mirage CEO Bobby Baldwin. Other entrants have preferred to remain anonymous thus far.

What’s special about the 22-person milestone is that it officially passes the threshold needed (21 players) to ensure the World Series of Poker will sanction the award of a bracelet to the winner. And it won’t just be your “run-of-the-mill” bracelet either. On top of millions of dollars in prize money, the winner of this special event will take home a unique, first-of-its-kind platinum WSOP bracelet. The event will thus also count towards official career earnings and title records. Should total attendance eventually surpass 29 players, the tournament winner would be awarded the richest prize ever in WSOP history, surpassing Jamie Gold’s $12 million score back in 2006.

There’s still a while before the event’s July 1st start date for seats to fill up; the event has a 48-player cap. That’s enough time for high rollers like Phil Ivey, Sam Trickett, and Erik Seidel to make up their minds about whether to play. With that much money up for grabs, something tells me we’re likely to see them at the table this summer too.

As for the event structure itself, players will start out with 3 million in chips and play 60-minute levels over 3 days, until a winner is crowned. Anyone wishing to participate must first deposit $50,000 to reserve a seat and pay the full $1 million buy in by 2 weeks prior to the event. However many players end up playing, the event will see 20% of the field cash.