Jonathan Duhamel has won the 2010 WSOP Main Event. The 23-year-old professional poker player became the first Canadian World Champion and had a payday of almost $9 million. Duhamel enjoyed a memorable run to defeat the 8 other remaining November Niners, the most famous of whom was Michael “the Grinder” Mizrachi, who finished 5th. 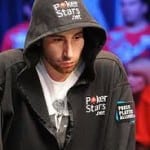 Duhamel’s heads-up match against John Racener lasted just over 40 hands, where he used his overwhelming chip advantage (about 6:1) to decimate the 24-year-old Miami pro. The final hand saw Racener’s Kd8d fall to Duhamel’s AsJh, when the board failed to pair either player’s cards.

As we all know, even the best poker players need to run well in order to make the final table and win the Main Event of the World Series of Poker. Duhamel was no exception. For instance, Duhamel clearly had Matt Affleck to thank for being the chip leader, coming into the final table with more than 30% of the chips in play, having taken the latter’s mountain of chips in one of the most heartbreaking bad beats in WSOP history. At the final table itself, Duhamel got lucky when all-in for his tournament life with A-9 against Michael Mizrachi’s pocket 3s. Finally, when 3-handed, he was fortunate enough to pick up pocket queens right when Joseph Cheong was 6-bet bluffing with just ace high, to take down the largest pot in World Series history.

Anyhow, we here at Cardplayerlifestyle.com wish Duhamel well during his reign as champ. Congratulations.