Interview with Allen Kessler, the Chainsaw 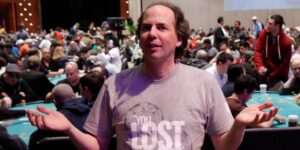 Together with my Top Pair Home Game Poker Podcast co-host Bruce Briggs, I recently interviewed Allen Kessler, fondly known by the greater poker community as the “Chainsaw”. Having developed a reputation over the years for being quite particular about tournament structures, Kessler is on a crusade to give poker players the best possible value for their buy ins and entry fees. Over time the “Kessler approved” tournament structure has become known as a badge of pride, with tournament venues and directors around the world eagerly working towards getting it. Below, you’ll find the entirety of Episode 22 of the podcast, which includes the interview with Allen starting just after the 16-minute mark. You can also read the summarized transcript below.

So we’re lucky to have a wonderful guest with us this week, Allen Kessler. He’s known as the “Chainsaw”. He plays at WSOP, WPT, and HPT (Heartland Poker Tour) events. He has 3 WSOP Circuit rings and is currently the leader in the HPT Player of the Year race. Thanks for joining us here Allen.

Thanks for having me on your show.

Yup – we’re happy to have you. You’re quite the name in poker. Just this year I started watching the Heartland Poker and you’re a real presence there.

Are those your favorite events to play in or is there a different tournament series you like more?

I like going to different cities that I haven’t been two, so I’ve latched on to the HPT and MSPT (Mid-States Poker Tour). I just went to Firekeepers, where I’d never been before; they had 518 people for a $1k buy in. The MSPT has been really successful.

MSPT have the RFID chips set up in there and the tournaments that I go to I do the commentary there for them. Heartland has an amazing set-up. They don’t have too much staff or too many cameras but they do great work and it looks like any other big production when it’s on TV.

So your nickname is the “Chainsaw”. How did you get that nickname?

It started in 2007 in Foxwoods. There’s a thread about it on the 2+2 forums.  At the time on the Poker Road show they had a thing that they’d play chainsaw sounds while they’d comment on my play… Gavin Smith and Joe Sebok.

I like the name. When I go somewhere, people don’t call me by my name – they just say “Hey Chainsaw”. It has kind of caught on.

It used to be a joke because back then I was playing super tight. I made a few WPT Foxwoods final tables and they said I cut through the field, but it was sort of an “opposite joke”.

Seems like you play in all sort of tournaments; i.e., Mixed Games besides Hold’em. You started your poker career playing cash before transitioning to tournaments. Do you also play cash games regularly? Which ones and for what stakes?

I don’t play much cash at all. Maybe at a place like the Commerce where they have games I like. In Vegas I almost never play in cash games. I’m almost always traveling. I do play a lot in casinos to take advantage of and fulfill the requirements of their promotions.

Plus, I prefer Limit Omaha Hi-Lo and Limit Stud 8 or Better. Also the Borgata because I grew up playing there and they spread the games I like. I play at stakes like $50/$100 or $30/$60 mixed games. Years ago I used to play $100/$200 at the Taj every weekend. But now it really has to be a game that I like with people I like.

I definitely prefer limit games and I’ve done well in those types of tournaments. I played those games for years and years.

Well, as you mostly play tournaments then, it probably comes with a lot of variance, so you do you temper that?

I play lots of tournaments and I travel to places where I like to go. There are a lot of expenses like hotel, airfare and food. I like to go places where I can get free hotel, free airfare and free food. I do it because I enjoy it. All those things add up plus there’s very high juice in some tournaments these days. So there are very few people who can just play tournaments for a living. If all you’re going to do is travel around and play $300 events on the Circuit, that’s pretty difficult.

I play higher buy ins, like $1,000 and up but I go to places where I don’t have too many expenses. Thus it gives me a much better prospect.

You regularly post pictures on Twitter of big video poker jackpots you hit, so you clearly play those machines a lot. What do you enjoy about them that “regular poker” is lacking?

With video poker the best game you’ll find is 99%. If you play those machines reasonably well, you’ll earn lots of comps and perks and those will help you cover lots of your expenses. There’s lots of variance with that too. You could win thousands or lose thousands. So, you have to have a good bankroll to do that, but if you do, the benefits like free food, room, and airfare are worth it.

I can go to Venetian or Stratosphere anytime… the fields are tough; it’s ridiculous. So instead I’ll go to Black Hawk Colorado. The level of play is softer. I have free rooms, good machines, a hotel I really like. So it’s like a vacation where everything is covered. Free airfare. Why wouldn’t I go to Black Hawk? Daytona Beach Kennel Club, it’s great, but I’m trapped there.

So that’s the whole reasoning behind playing the machines.

Your name has over time become synonymous with strong opinions and complaints about tournament structures. You’re also thought to be quite particular about rewards points schemes, etc. Why are these things so important to you and how do you feel about this being your reputation in poker?

If you travel to lots of different tournaments, you get to see what value is in each one. You can actually stand up for the players when you say which one is better value. The ones that have better structures are the ones players ought to be going to. This makes tournament directors change things for the betterment of the players. I’ve had numerous discussions over the years with Matt Savage and I’ve blasted him for bad structures many times.

There’s something I like to call the “10 bet wall” in a limit tournament: how many levels of a tournament you have to play until the average stack is just 10 bets.

Sometimes, during a tournament, I’ll walk up to the tournament director and let him know that the structure has a very important level missing. He’ll often reconsider and on the spot add that level into the tournament. It’s happened to me at least 5–6 times.

I’ll also make noise sometimes on Twitter before a tournament and publicly let the directors know that they’re skipping important levels during the tournament structure. They’ll often reply and ask what they need to do to make their structures “Chainsaw approved”, so I’ll let them know how it can be tweaked. This must’ve happened 50 times in the last year, because I’ve gotten so famous over this stuff.

The HPT didn’t even used to have $25 chips! So I approached them, worked on the structures, and they agreed to a slightly modified version of my structure. Same story more or less for MSPT tournaments.

The right structure can still be good for the players while not extending the tournament itself.

I’ve done this even while playing in tournaments. Some venues proudly bear the “Allen Chainsaw Kessler seal of approval” and as a result their attendance figures are over 30% up.

I like to have a lot of play and value in a tournament when I play.

The recent SHRPO tournament in Florida that didn’t meet the guarantee had a flawed structure. As a result, stacks dwindled quickly. Better players who busted out have the money to rebuy many times but weaker players who satellite in just have their one shot. So they end up playing against seven Justin Bonomos and seven Vanessa Selbsts. All the superstars of poker are the ones making the final table – THAT’S the reason.

I like tournaments that start deep and are deep throughout. The Borgata is known for that. WPT structures, on the other hand, are known to be pretty darn fast and there’s no reason to do that.

If people put on great tournaments with great structures, I want to let players know about it, so I help promote those tournaments. That’s where players will end up going. This kind of thing eventually gets other venues and directors to change structures for the benefit of the players, so that’s why I do it.

Lower buy in players can be pushed out of the tournament scene. I don’t like things that benefit players with deep pockets. We need more average Joes playing poker and can’t stack the deck against them.

I helped Matt Glantz with the structure of the Parx BigStax. I helped the people over at Planet Hollywood tremendously – people were saying that their tournaments over the summer during the WSOP were the best they ever played.

The further away from the beginning of a tournament the 10-bet wall is, the better chance a player has to build up a stack or 30 bets when the 10-bet wall is reached. That makes it much better for the players.

How often do you play in home games and with whom?

I started in home games in college. Our Monday night game was hi lo. We played crazy games. Replace a card. Declare games. All those crazy games we used to play gave me the experience I needed to go and start playing 7-stud in Atlantic City. I met Phil Ivey, Cyndy Violette, John Hennigan and all those people playing mixed games there and all the experience for that I had originally built up in those Monday night games in college.

I played in that game for 10 years. Sometimes it was more than once a week. We had lots of different variations of hi lo and that got me interested in mixed games, so in retrospect I appreciate that. It was mostly in college and with people I worked with.

It was nearly always mixed games… sometimes the 6 was the best low instead of the wheel. Sometimes you declare low even though you didn’t even have a low, realizing that other players would be declaring high. That kind of stuff schooled me on different hand values and mixed games in general.

There was no rake. There was no need to give any money to the house beyond chipping in a bit for the food. We were social. It was great – home games are Chainsaw approved.

Anything else you want to tell us and our listeners Allen before you go?

Yes. One of my favorite venues to play is in Black Hawk, Colorado. They’ve got tournaments with excellent structures there and people really ought to check it out and visit there some times. Excellent value for your buy ins and great for players.

Steven – strange place to comment… Thanks for reading though.

In any case, answers here: