If Full Tilt Poker Finally Pays Back Players, What Would You Do with the Money?

Millions of words have been written about Full Tilt Poker over the past year, starting from when Black Friday hit, and continuing through news of their lost gaming license, ceased operations, and eventual buyout. Cardplayer Lifestyle has been among the many poker news outlets that have given significant coverage to arguably the biggest poker story of 2011/2012. This poker site was even fortunate enough to land an exclusive scoop when my good friend Jason bumped into Chris “Jesus” Ferguson (who literally hasn’t been spotted anywhere in the last year) at London’s Heathrow airport. With all that we and the rest of the poker media have reported, it seems as if everyone who ever had money in a Full Tilt Poker account has given up and said “the money’s gone, I’ll never get it back”. But what if you did? 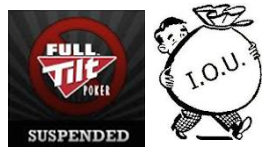 How Much Did You Lose? Hundreds? Thousands? More?

Most of my friends that had money on Full Tilt Poker lost anywhere from 2 to 4 figures. Many pro grinders out there, however, lost far more significant sums of money; we’re talking 5 and even 6 figures! Notable “name” pros had been reported as having large percentages of their total bankrolls online; wiped out they had no choice but to start from scratch and rebuild. Many recreational players ended up leaving the game altogether for lack of choice, while the more serious grinders out there took drastic steps like moving abroad to keep playing online poker. Thus, if players were ever to get their money back, it would range anywhere from “cool” to a pretty big windfall to potentially life-changing.

So, How Would You Spend It?

This begs the question: how would you put your money to use? Well, depending on just how much you’d be getting back, we can think of a number of different poker-related options:

Did you have a Full Tilt Poker account? What would YOU do with the money if you ever got it back? Sound off in the comments section below or on our Facebook page.

i would play like i play before, coz i dont like PS.
i played 2hours 25d a month, it was good extra money 🙂

Thankfully I only have like $140 “Currently” in my FTP account. But its sad for the people who have thousands in their accounts, that were all lost.

If I had the money I would do what one of the other commenters said and I would go back to playing online poker.

I live just miles away from a couple casinos and I haven’t been there in months.

Hey Sper – totally hear you on that….so many people are just itching to play online poker again…and most people have “low balances” so it’s a matter of just having the ability to do some more playing for the sake of having fun