I want to begin this poker blog post by thanking my good friend Amnon (Jason) Eisner for a bona fide poker news scoop. You see, Jason just happened to be in the right place at the right time: London Heathrow airport on the same flight as Chris “Jesus” Ferguson. Acutely aware that we at Cardplayer Lifestyle would want to capitalize on such a fortunate situation, Amnon took it upon himself to strike up a conversation with the former World Series of Poker Main Event Champion and was kind enough to pass on all the details to us, along with a picture, so we could publish them. 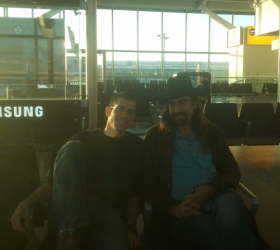 How Did Jesus Travel?

While as recently as 2007, Ferguson had been spotted flying coach, you’d think that after winning millions playing poker and raking in an alleged $25 million+ from his position at Full Tilt Poker, Jesus would let loose the purse strings a bit and spring for first-class tickets. Moreover, the flight from London to Las Vegas takes approximately 10 hours; seriously – no carry-on? Apparently when you’re Jesus, all you need to travel is a wallet, e-ticket, and passport.

What About My Full Tilt Money?!

“I’m very sorry about that… we are working very hard to get everyone’s money back to them.”

It further emerged from their conversation that Ferguson has not played a single hand of poker, live or online, since Black Friday.

As James McManus so brilliantly recapped here, the Full Tilt saga was one of poker’s top stories in 2011. While indeed a deal was reached with the DOJ whereby Full Tilt Poker could be acquired (by the Bernard Tapie Group) and players paid back, not one single player has received any money as of yet. Moreover, the deal stipulated that U.S. players would be paid back via the Department of Justice themselves.

Apparently, Ferguson and the DOJ “are working very hard” on resolving the issue once and for all. So hard, in seems, that neither of them can tell us exactly how or when it’s ever going to happen.