Hebrew in the Hallways: Meet The WSOP Vendors

During my first trip to the World Series of Poker, something caught me by surprise as I started strolling through the hallowed hallways of the Rio. Walking towards the media room, one of the vendors called out to me in a distinct accent that I instantly recognized. I looked right and, indeed, the individual standing there at the booth was easily recognizable to me as an Israeli. So, I decided to have a little fun with him. See, in my “poker gear” of baseball hat, t-shirt, and jean shorts, I look and sound just like any other American male amongst the thousands of poker players. After all, I was born and raised in Los Angeles prior to moving to Israel after high school.

I listened to his pitch. In “typical Israeli fashion” that I’ve become so accustomed to after living in the Holy Land for my entire adult life, he was very aggressively trying to get me to buy the product he was selling. I nodded, listened patiently, and even asked a question or two for clarification. When he finished his pitch with “so, what do you think?” I smiled and answered in Hebrew “my friend, do you really think I want to buy one of those?” The look on his face was priceless. His shock immediately turned into laughter as we both started conversing in his native language, in which I’m also fluent. Elior proceeded to tell me that many of the other vendors there were Israeli, too. I couldn’t believe it. I had traveled 7,500 miles away from the Homeland only to find myself “surrounded” by my countrymen once more. Right at that moment I knew that at some point I’d have to write up the story. 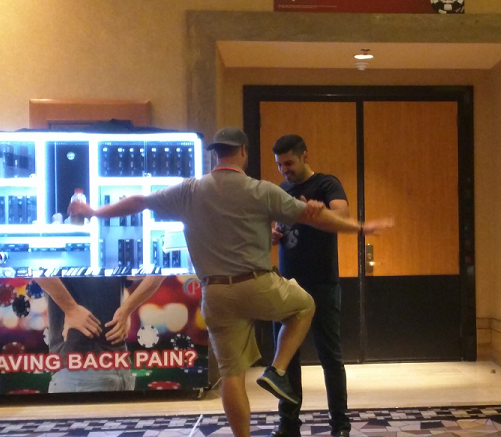 A few weeks ago, after starting to wander the Rio’s halls for a second year, I was further intrigued. Who exactly were these Israelis that showed up to proffer their wares year after year? I wanted to learn more about them. So, I decided to strike up conversations with them; a lot of them.

What Exactly Are They Selling?

The people I spoke with work for a couple different companies, namely Pürlife and Royal.

According to their brochure, Pürlife offers customers the chance to purchase “The Next Generation of Negative Ion Lifestyle Jewelry”. When I sounded skeptical and mentioned that their bracelets seemed kind of gimmicky, they simply told me to Google “benefits of negative ions”. I must admit that the search results made for interesting reading material about how negative ions and tourmaline relieve stress and have “healing powers”. More information about the products themselves can be found on the Pürlife website. 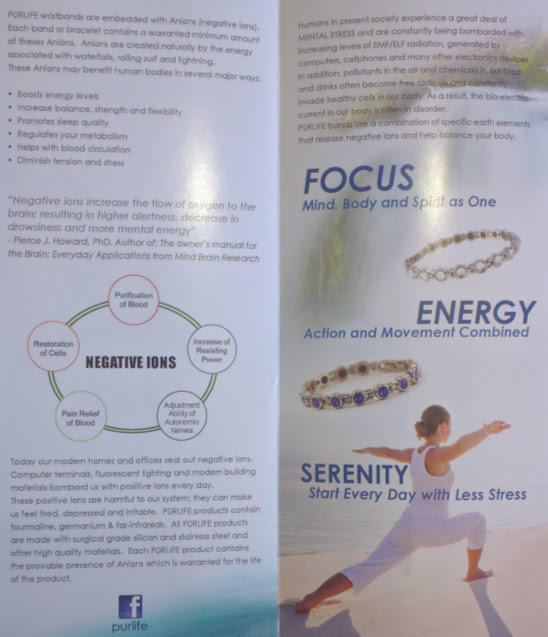 Royal, by contrast, sells a variety of electronic devices, including headphones, chargers, “power cases”, and more. The products range from standard and practical to exotic and luxurious, with some of the more unique items including a luxury crystal wallet, a waterproof Bluetooth speaker, and even a solar power bank. A full range of their products can be found on the Royal website. 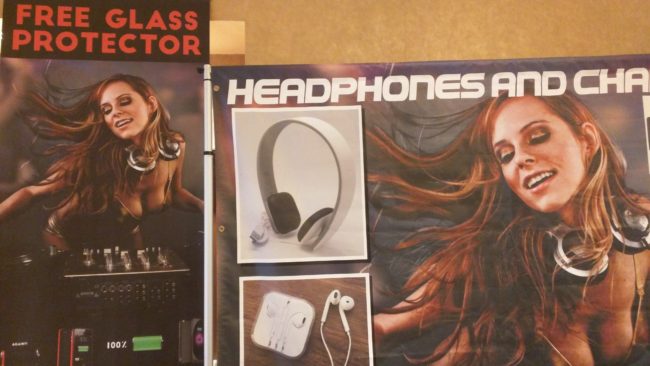 What Are They Doing In Vegas?

It’s well known that Israelis enjoy traveling the world and that they can be found in all corners of the globe. The unusually high concentration of Israeli salespeople in the Rio’s hallways underscores the fact that there’s a whole expat Israeli community living in Summerlin, a few miles from the Las Vegas Strip.

The majority of the salespeople are in their 20s and 30s have been living in the United States for anywhere from 2–7 years, though there are a couple true veterans who boast close to a decade living stateside.

Many of them cited the weather as a reason why they chose Las Vegas. Hot and dry, it’s actually quite similar to the southern Israeli resort city of Eilat, on the Red Sea. Others mentioned the relatively cheap cost of living in the city, especially compared to Israeli cities. “It’s a great place for young people to work hard, make money, and save money” one said.

When I pried and asked for some sort of estimate about how much they’re actually earning, the answer shocked me: they work solely on a commission basis; no base salary or notable benefits whatsoever. I noted that it seemed like a pretty rough way to make a living, but across the board they replied that “the products sell themselves – there’s good money in sales; we do very well!”

What’s Their Backstory? What Are They Hoping to Achieve?

While they all shared a desire to work hard and make money, many of the vendors also had other reasons for taking these jobs. One told me that she was in the midst of pursuing a degree in Computer Engineering at UNLV, and that she has been working the job to help pay for it. Another told me that he simply loved sales, that he had accrued a lot of experience in sales in New York and back in Israel and just wanted to try it in a new place. 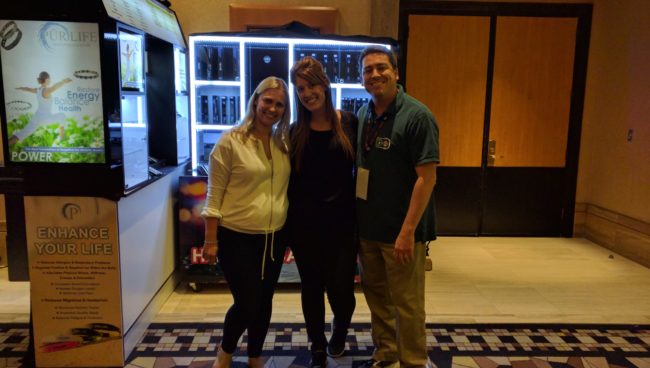 Many of them also have immediate or extended family living in Las Vegas. One particularly interesting salesperson was originally born in Kazakhstan before immigrating to Israel at a young age. Now an immigrant for the second time, she’s the mother of a six-year-old boy and is just looking to help provide for her family.

Pursuing the American Dream; Any Difficulties or Regrets?

Nearly all of the salespeople work in shifts. Some work from 8am-4pm with the second shift coming in to work from 4pm-midnight. Some work weekdays only, while others work weekends, too. Still others work six days a week, only taking off for the Jewish Sabbath. While not particularly observant, one salesperson explained as follows:  “If the Lord could create the entire world in six days and then rest, then I can also rest one day each week.”

The World Series of Poker lasts for six weeks each year, so I asked what they did during the other 48 weeks. Many of them said they work in a variety of malls, with their location assignments only coming the night before the go to work each morning. Others said they worked in a few Las Vegas hotels around town.

Being on one’s feet all day long and dealing with tourists who sometimes don’t wish to be bothered can get pretty tiring and frustrating. I asked how they deal with having bad or tough days and their responses were quite insightful: “We don’t take no for an answer; persistence is the key, never give up… Israelis are good at that. That’s why we get hired for these jobs.” “Every day you start from zero. If it’s a bad day, tomorrow will be better.

Each of these responses resonated with me both as an Israeli as well as a poker player. Our national anthem is “Hatikva” (The Hope); we never lose hope that things will get better; we’re a stubborn-necked people after all. The same holds true in poker. The tide of a bad run can quite literally change with the turn of a single card.

With all of that determination, however, there was just one universally sad thing upon which they all reflected somewhat remorsefully: they missed their families back home in Israel. Undeniably, as great as life might be, and as wonderful as it may feel to be achieving financial and career success abroad, there’s just no place like home.

I’d like to thank all of the vendors who were kind enough to take the time to speak with me while I gathered material for this article: Elior, Keren, Moshe, Eilat, Evyatar, Tom, Alon, Nofar, Or, and Itamar. I know that some of you were somewhat hesitant to open up or were shy about being in pictures. I know that unfortunately many WSOP regulars give you a tough time and don’t always have the nicest things to say about you. I think the problem is that they only see you as salespeople and not just as people. I hope that after reading this you’ll see that I’ve delivered on my promise to shine a positive light on your stories. Your hard work is commendable and I wish you only success and happiness.

To everyone else learning about these Israeli salespeople for the first time, perhaps you’ve bought something from them once or twice. Perhaps you’ve just smiled, nodded, and continued on your way to your seat assignment in one of the Daily Deepstack tournaments or a bracelet event. Regardless, anyone who has attended the WSOP anytime over the last few years has passed by these dedicated vendors.

why have you not informed them that many people (mostly females) are offended by the way they talk to or about them as they walk past.
why didnt you ask them why they feels its ok to comment about people looking sexy (or not).

do you see this way of treating woman as normal, do you to make comments like these men?

Hi Aidan. Thank you for taking the time to read my article and to comment.

Your comments are kind of harsh though, very subjective, and honestly even a bit insulting… a pointless interview? Really? Trying to unearth the human side of people standing there working hard for weeks on end only thought of as “vendors” by the vast majority of the poker public has no value whatsoever?

I published this article last year, in other words, LONG before the ruckus was raised this year through Joey Ingram’s video and the resultant discussion on social media. The reason I have not informed the vendors of anything is because last year, at the time of the interviews, I was unaware of any issues beyond the aggressive sales tactics. It goes without saying that had I been aware or made aware of any sort of sexual harassment on the part of the vendors, I would’ve given them hell right there in person and likely had a VERY different tone overall of this article. But again, I hadn’t seen or been aware of anything untoward other than the aggressive sales tactics (which both the male and female vendors use, by the way).

I didn’t ask them about whether it’s OK to comment about people looking sexy or not because 1) again, I was unaware of any sort of sexual harassment complaints against them at the time 2) OF COURSE IT IS NOT OK TO PUBLICLY CATCALL OR MAKE COMMENTS LIKE THAT!

NO, I most certainly do NOT see that way of treating women as normal and no, I do not make comments of that nature to/at men OR women… I always have and will treat women and men with the respect they deserve as human beings; not as objects.

I’ll be heading back to the WSOP again this year in a couple of weeks. I hope things will have changed by then from the current state, but if not I fully intend to speak with a number of vendors – in their native language of Hebrew – and question them appropriately about any sort of sexual harassment I hear of. There ought to be a zero tolerance policy against that sort of thing.

So, I hope I have made my personal stance clear. Thank you again, Aidan, for taking the time to comment, but please don’t make assumptions.