For upwards of 15 years now, I’ve primarily played in two home games, a local Hold’em/PLO/PLO8 game with my friends and my Dad’s No-limit mixed/wild game. Both home games feature stakes of 1/2 NIS (New Israeli Shekels, our local currency). A typical win/loss runs in the neighborhood of 200-400 NIS, with “big” wins/losses exceeding the 1,000 NIS mark. With the shekel fluctuating over the years versus the US Dollar, those stakes are equivalent to somewhere between $.25/$.50 and $.33/$.66, meaning that we consider it a pretty big win/loss if someone walks away from the table with $250 or more in profits or equivalently in the hole for that amount. As such, like most of you readers out there (I imagine), my usual stakes when playing in poker rooms (abroad, we unfortunately don’t have any here) is $1/2 NL/PLO or $4/8 limit. In fact, I’ve never played higher.

The entirety of my couple thousands of hours of poker play has been firmly within my comfort zone. As a recreational player, there’s nothing “wrong” with that, but I have to admit that higher stakes have always been somewhat intimidating for me. The reason? Frankly, playing just a few hours a week at most for those aforementioned low stakes, it’s exceedingly tough to build a bankroll of a significant-enough size to “not play with scared money.” I’ve been a winning player overall, so I’ve managed to accrue a bankroll quite sufficient for my home game purposes and the occasional sessions in poker rooms abroad, but losing a large portion of it due to running badly in a higher-stakes game is terrifying to me. So in 15 years, then, I’ve never once really “taken a shot,” as it were.

Until I got the phone call.

Right about a year ago, a newer attendee to the home games I play in invited me to play in a game he’d be hosting. As documented on Twitter, that night went particularly well:

That moment you make a last-minute decision to play in a home game and end up taking ALL the money… every last shekel #cashgame #whatarush pic.twitter.com/1L1rL0MQ6F

While I’ve only played in that game one time since (perhaps it has just a smidge to do with that picture above), I did meet some nice people there and have kept in touch with one in particular, Dr. Marc. Keeping in touch these days often means just superficially, on social media and the like, so it was a bit of a pleasant surprise when Dr. Marc called me up.

“Would you be interested in a 5/5 NIS PLO game?” he asked. Frankly, after 15 years of playing home games within my comfort zone, the idea sounded pretty cool! I had so many questions:

After Dr. Marc answered all my questions, I felt considerably more at ease. Then he added one other interesting tidbit: the hostess is a grandmother and a few of the players are in their 80s! As a 30-something who usually plays with other 30-somethings and my Dad’s group of 50- and 60-somethings, this was an interesting, ahem, wrinkle that really intrigued me.

My mood was that of nervous excitement… but unfortunately I wasn’t available that evening. I asked him to keep me in mind for future games and to give me a bit more of a heads up.

A few weeks later, the call came again and I asked him to lock me up a seat.

I went to the game with 1,600 NIS in my pocket; more money than I’d ever taken to a home game. Having been told that the buy-in was 400 NIS, it was the largest sum I’d feel comfortable losing “in the event that disaster struck.” I arrived promptly at 8pm, as did Dr. Marc. We entered the apartment where I met the hostess, a very nice and friendly lady. To my right, I saw the table; have a look below: 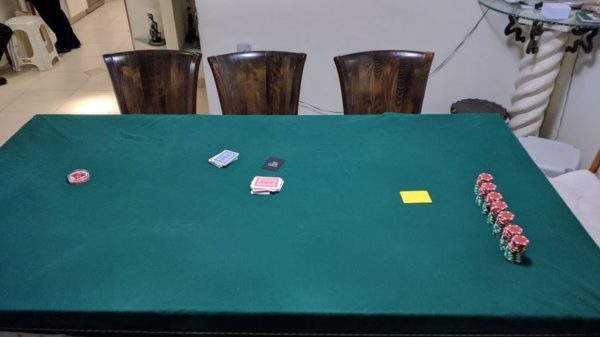 For some reason, I had had the idea that a higher-stakes game than the ones I’m used to would be played on a higher-end table, perhaps something out of the BBO Poker Tables catalog, like the “Viva Las Vegas” table. Instead, was the all-too-familiar home game sight above: a regular dining room table with a felt fastened to it.

While we waited for additional players to show up, we kibitzed a bit and I asked a bunch of other questions about the game:

I asked these questions partly to kill time, but also to hopefully try and calm my nerves a bit. Indeed, my stomach settled down when I got the answers. In short, it was just like any other friendly home game, just for higher stakes. I was making myself nervous for no good reason. I figured I’d be fine playing a bit snug and pushing hard when I had the goods.

Doesn’t It Always Boil Down to One Fateful Hand?

The game started four-handed, approximately 20 minutes after I had arrived. I started off on the right foot, winning the first pot I contested. For the next 90-minutes, my stack steadily increased up to a peak of 950 NIS or so. Things were going swimmingly! And then player #7 arrived… and then, numbers 8, 9, and 10, in quick succession.

Despite all of the questions I had asked leading up to this game, the one I had neglected to ask was “how many people will there be at the table?” While playing at a “full table” isn’t a big deal, the 15 years of home game experience I have is at 8-max tables, with the overwhelming majority of sessions being 6-handed.

Suddenly, then, I found myself relatively card-dead and needing to employ far more patience than in the action-heavy home game poker I’m used to playing. It was certainly an adjustment. For the next three hours, my stack slowly, but surely, got whittled down to around the 720 NIS mark while I sat there… waiting.

This guy was on a short stack waiting for a premium hand. pic.twitter.com/Q6z5klY39e

As often happens in a poker session, one hand can make the difference between a winning and losing session. That evening was no exception. At about 12:45am, 15 minutes before I was set to leave, THAT hand happened. I’ll spare you the specific details, but you can listen to me recount them during the first few minutes of Episode #300 of PokerNews’ Top Pair Home Game Poker Podcast (which I co-host). Unfortunately, the cards and situation would have it that I lost all of my profits I had accrued and had held on to so valiantly.

Weeks later, I’m still shaking my head about how it all went down… I ended up leaving the game with a meager profit of about $5 instead of a big win of well over 1,000 NIS.

In 15 years of playing home game poker, I’ve never “taken a shot” at higher stakes. Tonight, I finally did. Was very strange to be somewhat out of my comfort zone. Heck of a ride that was… pic.twitter.com/FTHmeZd7tU

It has now been about a month since that first 5/5 NIS home game I’ve played in. As it was a highly unusual, first-time experience for me, I do feel that it’s been somewhat cathartic to have written it all up in this post. When all was said and done, I’m happy that I finally “took a shot.” My essentially breakeven result aside, it all certainly could have gone a lot worse.

In these intervening weeks, I’ve gone back to playing my regular 1/2 NIS home games again, and the familiar feeling of being back in my comfort zone was quite welcome. With that said, I’ve realized that 15 years is WAY too long to wait until taking a shot. Having finally overcome the initial psychological obstacle, gathering the courage to lock up a seat in a 5/5 NIS game again is significantly easier. It won’t become my regular home game, but I’m pretty certain that next time Dr. Marc extends n invitation, I’ll be letting him know that I’ll be happy to be squaring off against him and the rest of that PLO home game group once again.