Antonio Esfandiari celebrated his 34th birthday earlier this week at Marquee, a top Las Vegas nightclub located at the Cosmopolitan hotel and resort. In attendance to add to the festivities was none other than Michael Phelps, the world’s most decorated Olympian, who also happens to be a very high-profile lover of the game of poker. Incidentally, Phelps counts many poker pros besides Esfandiari as friends, including Phil Hellmuth and Jeff Gross. 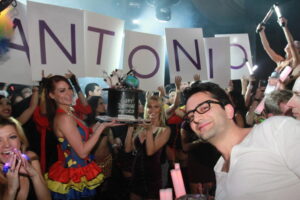 In any event, most poker fans only get to see Antonio Esfandiari while he’s playing the game, usually at a featured table. Since the poker boom, the last decade has seen a number of players, Esfandiari included, become celebrities. That said, it’s nice to be able to see these guys chill out in a non-poker environment once in a while.

The Magician Had a Year to Remember

Undoubtedly, when Esfandiari blew out the candles on the magic hat cake (after all, he is “the Magician”), he probably wished to have his 34th year be as successful as his 33rd was. The specially designed birthday cake was adorned with playing cards and poker chips; pretty appropriate, all things considered. 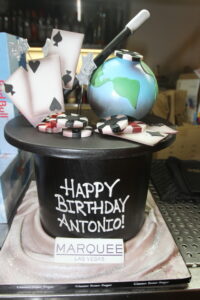 Esfandiari had by far his best year at the felt in 2012. He won the Big One for One Drop this past summer at the WSOP, with first place prize money of $18.3 million vaulting him into the top spot on poker’s all-time career tournament winnings leaders. As if that weren’t enough, he later added another WSOP bracelet (the third of his illustrious career) with a win in the €1,100 No Limit Hold’em event at the World Series of Poker Europe.

Those performances had Esfandiari on track to also capture the WSOP Player of the Year award (POY), but he was later overtaken by Hellmuth and this year’s eventual WSOP Main Event champ Greg Merson. Perhaps a year wiser now at age 34, the Magician will succeed in adding the POY to his list of poker achievements.