The Top 10 Achievements in Poker

Though money made is arguably the ultimate barometer of success in poker, at least as far as tournament play goes we believe that there’s a different, more calculated way to measure success.  Anyone who has ever played the game would agree that there are certain achievements in poker that stand head and shoulders above the rest. Those who can lay claim to the greatest quantity and quality of these achievements qualify for a place in the pantheon of the game’s best players. In that spirit, we thought it would be interesting to try and rank the top 10 achievements in poker. Without any further ado:

Winning a WSOP Circuit ring is comparable to winning a minor league championship. Held in a growing number of mainly WSOP-branded land-based poker rooms, this incredibly successful tournament series attracts both casual and professional players looking to make a name for themselves at the felt. The most successful players at WSOP Circuit events go on to play in the National Championship, for a…

The dream of any and every poker player, winning a WSOP bracelet is universally agreed to be a primary benchmark of poker success. Case in point attributing to a bracelet’s weight and importance is the notorious “best players without a bracelet list”.

The qualitative difference between winning one WSOP bracelet and a second one is not linear, but rather exponential. Strictly speaking, the stars can align for any player fortunate enough to have one really good run. For it to happen again, however, means you’re pretty darn good at poker.

This is the only achievement on this list that’s subjective, as, strictly speaking, it cannot be earned but rather requires being appointed by a private organization. Nonetheless, any player who has performed well enough at the felt to gain the attention and respect of a sponsor (whether poker-related or not), has certainly achieved something great. Winners get endorsement deals.

Though the WSOPE has only been in existence for 6 years, its Main Event has garnered tremendous prestige for a number of reasons, including the high buy-in (€/£10,000), elite field of professional players, and caliber of champions. The event’s winners read like a who’s who of poker and include John Juanda, Barry Shulman, and Phil Hellmuth.

4. Player of the Year Winner

Three of the top organizations in poker grant Player of the Year awards (Card Player magazine, BLUFF magazine, and the WSOP). To earn any of these awards means to have spent countless hours playing and recording consistent unparalleled results over the course of an entire year. It’s hard enough to make a deep run in just one tournament. To make multiple final tables and have a large amount of cashes and outright wins, thus outperforming hundreds of other professionals, within 12 months is quite the achievement indeed.

Quick – name 5 WSOP Main Event winners. Now try to name 10. Pretty easy, right? Hundreds of hours of ESPN coverage have made this the most-watched, most popular event in poker. Main Event champions are immortalized and instantly become household names. The millions earned from just this one win are enough to set anyone for life, and of course catapult winners towards the upper echelon of all-time tournament poker money earners. With thousands taking part in the most grueling grind of the year and only one fortunate player emerging victorious, it’s pretty tough to do something more impressive.

A fixture at the WSOP since 2006, this $50,000 buy-in event incorporates all of poker’s main disciplines to be the most prestigious event played among the game’s professionals. The winner gets their name engraved on the Chip Reese Trophy, so-named for the event’s first winner who was considered to be the world’s best all-around player. Michael Mizrachi has won this event not once, but twice. Those 2 achievements alone are enough to forever throw him into the mix of poker’s best. 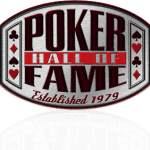 Only 44 people have historically had the honor of being inducted into poker’s Hall of Fame, not all of whom were even inducted as players (but rather those who promoted and grew the game). Considering the criteria to get in and those already enshrined, this is truly the ultimate achievement in poker. Now if only there were an actual real Poker Hall of Fame to visit…

Do you think a different poker achievement should make this list? Would you reorder these achievements differently? Let us know your thoughts in the comments section below!