After 16 Years, It’s Finally Time to Go Bracelet Hunting at the WSOP

Three years ago, prior to my first time attending the World Series of Poker, I penned a blog post called Destination WSOP. In it, my emotions poured forth describing what it felt like for me to finally be making my first pilgrimage to the annual gathering lovingly referred to by so many in the poker world as “summer camp.” The occasion felt incredibly momentous. De facto, the further away one lives from Las Vegas and the more anchored in a “traditional, employed, family-oriented lifestyle” one is, the more complex the logistics of making said pilgrimage.

Alas, I no longer resided a mere four-hour drive away in Los Angeles, where I was born and raised, but rather in a far more distant and ancient land. For over a decade, as a serious recreational player and highly engaged poker fan living in Israel, I felt like an outsider looking in, longingly wishing I could take part in the game’s ultimate festival. I lived my Cardplayer Lifestyle vicariously, over 7,000 miles away.

When Vegas is 7,333 miles away, 🛫 there to participate in the @WSOP is not something one takes for granted. Emotions running the gamut from excited to grateful to anxious and back to excited all over again.

I keep pinching myself. How lucky am I?!

🚗to the airport in <24 hours pic.twitter.com/ms47MQOYsn

At the time, that (first) trip felt like it would be my once-in-a-lifetime opportunity, and I treated it as such, trying to make the most of every moment. Fortunately, in retrospect, it proved to be one of the first major milestones of what has become my career. I had found my way in. Blessed to have had my years of “nights and weekends” work pay off such that I could give self-employment a try and be able to pursue my poker passion through media work, each successive return to the Rio has felt resoundingly triumphant. My excitement levels have not waned even in the slightest, and I’ve even developed what I believe to be a healthy anxiety leading into what has become – and what I hope will continue to be – a yearly WSOP pilgrimage. Indeed, I still do not – and cannot – take attending this annual calendar event as a given.

Now in Las Vegas for my fourth consecutive summer, I find myself a seasoned veteran; a member of the club, knowing all the ins and outs, and even putting together comprehensive lists of WSOP tips for newbies. Yet, there’s still a monkey I’ve got to get off my back.

While I’m grateful to be in a place professionally that I could once have only dreamed of, the poker player within me still has many fantasies unfulfilled, chief among them World Series of Poker glory. One can only be a fanboy and wear a media badge for so long before the desire to shuck off those mortal coils becomes irrepressible. I simply cannot wait any longer to take my seat at the table and let my inner competitor loose.

It’s that burning passion for poker notoriety that can only be achieved at the felt that’s spurred me to finally take my first shot. 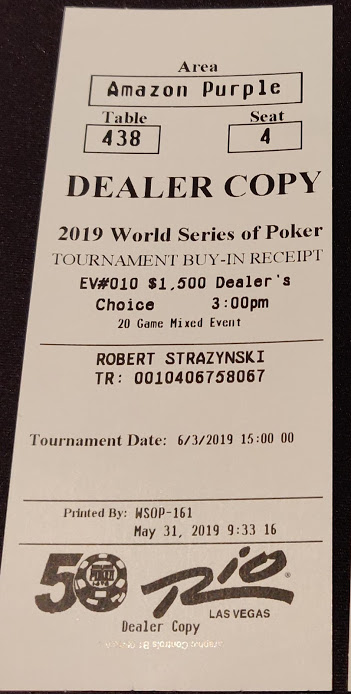 While I first learned how to play poker as a young kid around the kitchen table, like so many millions of others I only began playing regularly and taking the game seriously in the wake of Chris Moneymaker’s landmark 2003 WSOP Main Event win. For over a decade and a half, I’ve been that proverbial “home game hotshot” and that “weekend warrior.” Though I haven’t kept an exact count, I know that I must have close to 1,000 sessions under my belt by now, most of them home games, with a precious few dozen in brick and mortar poker rooms (we don’t have any in Israel, so those only happen on my trips abroad). My many thousands of hours of experience straddles both the cash game and tournament realms, though admittedly I play at most one or two tournaments per year.

Naturally, like my fellow Moneymaker Boomers, I took to Texas Hold’em and have a deep familiarity with that game. Unlike most of my compatriots, however, I also have just as much experience playing all manner of mixed games. That’s why when it came time to choose which would be the first WSOP bracelet event I’d enter, my pick was a no-brainer.

Had my last Dealer’s Choice home game before the #WSOP tonight.

Each one over the last few months has been in preparation for the big day.

If there’s such a thing as emotional readiness, I think I’m there.

So, no, I have not entered “The Big 50,” which so many might feel would be the “obvious” choice. Rather, I will be making my WSOP player debut in the $1,500 Dealer’s Choice event.

Now before the more experienced and professional poker players among you scoff or laugh too loudly (perhaps I’m already too late to muffle those giggles), I respectfully feel like I’ve got a shot at making a decent run. For what skills and experience I may lack, I possess one key ingredient a true poker player needs: I have no fear.

I’ve always felt that my home game is a bit unique. We don’t just play all the games in the typical 8- or 10-game mix. Hell, we play even more games than the 20 one can choose from in the Dealer’s Choice event! Moreover, we play almost every poker variant no-limit, and we switch the game every single hand. If that’s not a poker game that keeps you on your toes and that keeps your wits razor sharp, then I don’t know what is.

So, sure, I don’t have the fixed limit tournament reps like the rest of the field, but there’s literally nothing any player could throw at me that would throw me off my game. I’ve got overflowing levels of stamina as well as excitement to boot, so the only demon I have to ward off is action-hungry spewiness.

And I’ve got a plan for how to combat that, too, namely…

Focus on the Story

My wife – bless her – loves to laugh at me that I can’t tell a story in under an hour. She’s right 🙂 . I love the details. The nitty gritty. The set up. The context. The sub-context. The characters. I’m not a journalist, but I sure am a storyteller at heart. That’s why you’re readying an almost 1,800-word-long essay rather than just a 180-character Tweet.

I know that a poker tournament can’t be won in the first hand, or in the first hour, or on Day 1. I also know that stories that end abruptly, before they’ve had time to flesh themselves out, are the unfortunate manifestations of unfulfilled potential. While I’m under no illusions that I’m destined to hoist a bracelet a few days from now, the only thing that would truly hurt at the end of my first WSOP tournament run would be if I didn’t have a good story to tell.

If I’m going to get eliminated, which of course every player is save the event’s winner, let it be crashing out in a blaze of glory rather than exiting with a whimper.

Let me sit across the table from some players I recognize, such that I could add more layers to the retelling of the experience later on in life. Let me see a hand or two to showdown against one of my poker heroes and perhaps even emerge victorious, so that I can say “I beat THAT guy in a big pot!”

For lifelong recreational poker players like me, even more than the glory, the enjoyment is in the story.

I’ll be playing in a WSOP bracelet event for the first time this summer.

Because I’m excited and it’s all about having the experience, I’ll be registering in person in cash.

Hell, I’m ECSTATIC to have the chance to potentially play 30 hours of poker over three days! When else will the opportunity to do something like THAT ever happen?!

After 16 years of preamble and build-up, it’s time for my #bracelethunting story to begin in earnest. 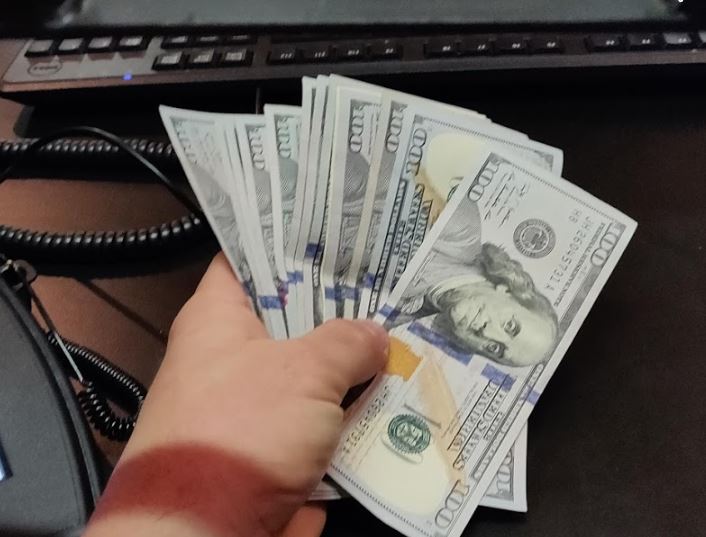 So, yes, I did indeed snake my way through a 45-minute-long registration line such that I could experience the feeling of parting with $1,500 in cash. We’ve become immune to things like that happening in the poker world as they’re so commonplace, but in most any other circumstances, exchanging that much money for a slip of paper solely entitling you to sit down at a table to play a game is exceedingly unusual.

The anticipation was similar to what one feels when waiting to board a new roller coaster at a theme park. More accurately, the feeling is akin to reaching the top of said roller coaster, just before the inevitable plunge. It’s a nervous excitement that’s hard to match, and I loved every unforgettable moment of it. Mirabela, a Bucharest native, handed me my receipt and wished me “good luck.” WHAT A RUSH! Beyond exhilarating. All of a sudden, for the very first time, my long-held fantasies transitioned from the realm of the theoretical to the realm of a possible reality. You can’t win anything without a ticket, right?

And then I broke down and started crying.

After all this time I’ve spent as a poker fan, as a member of the poker media corps… I had my very own moment.

It might be my first WSOP event as a player, but just like the first one I attended as a spectating media member, I’m hoping for many repeats in the future, and I know that I will be performing at my absolute peak A-game to try and make that happen.

Fate, please give me that opportunity to utter those delightful phrases: “found a bag,” “still alive,” “made the money.” To stack heaps of chips in 20s. To tell one of the live reporters how to correctly spell my last name. To have my backers, fans, and followers complain about getting either too many or not enough chip count updates.

In a very real sense, I’m already freerolling, so any progress from this point forward just makes the story richer.

Above all for which I hope, let this moment please just be the opening chapter of a very long story yet to come.

Shuffle up and deal!