5 Life Lessons from My “Failed” Interview with Paul Pierce

Ordinarily, I’d be titling this piece “Interview with Paul Pierce,” but what took place as the context for my poker-themed interview(s) with him is — at least in my mind, and for the purposes of Cardplayer Lifestyle — a “bigger” story. Sure, this site is all about poker, but sometimes the stories we live and tell transcend our beloved game.

I spent many hours preparing to interview Paul Pierce. For a man who has been interviewed thousands of times over a Hall of Fame-worthy NBA career, it’s no simple task to try and craft questions that he hadn’t been asked before. In an attempt to accomplish that, I focused on preparing poker-specific questions. Even so, it was a challenge not to just rehash old territory that had been covered by other interviewers in the past. After those few hours, I felt I had a great slate of questions to which Paul’s answers would make the planned video we’d shoot interesting for our audience here at Cardplayer Lifestyle.

With his time in high demand, I was granted a brief, five-minute window to sit with Paul, with that slot sandwiched in between other interviews he was giving to members of the assembled media at the PokerStars Players Championship in the Bahamas. When crunch time arrived, I genuinely felt as though it was a slam dunk. Clipboard in hand, every question of mine hit its mark, with Paul rattling off one answer after another, and genuinely being engaged and enjoying himself.

As the five-minute clock expired on our time together, I felt on top of the world. After shaking hands with Paul, I joyously picked up all my gear, excitedly moved over to the next table, and donned headphones to quickly listen back and check the raw cut of the interview. There was just one tiny problem… 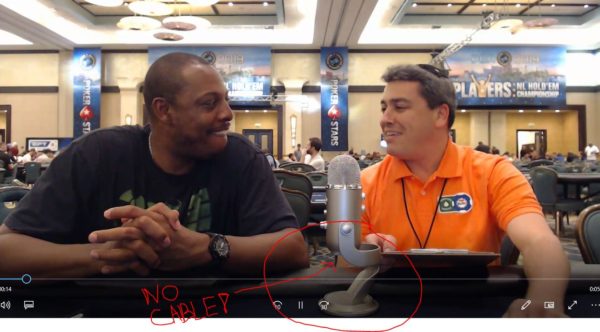 Something is very much missing in this screenshot

To my utter horror, while the video looked perfect, there was no sound to accompany it. At first, I turned the volume up to the max to ensure it wasn’t just my ears playing tricks on me. Alas, my jaw dropped and heart instantly sank when I noticed (as seen in the above screenshot) that I had forgotten to attach the microphone to my computer to record sound. In the rush to set up after the previous interviewer had finished up, and with that looming 5-minute time pressure, I had flubbed one of the critical components of conducting an interview.

My colleagues present at the time immediately noticed my sudden change in demeanor; that something had gone awry. When I shared with them what had happened, their reactions were predictable: shock and empathy. I spent the next couple minutes trying to deal with a very difficult emotion; such a thing had never happened to me before, and it’s not as though I could just call Paul on the phone to reschedule a make-up interview for a different time.

Here’s where I need to give a couple important shout outs:

I had to sit and wait for approximately 20 minutes before knowing if I’d get the green light to take another crack at it. I’m not sure you can imagine my range of emotions; suffice it to say that it’s good I hadn’t yet eaten lunch.

After the last scheduled interview had concluded, I got the nod that Paul agreed. At that moment, I decided to toss my script out the window and instead try something entirely different with two new questions that had popped into my head. Paul answered those two questions in precisely the manner I had hoped, which then gave me the opportunity to share something deeply personal with him.

The new under-two-minute-long conversation that Paul Pierce and I ended up having can be watched and listened to below, with a transcript of our interaction also included.

I got a stark reminder a number of lessons from the episode I’ve just related to you and from the people involved, so I’ve decided to list them (in no particular order) in the hopes that they may inspire you, dear readers:

Robbie Strazynski here for CardplayerLifestyle.com. I’m here with Paul Pierce, NBA champion. Thank you very much for sitting with me today, Paul, I really appreciate it. Just two questions for you: What does it feel like for you when you bust out of a tournament?

You know, it’s one of the worst feelings. I put it on the same level as when I played basketball in college, losing in an NCAA tournament or losing in the playoffs. I mean, it’s a sinking moment where you just feel empty. And then you start thinking about your mistakes, what you could have done better, you know. It’s the same like in sports, man. It wraps around your mind all night because you know the whole night I’m thinking about it… But the thing is, you’ve just got to learn from it, move on and see how I can make it better the next time.

Absolutely. And the other question I have for you is: What’s the most memorable thing that ever happened to you at a poker table?

Set over set. We run it one time, queen on the turn. Boom! I win the pot!

Amazing. There’s nothing more memorable than that.

Well, the reason, Paul, I asked you those two questions, is because you’re now my favorite NBA player. And as a Lakers fan my whole life, I thought I’d never say that about a Boston player. But the reason is because the most memorable thing that ever happened to me at a poker table is I recorded a five-minute interview with Paul Pierce a few minutes ago, and I forgot to plug in my mic with no audio, and Paul was generous enough to give me a couple more minutes of his time.

So, that’s the most meaningful thing that’s ever happened as a poker media professional, so thank you so much.

Oh, thank you, I appreciate it.

I really appreciate it. Have a great time here, sir.