What Are the WORST Texas Hold’em Starting Hands?

These days, even the most casual of poker fans who might happen upon a WSOP broadcast during the summer knows that the best Texas Hold’em starting hand is pocket aces. With an additional 1,300+ potential starting hand combinations, however, the overwhelming majority of the hands you’ll be dealt will consist of inferior holdings. As such, it is best to know how to deal with other card combinations that might come your way.

Sometimes the cards you’re dealt will look appealing and you’ll want to play them. Think a couple face cards, perhaps. Maybe you’ve gotten a couple of connected cards or maybe they’re suited (BUT THEY WERE SUITED!). In most situations, you’ll find that pairs are at least somewhat playable but for all those other hole card combos you’ll get, just like Kenny Rogers’ famous song “The Gambler” advises, “you’ve got to know when to hold’em, and know when to fold ’em.”

The more easily you’re able to identify weak starting hand combos, the quicker you’ll be able to make the right decisions at the table. When to bet, raise, call… or throw your hand away. The easiest decision you’ll usually have is throwing away your hand when it’s quite literally one of the worst combinations possible.

So, without further ado, we present to you the worst Texas Hold’em starting hands.

Holding a 2 and a 7 (off suit) as your starting hand is without a doubt the worst hand you can get dealt. At best, you’d realistically be hoping to catch a 2 or 7 among the community cards on the flop for a low pair, which still makes for a relatively weak hand to carry on with. In pretty much every scenario then, whether you’ve found yourself a seat at the live casino card games or at your friend’s Friday home poker table, folding is the way to go when dealt the dreaded Deuce-Seven. 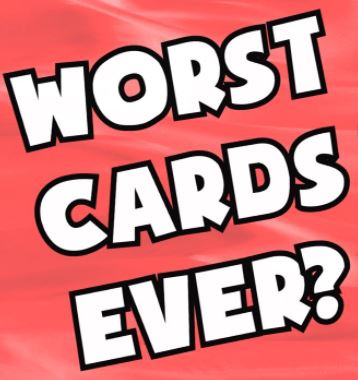 The same issues that arise with the previous card combination are present at this one. In fact, it’s only marginally better. Should you decide to go against conventional wisdom and choose to proceed with such holdings, even if you improve to a pair on the flop, you’ll almost always find yourself behind and needing additional help to improve versus your opponents. Save yourself the hassle – and the money! – and get rid of the Deuce-Eight as quickly as you can… yes, even if they’re suited.

At this point, you probably know the drill. Starting hand combinations of 3-7 and 3-8 are, indeed, better than the aforementioned couple of combinations. The only advantage these combinations have over the ones we’ve listed already is that there’s an outside chance you might hit an inside straight with precisely the right flop. That, however, is most certainly NOT a reason to hold on to these starting hands. If you’ve got any interest in protecting your poker bankroll, toss the cards into the muck. 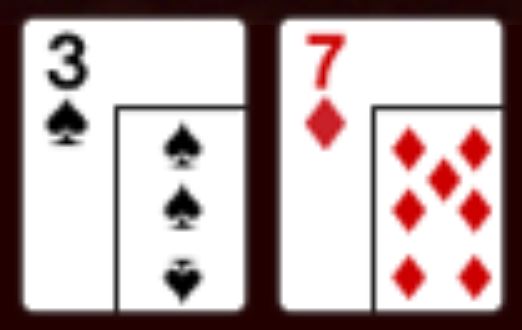 Do these cards appear blurry? That’s because you shouldn’t be looking at them!

Deuce, Three, or Four and a Nine

You pick up your hole cards and start to peel… the first card you see is a 9. Not great, but not horrible either. Then you lift up the second card ever so slightly to reveal… a 2, or a 3, or a 4. The disappointment you feel should be palpable. Even if you’re no math expert and don’t realize that the chances of you winning with a starting hand of that nature are very slim, that sinking feeling you got when discovering that second card ought to lead you to do the right thing, namely chuck the hand.

We’re pretty sure you’ve gotten the picture by now. It doesn’t take a card sharp to realize that while many of the hands you’ll be dealt aren’t too great to start out with, some of them are just pure rubbish and out to be discarded.

So there you have it, a rundown of some of the worst possible starting hand combinations you can possibly be dealt in Texas Hold’em. Hopefully, this is the only place you’ll ever have to see such trashy cards, and the dealers will always send premium hands your way.