A total of 187 players ponied up the $10,300 buy-in to play in this High Roller poker tournament online, which meant first-place prize money of just over $400,000. The event attracted some of poker’s biggest names, including Daniel Negreanu (who didn’t make the money) and 2010 World Series of Poker Main Event Champion Jonathan Duhamel (who finished in a respectable 15th place, good for $28,050 in prize money).

Altogether, it took just over 14 hours to complete the event, which was eventually won by “jcl87” of Australia. Out of the 187 players, only 27 made the money. 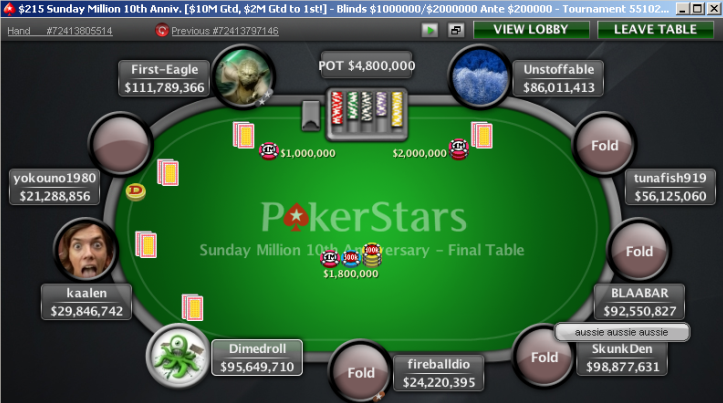 It took 15 hours of grueling poker play to whittle down the original field of 62,116 to just one winner. An incredible 7,682 players cashed, each for a minimum of about $521, not a bad take especially for those who earned their seat via satellite. The $12.4 million prize pool meant that almost everyone at the final table would be guaranteed a six-figure payday, with the top 2 making about $1 million and $2 million, respectively. When play got down to 6-handed, however, the remaining players negotiated a deal based on chip counts, with an extra $200,000 going to the eventual winner. Thus, the winners and payouts were as follows:

Amazing. I played the 200k$ and after 2 hours i grinded a very nice stack It became all-in every hand. These 20k+ player tournaments are mainly luck at some point of the game…