Arguably the biggest poker story of 2010 was the unmasking of Isildur1, a.k.a. Viktor Blom. The super-nosebleed stakes online poker regular instantly shot to fame for taking part in some of the largest contested pots ever against the likes of Phil Ivey, Patrik Antonius, and Tom Dwan. Regularly playing for millions of dollars, Blom eventually signed on to Team PokerStars, where his talents were showcased in heads-up challenge matches against other poker pros, most notably Daniel Negreanu. The only thing missing to solidify his place among poker’s elite was a defining tournament victory. After winning yesterday’s PokerStars Caribbean Adventure (PCA) Super High Roller Event, however, Blom can now cross that off his to-do list for good. 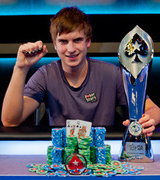 A top-tier field of 32 poker players ponied up the $100,000 buy-in to take part in one of the game’s richest annual events. Only 5 players would end up cashing, each a name with a hefty résumé proving their presence at the final table was anything but a fluke. The smallest cash (of just over $250,000! – just think, bubble boy Scott Seiver went home with $0!) went to Daniel Negreanu, who finished runner-up in this same event last year. The fourth place finisher was 2010 WSOP Main Event Champion Jonathan Duhamel, who added over $310,000 to his career winnings. The third-place finisher was Galen Hall, winner of last year’s PCA Main Event, who earned a payday of over $470,000. The runner-up, Dan Shak, who won a $100,000 at the Aussie Millions 2 years ago, had to settle for “just” $846,700 in prize money, as the lion’s share of the $3.1 million+ prize pool went to Blom ($1.25 million).

In Other Poker News – The Return of PokerRoom.com

The other big story that emerged this weekend was the return of PokerRoom.com to the online poker scene. Originally home to one of the largest bases of online poker players, the Bwin.Party-owned website was shuttered in 2009. Those who began playing online poker way back in its infancy likely remember PokerRoom.com as one of the original “big” rooms. The room sports an all-new look and completely redesigned user interface. Its re-launch is yet another likely indication that Bwin.Party intends to become a major player during the current growth cycle online poker is experiencing.