Short deck poker, 6+ Hold’em, and all the other colorful names this No Limit Hold’em hybrid has been given has gained a lot of popularity lately. This is definitely in part due to the Triton Poker Series and the fact the big-name players such as Tom Dwan, Andrew Robl, Phil Ivey, and others play a lot of super-high stakes Short Deck cash games during these events.

I was intrigued about the game from the first moment I saw it. It definitely looks much more action-packed than traditional NLHE. Hand equities definitely run much closer and the blind/ante structure is such that it makes it possible to play many more hands from different positions. In other words: ACTION! 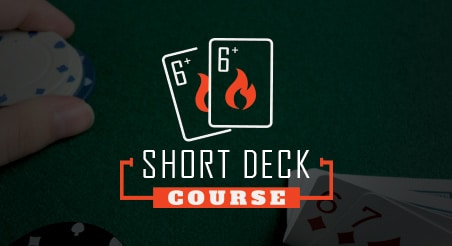 All of this is theory, though. Up until now, there’s been no solid course on Short Deck that would actually explain what this all means in terms of actual hands you should and shouldn’t be playing and what those equities really look like.

So, when Upswing’s Master Short Deck Hold’em was launched I was really keen to watch it. Presented by Kane Kalas, one of the regulars in those aforementioned Triton Poker high stakes games, there was no doubt in my mind this course would offer answers to many of the questions I had about the game. I’m happy to say I wasn’t disappointed.

The course contains over 27 hours of viewing material and is divided into several main groups, namely:

The way it’s been structured, the course can help even those completely new to Short Deck Hold’em. It starts with explaining the rules and goes on to build from there, tackling some pretty high level stuff by the end. There is really no stone left unturned as Kalas does his best to explain every important aspect of the game.

In the Fundamentals section, as the name suggests, Kalas covers the game basics, including the rules. While the game plays a lot like No Limit Hold’em, there are some important differences. The first one is the fact that all the deuces, treys, fours, and fives are removed from play, leaving only 36 cards in the deck.

Because of these changes, there are also some adjustments to hand strengths. In Short Deck, at least in most variations played, a flush beats a full house, which influences the strategy a lot. The structure of the blinds is different as well, as everyone posts an ante and the button posts the double ante, so there is much more dead money in the pot and everyone’s getting much better odds before the flop. 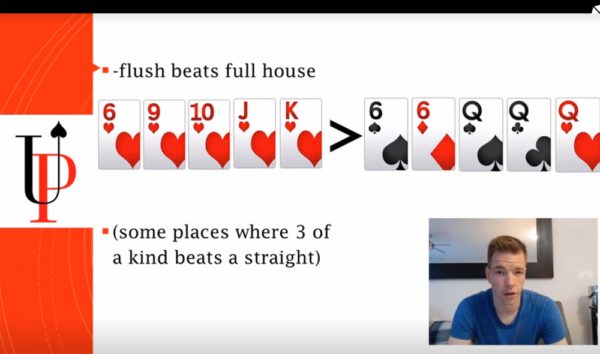 The Fundamentals section isn’t too long, but it manages to explain all the important bits. Kalas touches upon some important concepts such as limping much more often (having a higher VPIP in general), utilizing overbets, and how to properly value hands such as open-ended straight draws.

Already in this section, the course was able to answer many of the questions I had about the game going in and some specific plays I’ve seen on live broadcasts but couldn’t quite understand. The way things are explained in a detailed and understandable manner really provides an excellent foundation to dive into the next section, which is a bit more technical.

The first section after the introduction addresses the pre-flop play, which is a huge part of Short Deck, much more so than in (full deck) No Limit Hold’em. I was really interested in this part and how hand ranges are constructed given the fact that equities are so much closer across the board. Some of the interesting takeaways for me from this part were:

Kalas explains differences between two main variations of the game, i.e., when playing 50 antes deep vs. 100 antes deep. He also spends a lot of time explaining how having 50 antes in Short Deck is very different than having 50 big blinds in traditional Hold’em.

Although this makes a lot of sense when you think about it, he provides the reasoning behind it and really makes it easy to understand. 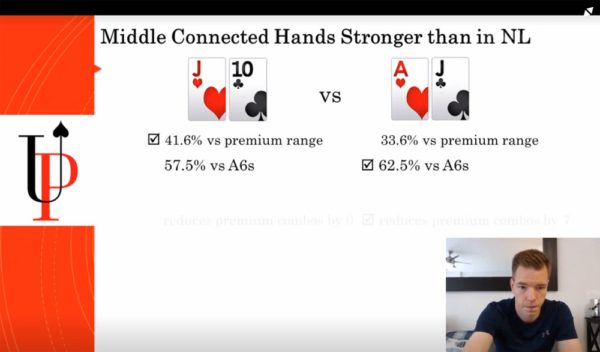 One thing that I was really interested in was why there seems to be so much limping going on and not nearly as much raising. I was a bit shocked to hear that in Short Deck, you shouldn’t really be raising anything before the cutoff in a 6-max game. That’s definitely a huge difference from NL games.

Kalas goes on to explain why this is, and then it begins to make sense, but it’s definitely not something I would’ve been able to just stumble upon. Constructing your ranges in Short Deck is a process in which knowing standard No Limit Hold’em does help, but there are also many new factors to consider.

Although the course is focused on 6-max play, Kalas takes the time to also address heads-up play in several videos, which is a nice touch. In these videos, he covers the most important situations, explaining how to construct your raise and limp ranges when first in, what hands to defend with, what part of our range represents good 3-betting material, etc.

While heads up play isn’t a particular area of interest for me, these videos were still entertaining to watch and quite educational. Having at least a solid idea about your heads up ranges at different stack depths can be useful, even if only when you find yourself battling for a tournament win.

Although there is a lot of focus on the pre-flop segment of the game due to the blind structure, post-flop play is still important in Short Deck Poker. A lot of money will have gone into the pot by the flop, so there is a big focus on that particular segment of gameplay.

The way the post-flop section is crafted is quite intuitive as Kalas analyses different major group of hands, such as:

Kalas goes on to explain these different types of hands in detail on various board structures and how to approach them correctly. There are many great examples in these videos where we’re presented with equities vs. various likely holdings by our opponents. These numbers and percentages are really helpful in understanding why some hands need to be played differently in Short Deck vs. No Limit Hold’em. 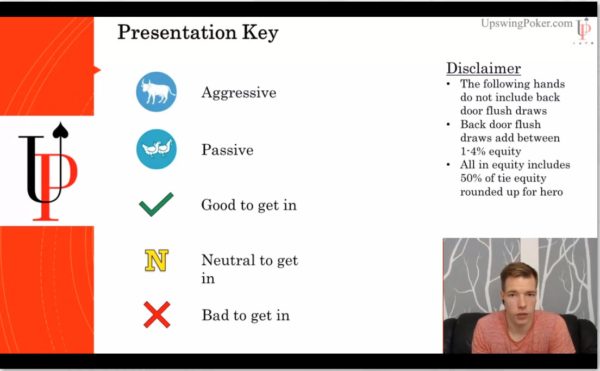 A fair amount of time in this section is devoted to playing nut flush draws, as these are very powerful hands in Short Deck since flushes even beat full houses. Kalas explains how to approach these types of hands depending on the board structure and also does a great job of explaining why our equity is often very high in these spots even though we have fewer outs to complete our flush.

Overall, this section definitely covers a lot of ground in terms of post-flop play. If you’ve been dabbling with Short Deck but are uncertain about how to play different hands like open-ended straight draws, flush draws, sets, etc., this course will shed a lot of light on the topic. It doesn’t just provide you with answers to your questions, but also with great, sound reasoning behind those answers.

The penultimate theoretical section of Upswing’s Master Short Deck Hold’em course deals with river play. I was somewhat surprised by the amount of material covering this particular topic, but Kalas once again quite simply did a great job of covering a wide spectrum of related topics. The section is divided into two main subdivisions:

Across six videos, Kalas goes on to explain how to build your bluffing and value betting ranges when playing as the aggressor and how to find the best hands to bluff-catch with when facing aggression on the river. 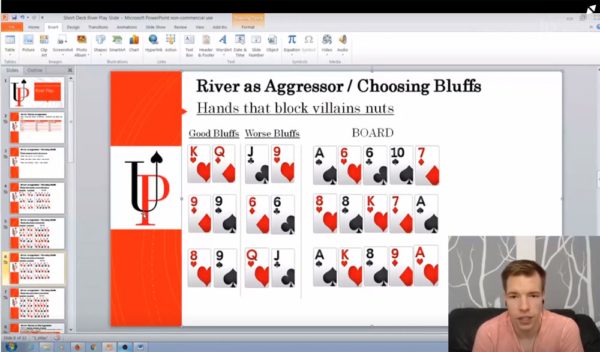 There are some very interesting concepts discussed here, such as anti-blocking, i.e., holding cards that we’d expect our opponent to have in their folding or bluffing ranges. Although the river play may not be as important in Short Deck as it is in No Limit Hold’em, these lessons are still quite valuable and will help solidify your newly acquired Short Deck poker knowledge.

In the final section of Upswing’s Master Short Deck Hold’em course, Kalas moves away from all the GTO talk and actually discusses how we can adjust our play based on our opponents’ tendencies. This is one of the parts that I liked the most because it addresses what you’ll often encounter at real tables.

He identifies several major pre-flop and post-flop leaks that you’ll likely notice when playing Short Deck, such as players limping too much or too infrequently, those who have too many 3-bet folds in their range, failing to shove value hands, c-betting board textures that are good for c-betting in NLHE, etc.

This advice is very useful as you’ll be able to start implementing it straight away. If you’re playing in lower stakes and/or live Short Deck Hold’em games, you’ll likely be up against players who don’t have very good theoretical foundations. This means that they’ll be making a lot of mistakes that you can take advantage of.

The final video addresses the comparison between seemingly same stakes in Short Deck and NLHE or PLO. This one is quite interesting as well as it explains why Short Deck games in effect play much bigger. With everyone posting an ante before the flop and the button posting two antes, there is much more dead money in the pot. Thus, games play bigger and that’s why there is a big difference between having 100 antes in Short Deck versus having 100 big blinds in No Limit Hold’em.

Like most Upswing Poker courses, this one concludes with an extensive Play & Explain section, where Kalas takes a great number of actual hands and goes through them. There are three main sections here, one analyzing the play of an Upswing member, another focusing on his own heads up play, and finally the one going through various live hands from Triton Poker cash games. 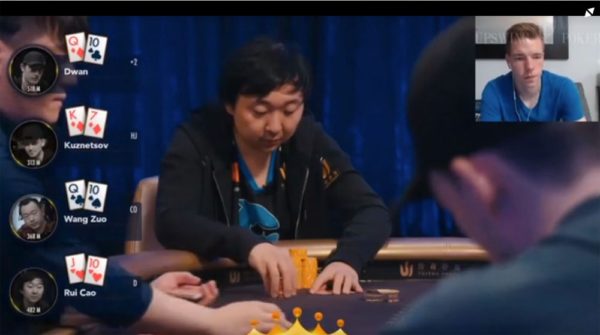 While all of these are very educational, the Triton Poker analysis section is definitely my favorite; after all, that’s what got me into the game in the first place. You’ll get a new look at many of the big pots you might have already seen on live stream broadcasts or YouTube. Kalas breaks down the action and plays from the likes of Paul Phua, Tom Dwan, Andrew Robl, Timofey “Trueteller” Kuznetsov, and others, providing a lot of useful insight.

So, How Good Is the Upswing Poker Short Deck Course?

As it’s currently the only existing course on Short Deck Hold’em, Upswing’s course is the best one by default. With that said, even if there were some competition, this one would likely be the best and most comprehensive course for those wanting to learn the game. Having the talented and eloquent Kane Kalas as the instructor really is a big unique selling point here.

While the $999 price tag might be steep for those playing low stakes poker, the course is structured in such a way that it can be watched and understood by someone who has almost no knowledge about Short Deck Hold’em whatsoever. It’s not aimed at advanced players looking to get better, but rather everyone wanting to become good in this new game format. And remember, you’re not spending money; you’re investing it in becoming a better player!