Two of the biggest names in poker, Phil Hellmuth and Annie Duke, have announced that they have severed business ties with UB. Notoriously in the news over the last few years for corruption scandals (which led to the rebranding of UltimateBet as UB in the first place), UB no longer has any of its inaugural pros left in its stable of poker players. 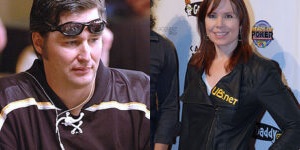 Hellmuth and Duke are likely relieved to finally be free of their contractual obligations, after almost a decade of being the faces of one of the less reputable brands out there in the online poker world. Loyal to the end, both poker pros were quoted as wishing UB well in the future and hoping that the brand succeeds.

Hellmuth, the all-time leader in World Series of Poker bracelets won, is the rare poker pro who can pretty much dictate his own terms as to who his next big sponsor will be. Reportedly fielding offers from PokerStars, Full Tilt, and others, it will be a coup for whichever online poker site manages to nab him – an instantly recognizable face sure to be seen on many televised poker event broadcasts.

Duke, one of the top female poker pros since the poker boom, who continues to post strong results, is no slouch either. In interviews following her announcement, Duke mentioned her intent to remain a presence in the online poker world and that she is looking forward to opportunities for professional growth.