Episode #16 of The Orbit, poker’s premier roundtable discussion show that I host, was recorded on April 24, 2022 and is set to premiere in the coming days.

The World Poker Tour is in the midst of celebrating its 20th anniversary. From a new logo to new ambassadors to the same Grade A poker product we all know and love, the WPT is fully woven into the fabric of our industry as the premier name in internationally televised gaming and entertainment.

On this episode, we wanted to take the opportunity to dive deeper into the inner workings of the World Poker Tour, to examine what challenges it faces and its plans for overcoming them, and hear firsthand how it plans to be an even bigger part of our industry over the next 20 years.

To do that, we gathered together an All-Star panel of WPT talents. 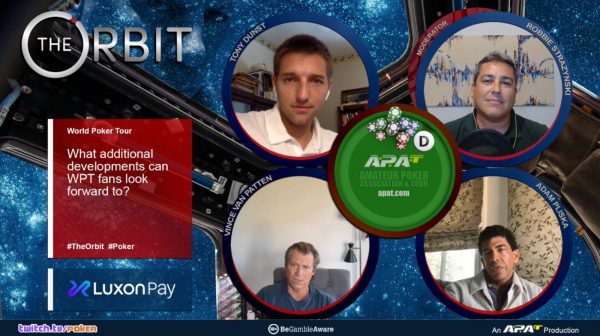 Having started out with the WPT as the company’s Legal Counsel, Adam quickly rose within the ranks to become CEO, a title he’s held for over a decade and a half as the “head of the family”.

Vince has been a featured World Poker Tour co-commentator for 20 years, throughout the lifetime of the company. He’s also a former professional tennis player as well as a Hollywood actor with numerous film roles to his credit.

First having joined the WPT as host of the Raw Deal segments, and later moving into the commentary booth upon the retirement of the late Mike Sexton, Tony’s been with the company for over 12 years. Away from the booth, as a player, he’s also won a WPT Main Event title along with 2 WSOP bracelets and close to $4 million in career live tournament earnings.

We start off the show by noting that the WPT is unique in our industry among the overwhelming majority of poker companies in the way it generates revenue; i.e., not from the players themselves. We ask the panelists to describe the way in which WPT makes its money and why that relatively unconventional route has always made the most sense over the course of the company’s 20-year-long history?

Turning to our second topic, we note that just like online poker needs liquidity to flourish, so too does the WPT need viewership growth to keep succeeding. We ask the panelists to describe what sort of challenges the World Poker Tour has faced in that regard over the last two decades — specifically as viewer attention is so much harder to capture in an increasingly divided media space – and how the WPT has overcome it?

In the second half of the show, after viewing a hand showcasing the impeccable WPT production quality, we transition to our third topic. During the pandemic, online poker experienced a bit of a resurgence, and with the pandemic subsiding, live poker seems to really be roaring back. Every poker tour is fighting hard for a big piece of the player pie. We ask the panelists how they see the World Poker Tour fitting into that picture in 2022 and attracting as many players as possible to the felt for its events.

Finally, we end off the show by noting that there have already been some big changes and announcements to mark the World Poker Tour’s 20-year anniversary. There’s a new logo, Steve Aoki has been brought on as an ambassador, there’s WPT Prime now (replacing WPTDeepstacks), and of course the new Player of the Festival award… We ask the panelists to share or tease something extra that viewers and players can look forward to as the WPT’s 20th anniversary year progresses.

Watch Episode #16 of The Orbit now on Twitch.tv/poker.