Home POKER NEWS WPT’s Player of the Festival: Matt Savage Explains What It's All About
POKER NEWS

WPT’s Player of the Festival: Matt Savage Explains What It’s All About

The World Poker Tour’s 20th season has a lot of things to offer players and fans in 2022. From new ambassador Steve Aoki to new WPT Prime events, there is something for everyone. One of the most popular innovations for the coming season, however, is the new Player of the Festival award that goes to the dominant player each time the WPTDeepstacks pitches up around the world. 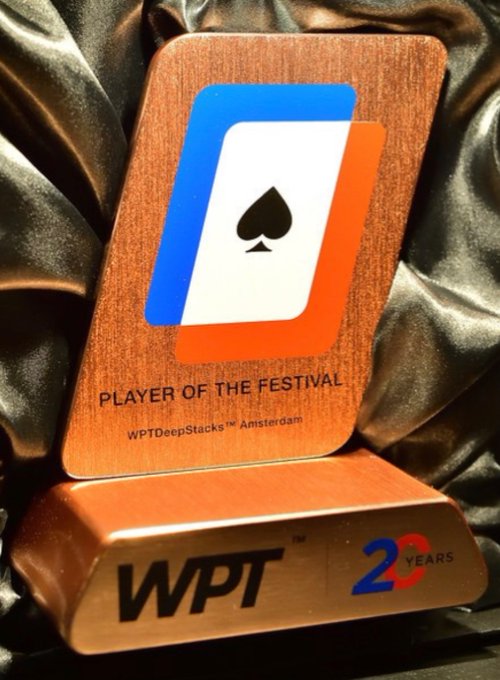 With the new award having just premiered recently in the Dutch capital of Amsterdam, we caught up with multi-time Global Poker Index award-winning WPT Executive Tour Director Matt Savage to find out how it went.

“You couldn’t be more right about the history of the event,” Savage says. “Having the World Poker Tour back at Holland Casino Amsterdam for the first time in two years just felt right. Our Tour Management team worked tirelessly to make sure this event was a success and the 757 entries — the largest WPTDeepStacks Amsterdam ever – are a testament to that hard work.”

The level of entries is always the surest sign that a poker event has been a success, but player feedback is just as important to the WPT team. There was a real motivation for inclusion behind the Player of the Festival award. Savage reveals the influence was ‘the players’.

“We’re in our 20th season and want to make sure that the player experience stays at the forefront of everything we do.” He says. “The Player of the Festival program, which includes a WPT Prime passport as the prize, just gives our players another way to celebrate our players at every stop.”

Players were delighted to have the extra prize to shoot for and in the cosy yet open casino that is a stone’s throw from the banks of the Amstel, a positive player atmosphere was crucial. The Player of the Festival award was key to achieving that.

“It was very well received. As the festival advanced, players were looking to see where they stand and who the current leader was. I was happy to see players excited about it.”

As Savage describes, the scoring system for any leaderboard is always going to be tricky, but in the Dutch capital, everything went to plan.

“For Amsterdam the system worked perfectly,” says Savage, confirming that the innovation will stay. “We’re confident that what we have is very solid. We will be running our Player of the Festival program at every WPT stop in 2022. This includes WPT Seminole Hard Rock Poker Showdown and WPTDeepStacks Sydney, which are both underway now as well as the upcoming WPT Choctaw and the WPT Prime stops in Vietnam, Cambodia, and Taiwan.”

Just as with so many poker innovations, the truest test of whether it is successful is always measured by time.

“Like every WPT product, we’re going to listen to feedback,” admits Savage. “That being said, we worked with a very talented statistician to help us develop the scoring system and ran multiple simulations over various historical festivals to make sure we were happy with the system.”

The debut Player of the Festival award was, as Savage has described, fought for with energy and passion. “It was eventually won by Fabio Peluso, who earned the title and the €1,100 WPT Prime Passport thanks to a pair of cashes. He just has to figure out where he wants to use his Passport.”

For his prize, Peluso will take home a WPT Prime Passport worth €1,100! pic.twitter.com/hPIAwqWbtG

With a wide range of events taking place on this year’s Season XX of the World Poker Tour the choice is vast for the highly skilled Italian. The World Poker Tour’s Player of the Festival award is sure to be a big hit with players who buy in directly, qualify through live in-casino satellites and even Club WPT members who make travelling the world to play WPT events their ‘hobby hustle’.

The Player of the Festival points system is clear and easy to understand, with a sliding scale of prizes based on the tournament buy-in via which players have qualified to win points.

As the World Poker Tour moves on to stops in Australia, the Far East and America, how each Player of the Festival enjoys winning the extra prizes will likely build the interest others have in becoming the latest incumbent of that entitlement.

Just like the World Poker Tour trophy awarded to each Main Event winner, namely the WPT Mike Sexton Champions Cup, becoming the Player of the Festival is a matter of real pride already and we can only see that growing and growing… along with the prize pools and attendances if Season XX’s opener is anything go by!