The Venetian‘s poker room has been one of the top spots to play poker on the Las Vegas Strip since it opened years ago. Home to one of poker’s most beloved tournament series (the 4 times yearly Deepstack Extravaganza), the Venetian is a favored poker vacation destination for many. Over the summer, millions of dollars were invested into upgrades to make the poker room one of the biggest and best on the Strip. Rebranded as the Sands Poker Room at the Venetian, it will now sport 59 tables and have enough room to seat up to 600 poker players simultaneously. 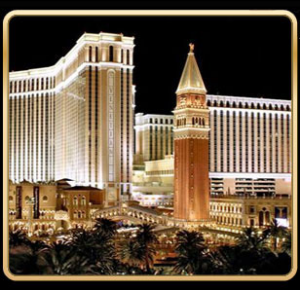 Though the all-new room officially debuted back on September 5th, they’ve waited until the 28th (this Friday) to mark the occasion, and there’s PLENTY to celebrate.

To start off, Happy Hour will last twice as long, as no rake will be taken from any cash games played from 5–7 p.m.

Then, from 7 p.m. until midnight, it’s almost a guarantee that the room will be packed with players eager to cash in on the many giveaways, which will occur every 15 minutes and include:

On top of that, players will benefit from free food throughout the evening!

If it seems like you’ve been hearing a lot about the Venetian lately in connection with poker, it’s not an accident. About a month ago we reported that a Jewish Poker tournament would most likely be taking place at the Venetian this Christmas.

On top of that, poker’s biggest story as of late (arguably of the year) has been the Lederer Files. If you’ve watched even a little of the video interview with Howard Lederer, you can’t help but notice that the huge Venetian sign is visible in the background almost the entire time. The interview did indeed take place at the Palazzo (the Venetian’s sister property) and the hundreds of thousands of views it got have probably gotten the Venetian some of the best “subliminal advertising” exposure in its history.