Regaining My Sanity Thanks to Live Poker

I might not ever go back to online cash game streets again. I had played around 99 percent of my lifetime hours at the poker table online, up until around two months ago. Thanks to an Upswing Poker Lab subscription and a general immersion into the game over the past three years, I got to a point where I could generate a decent win rate at 50NL online. Not exactly Doug Polk stakes or anything like that, but poker study and play became my main hobby.

I imagine the same is true of folks in the Garden State who enjoy poker at all licensed online casinos in NJ. Especially with so many live poker venues around the country shuttered  for the majority of 2020, most people turned to the online realm to scratch their poker itch.

By February 2021 I had had enough though. After 11 months of the COVID-19 era, I found myself just wanting to get out and do something in my free time. My only trip to a live poker room in the previous year came last July, when I checked out Ocean’s Eleven Casino, a short drive north from my San Diego home. I thought Ocean’s Eleven did about as good of job as could possibly be expected with its sanitation protocols. That always stuck with me over the next few months, and with that in mind in February I decided it was time to get out there and experience the San Diego live poker scene. 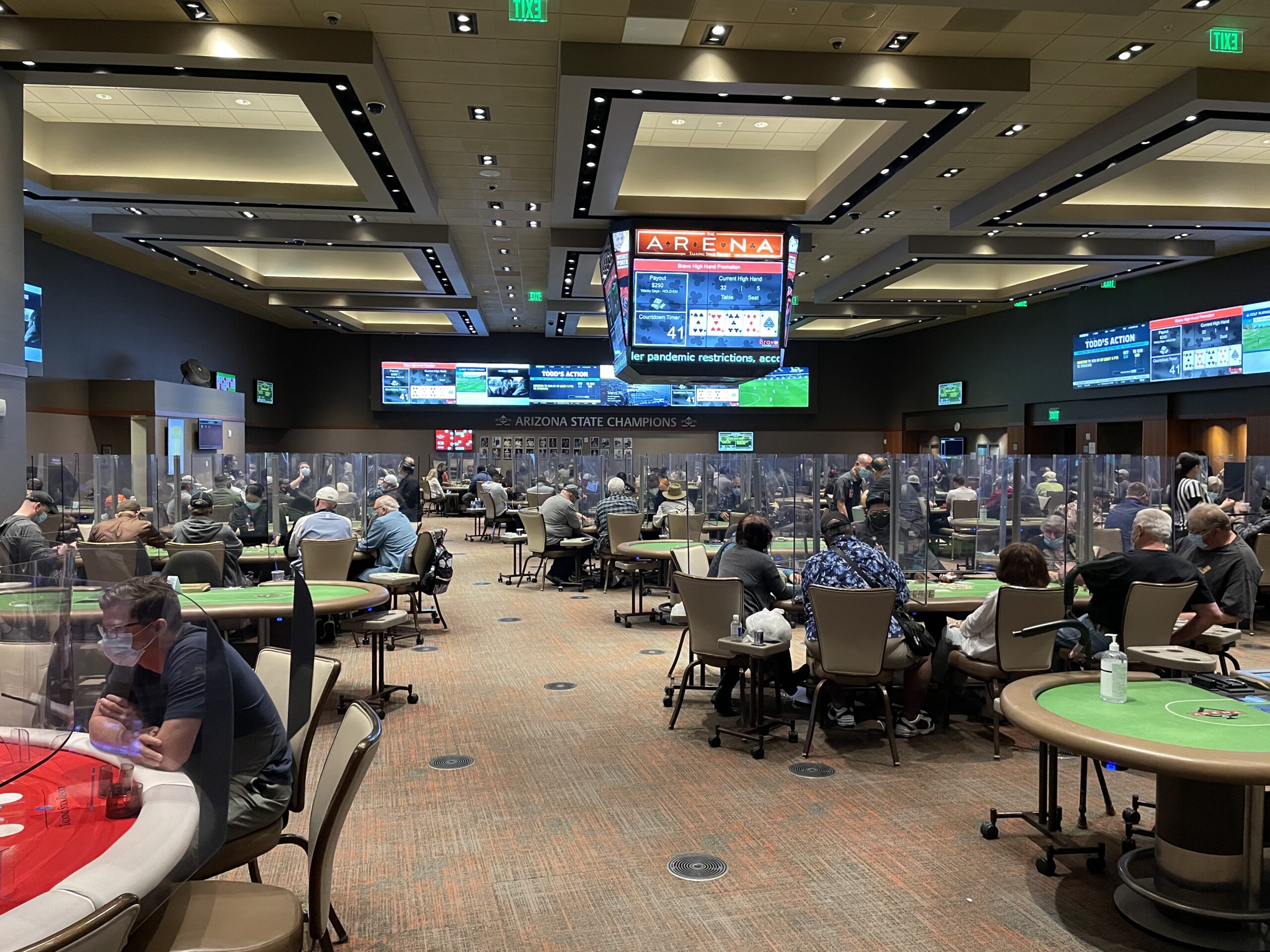 The Fulfillment of Live Poker

My first foray back into San Diego live poker involved a trip to Seven Mile Casino. The Chula Vista, California, cardroom stands as the closest poker venue to my place, and I can get there in about 10 minutes if traffic conditions are right.

My first few sessions at Seven Mile went very well, however, diverting my attention to chip stack photography instead. 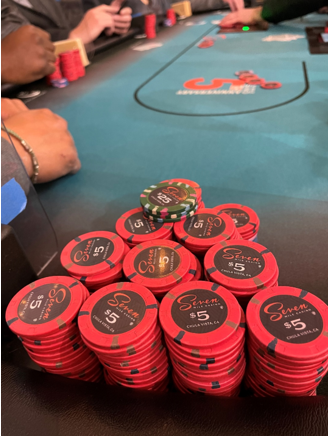 That beginner’s upswing has since come back down to earth a bit, but the $2/$3 NL cash games are consistently great at Seven Mile. The entertainment value alone makes it worth the trip every time, and I get a little bit of actual real-life human socializing that’s been sorely missing from my life over the past year.

My favorite character so far was wandering around my table for about 20 minutes one night, beer in his grip and random comments on hands readily flowing. I thought this guy must be sweating a friend at my table, but that wasn’t the case as I was about to find out.

He goes off to another corner of the cardroom, but then gets seated at our table. The chip runner informs us to “buckle up” as she puts his chips on the table and he approaches with another beer. This player employed a strategy that made him a welcome presence among the rest of us. He was certainly a “fun player,” but as his latest beer dwindled his tone became a bit darker.

He asked the dealer to cut the deck after an automatic shuffle, to which the dealer replied was against protocol. Our fun player started going into conspiracy theories about how the automatic shuffler rigged the deck for certain players, employed by Seven Mile to sit undercover at the $2/$3 tables and steal money from unsuspecting customers.

As time went on, this man tried to figure out who was the “mole” at the table. He would eliminate players from his list of possibilities based on their play, kind of like playing Clue.

This guy wasn’t just joking around; it 100 percent appeared that he actually believed in $2/$3 moles and rigged shufflers at Seven Mile. Some of the other players were getting legitimately agitated, which I completely understood.

I was stifling laughter and trying not to lose it though. This was the kind of entertainment you don’t get at the online tables, and I would welcome this guy back any time as long as the game is in a public space.

Seven Mile Casino has become my home cardroom, but I have to get down there by early afternoon on most days to get a quick seat.

The poker games seem to be doing very well, and even spill over into the Pai Gow tables from time to time. One poor guy sat down and started playing Pai Gow last week, unaware that he was in a Texas Hold’em game. 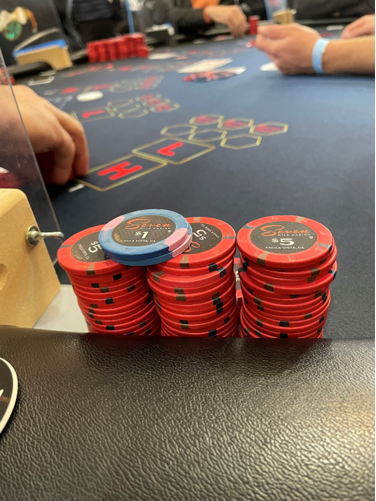 Setting my sights beyond the confines of San Diego, I took a four-day weekend trip out to Phoenix to see my buddy last month, with the plan of putting in some hours at a couple of the city’s poker rooms. Arizona laws don’t allow No-Limit betting on poker games, so the casinos offer spread-limit hold’em instead.

Right from the airport I drove my rental car to Talking Stick Resort. The Scottsdale tribal casino hosts the state’s biggest poker room, The Arena, and I wanted to get into a $3-300 spread limit game there.

The game allows a $600 max buy-in, and the maximum raise or bet at all times is $300. A little different than No-Limit Hold’em, and I made sure to read up on spread-limit rules before I made the trip.

The waiting list for the $3-300 game at The Arena was about 40 deep when I got there, as only about half of the 47 tables were in play due to COVID-19 protocols. I grabbed some food and wandered around for about two hours, then my name was finally called.

The Arena is one of the most impressive poker rooms I’ve ever seen. It certainly looks and feels like you’re stepping into a poker arena to compete. 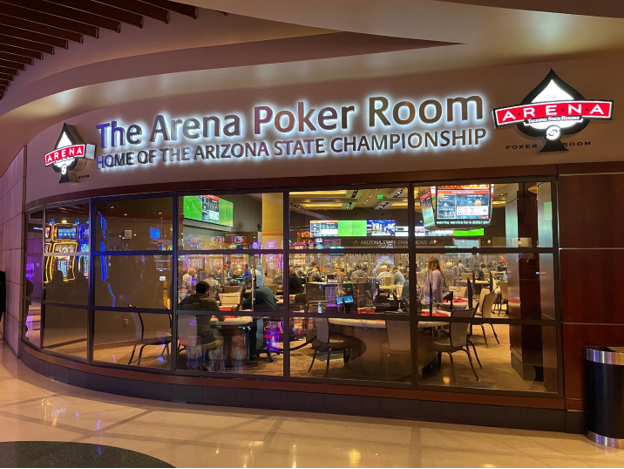 The Arena in Scottsdale, AZ truly lives up to the name.

Unfortunately, I got my ass kicked in The Arena and the only chips I added to my stack were the ones I was buying from the chip runner. With that said, it was a really impressive, clean, and visually pleasing setup, and you better believe that I’ll be coming back to reclaim the $400 I lost to the Arizona locals very soon.

I checked out one more room in Arizona, playing a short $3-100 spread-limit session at Gila River Wild Horse Pass. That one didn’t go so well either, but overall I had a lot of fun investigating Arizona’s live poker rooms and talking to some of the players.

This new venture into live poker opened up some new entertainment channels for me at home as well. I recently finished up a 91-episode binge watch of Johnnie Vibes’ vlog, the first time I’ve gone through any poker vlog from start to finish. I’m doing the same with Andrew Neeme’s vlog at the moment.

Partially inspired by Johnnie Vibes’ Texas travels, I’m planning on heading out to Austin soon to check out the city and the poker rooms. I’ve heard Texas Card House is the spot in Austin, but I’m planning on checking out at least 3-4 other poker clubs out there as well.

The Austin trip will hopefully result in a June article for Cardplayer Lifestyle with massive chip stacks as the featured image. This will be the first time I’ve gone on a solo trip with live poker as the main focus, and I can’t wait!